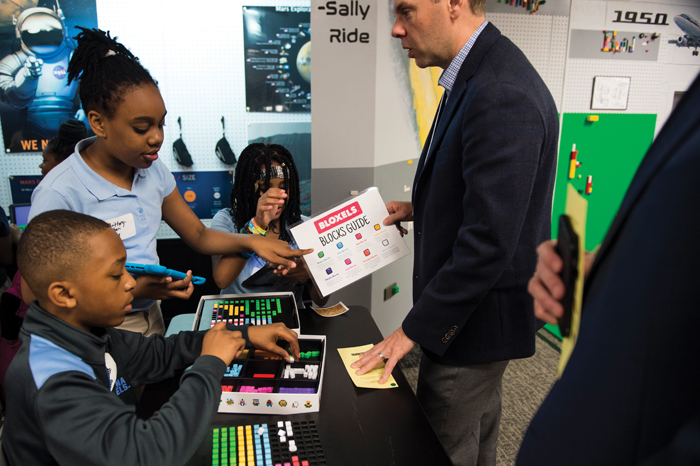 Brittany Sheri, 10, left, points at the Bloxels Blocks Guide and with Gregory Little at Horizons Unlimited on April 26, 2018. (Photo by Rebecca Benson)

SALISBURY — When out-of-towners visit Horizons Unlimited for the first time, Executive Director Amy Pruitt tells them, “You have to get under the stars.”

More than 50 representatives from school districts across the nation kicked back in the canted seats of Horizons Planetarium Thursday, eager to learn about stars and Rowan-Salisbury Schools.

The tour was part of a visit from Digital Promise’s League of Innovative Schools, which chose to hold its Spring biannual meeting in Salisbury. The league is made up of 93 school districts — including Rowan-Salisbury Schools — who are all pushing for digital innovation.

“We try to share best practices and scale them up across the country,” Rowan-Salisbury Schools Superintendent Dr. Lynn Moody said.

The league initially planned to visit Rowan-Salisbury in April 2017, but made a decision to pull out due to HB2 travel bans, which affected several of its members. But after the bill’s rollback, Moody said, the league gave the district another shot.

“It is a tremendous honor that the league believes that we are innovative enough to come visit and see what we’re doing,” she said.

Visitors from as far away as Washington state spent Thursday touring facilities, talking to students and experiencing the best Rowan-Salisbury Schools had to offer.

Steven Webb, superintendent of Vancouver Public Schools in Washington, said he was “absolutely thrilled” to be able to visit. Early that morning, he and others toured the district’s innovation classroom at the Wallace Educational Forum and spoke to students. The rest of the day’s agenda included the visit to Horizons, a sampling of West Rowan High School’s farm-to-table program and a look at blended learning at South Rowan High.

But Webb said he was most impressed by the passion he saw — the commitment from staff and the excitement of students.

Lorrain Lange, former superintendent of Roanoke Rapids Public Schools and strategic academic advisor for Power School, said she was particularly impressed with some kindergarten students she’d spoken to. Despite being so young, the students were already working on coding and on filming and producing broadcasts.

“When you think that they were just born five years ago, and they’re using technology and helping to develop technology. …What were we doing five years ago?” she said with a chuckle.

Other visitors said they were also impressed with student work — especially the problem-based learning activities that have students learn academic concepts by solving a real-world problem.

“So what I see kids doing is academic tasks that are going to prepare them well for jobs,” said Chris Gdowski, superintendent of Adams 12 Five Star Schools in Denver, Colo.

But the opportunity was also a good one for students, Moody said. Students got to show off what they’d learned. One student even had the opportunity to pitch a coding program he was working on in front of a crowd that included research universities and educational vendors.

“The power of this is students getting to showcase their work to a real national audience. That’s much more powerful than filling out worksheets,” Moody said.

After their tour of Rowan-Salisbury, visitors returned to Charlotte to visit other schools in the area.