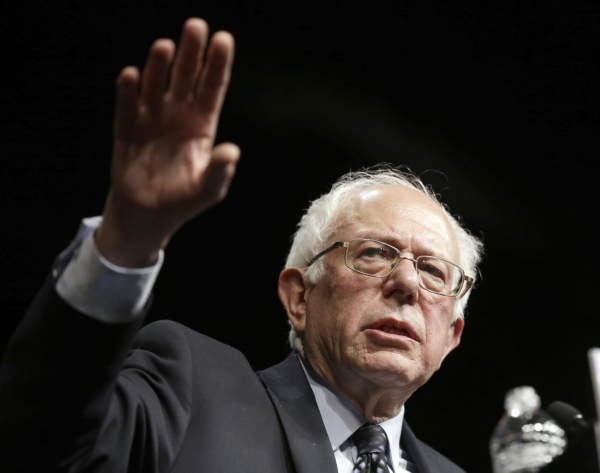 Cal Thomas: ‘Crazy Bernie’ is at it again

There he goes again.

Despite the lowest unemployment rate in 17 years, including declining rates for minorities, Sen. Bernie Sanders (I-Vermont), affectionately called “crazy Bernie” by some conservative talk show hosts, is again flirting with the idea that the federal government should guarantee every American a job, paying a minimum of $15 an hour and health care benefits.

The Washington Post reports the plan would “fund hundreds of projects throughout the United States aimed at addressing priorities such as infrastructure, health care, the environment, education and other goals. … every American would be entitled to a job under one of these projects or receive job training to be able to do so, according to an early draft of the proposal.”

Are we not already spending plenty on these “priorities”? Just on education, record spending hasn’t helped improve the knowledge of students. They still lag behind students in other countries when it comes to science and math, and, apparently, even English, as the overuse of the words “like” and “you know” have dumbed down our common language.

What is it about socialism that remains so attractive to many liberals? In most communist countries, it is a form of mutually-shared poverty. At a minimum it starves incentive.

A thriving economy is the best guarantee of a job. The American economy is now thriving, expanding at an annual rate of 2.9 percent, which many economists said just a few years ago was impossible to expect. According to Tradingeconomics.com, the “unemployment rate is expected to be 4 percent by the end of this quarter” (it is now 4.1 percent). Going forward, it says, “We estimate the unemployment rate in the United States to stand at 3.80 in 12 months.”

The goal of Sanders and others in the guaranteed-income crowd, according to Darrick Hamilton, an economist at the New School and Stony Brook University’s Stephanie Kahn, who are quoted by The Washington Post, is to “eliminate working poverty and involuntary unemployment altogether.”

Wait, hasn’t that already been tried? The Great Society programs launched more than 50 years ago by President Lyndon Johnson had similar goals. They have so far cost a collective $22 trillion. While those programs include Medicare and Medicaid, which are long overdue for reform, the poverty rate in America is roughly the same as it was in the mid-1960s.

According to the Library of Economics and Liberty, “The United States produces more per capita than any other industrialized country, and in recent years governments at various levels have spent about $350 billion per year, or about 3.5 percent of gross domestic product, on programs serving low-income families. Despite this, measured poverty is more prevalent in the United States than in most of the rest of the industrialized world.”

If government spending is the solution, wouldn’t the problem of poverty and the dwindling number of unemployed be solved by now? How will more spending (and the inevitable higher taxes and increased debt) improve their lot?

Sanders’ proposal is as likely to win approval as McGovern’s failed to do in 1972, but it taps into a growing feeling, particularly among many young Americans, for whom feelings, not results, are ultimately what liberalism relies on. Many liberals feel corporations are evil, that some people are paid “too much,” “income inequality” is something that should be addressed by government and, because some people make more money than others, America is an unfair nation.

This worldview did not build America, and if it ever takes over, it will never sustain us. Consider where it has been tried.

By Sharon Randall When I think of things that reaffirm my faith in a loving God, I think of babies.... read more