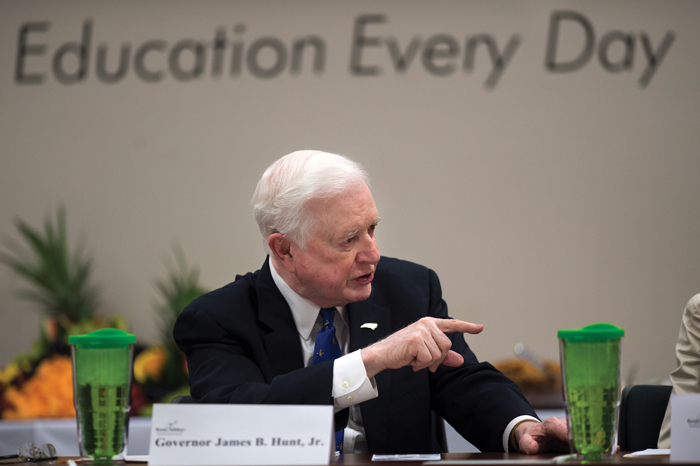 Hunt is the state’s longest serving governor, and is often called “the education governor” for his focus on schools and early childhood education. After hearing about ApSeed, which provides free e-readers loaded with literacy apps to at-risk children in Rowan and Davie counties, Hunt journeyed to Salisbury to learn more.

“This is one of the times where you don’t sleep the night before,” Superintendent Dr. Lynn Moody said of the visit.

Moody said that Hunt, along with ApSeed founder and CEO Greg Alcorn, are her “heroes in public education.”

“I don’t know anybody who is better role models in the world of public education,” she said.

Hunt said that he spent his time as governor learning — a practice he still carries on today. And it brought him to an important conclusion: the years before kindergarten are vitally important.

It was the same conclusion Alcorn reached a few years ago, which led him to launch ApSeed. Alcorn and ApSeed seek to correct the vocabulary and learning gap that exists between at-risk students and their affluent peers. If it’s not caught early enough, research shows, that learning gap can remain for a lifetime.

Alcorn hopes to put an e-reader — called a “seedling” — into the hands of every child in Rowan County, so that all will have access to books and learning tools.

Hunt believed it could go bigger.

“We see some possibilities here with the technology you are developing for the earliest years,” Hunt said.

Seedlings are custom built e-readers, and lack cameras or ability to alter programs or download games. They can only be used by children to read and learn.

“The seedling follows the child,” Alcorn said. “It is of value only to the child.”

ApSeed has more than 1,000 readers in circulation within Rowan County, and Alcorn said the company’s goal is to reach 6,000 by the end of the year. The eventual goal is for every child aged 0 to 4 in Rowan and Davie counties to have a seedling.

The hope is to see improvements on kindergarten assessments and the third grade reading test — and to change the future.

“We’re not trying to change a generation,” Alcorn said. “We’re into generational change.”

“We have seen some growth, some improvement, since we’ve piloted ApSeed,” she said.

A representative from Partners in Learning told Hunt that, contrary to what some might think, the readers actually helped younger children be more social as they read books together or showed each other how to navigate the devices.

For Hunt, programs like ApSeed have the potential to take North Carolina into the future.

“We need to constantly be thinking about what the future is going to be like, and how we can participate in it,” he said.

Hunt left ApSeed and the other organizations with some encouragement for the months and years to come.