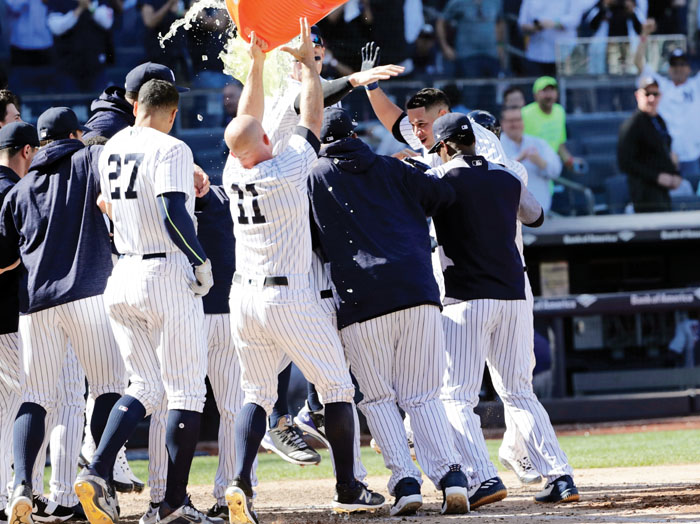 New York Yankees' Gary Sanchez, second from right, celebrates with teammates as he reaches home plate after hitting a three-run home run during the ninth inning of a baseball game against the Minnesota Twins Thursday, April 26, 2018, in New York. The Yankees won 4-3. (AP Photo/Frank Franklin II)

NEW YORK (AP) — Gary Sanchez had a moment he will remember.

Sanchez hit a three-run homer off Fernando Rodney in the ninth inning, and the New York Yankees rallied to beat the Minnesota Twins 4-3 to complete a four-game sweep and extend their winning streak to six.

“It’s definitely a very exciting moment,” Sanchez said through a translator. “The other special moment for me was when we made it to the playoffs last year, so this one is definitely up there.”

New York was held hitless through five innings and trailed 3-0 before Aaron Hicks’ sacrifice fly in the seventh. Didi Gregorius grounded to third leading off the ninth and reached second when Miguel Sano’s throw went wide for an error.

“I just couldn’t complete the play,” Sano said through a translator.

Giancarlo Stanton followed with a slow roller gloved by a charging Sano, who did not make a throw as Stanton crossed first with an infield hit.

“That’s just a swinging bunt,” Twins manager Paul Molitor said. “It’s one of those plays where he split (Ehire) Adrianza and Sano there. Either one didn’t have much of a chance.”

Sanchez took a strike, then sent a fastball from Rodney (1-2) down the left-field line and into the lower deck. The Yankees bounded out of the dugout to mob Sanchez as he crossed the plate and doused him with Gatorade.

“If we can get traffic on the bases, we’re always one swing away with our guys,” rookie manager Aaron Boone said.

New York finished an 8-2 homestand and has outscored opponents 47-13 during its winning streak.

“We’ve got a lot of fight in here, a lot of bulldogs,” Yankees starter Jordan Montgomery said.

Minnesota completed an 0-7 trip, its first winless road swing of at least seven games since Aug. 10-16, 2001. The Twins have lost eight straight to New York, including last year’s AL wild-card game, and 13 of their last 14 at Yankee Stadium, counting the postseason.

“I think this is going to build up the character of this team,” Minnesota general manager Thad Levine said.

Dellin Betances (1-1) struck out the side on 13 pitches in the ninth for his first win since June 27. The big right-hander struggled to keep from flying open on his delivery during the second half last season and early this year, causing control problems.

“I felt really good,” Betances said. “I felt like I was attacking with both pitches today.”

Rodney has blown three of five save chances.

“I tried to get a ground-ball double play,” Rodney said. “I left the pitch a little bit high in the strike zone.”

New York has homered in 11 straight games, the longest streak in the major leagues this season.

Aaron Judge walked twice on his 26th birthday and has reached safely in 30 consecutive home games and in all 21 games this month.

PITTSBURGH (AP) — Corey Dickerson hit the first game-ending home run of his major league career, a disputed one-out drive in the ninth inning off Alex Wilson, (0-1). A fan reached over the 21-foot wall and caught the ball, and the home run was upheld in a video review.

PHILADELPHIA (AP) — Jarrod Dyson, Nick Ahmed and David Peralta homered as Arizona improved to 17-7 and matched the 2008 Diamondbacks for the best 24-game start in franchise history

Dyson hit a two-run homer in the first and Chris Owings added an RBI double off Ben Lively (0-2) for a 3-0 lead.

TORONTO (AP) — J.D. Martinez hit a three-run homer, and Chris Sale (2-1) won for the first time in three starts, allowing three runs and four hits in six innings to improve to 5-1 in eight games at Toronto.

Andrew Benitendi had two hits and an RBI for the Red Sox, who rallied from a 3-1 deficit. The Red Sox are a major league-best 19-5, including 7-1 in one-run games.

Craig Kimbrel got three straight outs for his seventh save in as many chances, finishing a six-hitter.

CLEVELAND (AP) — Nelson Cruz and Kyle Seager hit consecutive doubles in the eighth off Nick Goody (0-1), who relieved with the score 4-4 because regular setup man Andrew Miller is on the disabled list.

Dan Altavilla (2-2) got the last two outs in the seventh. Edwin Diaz pitched around a ninth-inning walk for his major league-leading 11th save.

Carl Edwards Jr. worked the eighth and Brandon Morrow finished the six-hitter for his fifth save.

Kris Bryant missed his third straight game after he was beaned during a victory at Colorado last weekend.