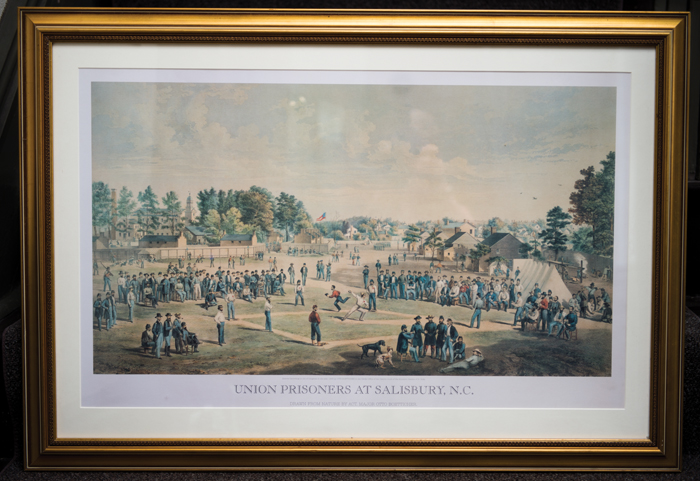 This is a Rowan Museum copy of the 1863 lithograph depicting Union soldiers playing baseball at the Salisbury Confederate Prison. Rebecca Benson/Salisbury Post

SALISBURY — A New Jersey auction house has placed on the selling block a notable print related to the Salisbury Confederate Prison.

Robert Edward Auctions of Chester, New Jersey, places the value of the 1863 lithograph by Otto Boetticher at $10,000. The company said in a news release Thursday that bidding for the print is currently at $5,700, inclusive of the 20 percent auction premium.

The sale concludes May 6.

The color lithograph, thought to be one of the earliest artistic depictions of baseball, shows Union soldiers playing a spirited game while under Confederate guard in Salisbury. The prison, burned by Union Gen. George Stoneman in April 1865, was located in an area off East Bank Street, not far from today’s downtown.

The auction company describes the lithograph as “one of fewer than a dozen prints of this scene known to exist.”

Rowan Museum has one of the originals, on loan from a local individual, in its Civil War exhibit at 202 N. Main St. The museum also has a copy of the print hanging near the front entrance, and it sells copies of the baseball print.

Another original is said to be at Reynolda House in Winston-Salem. Two other known prints are housed in the National Baseball Hall of Fame and the New York Public Library.

“The piece has long been considered by historians and collectors to be one of the most impressive and important images of early baseball,” the company said. “The Civil War was largely responsible for the game of baseball spreading throughout the country.

“Thousands of soldiers learned to play baseball during the Civil War, and upon returning home, they introduced the game to friends and neighbors in their hometowns.”

Boetticher was a captain in the 68th New York Volunteer Regiment. He drew the piece from observations while a prisoner at the Salisbury camp in 1862. After his release in September 1862, which came during a prisoner exchange, a print of the drawing was made available by a New York publisher.

“This newly documented example has been in the same family for generations,” the auction house said.

Robert Edward Auctions describes itself as one of the world’s largest specialty auction houses devoted to the sale of sports cards, memorabilia and Americana. It has sold more than $100 million worth of collectibles in the past decade, according to the news release.

More information about the Salisbury Confederate Prison baseball print can be found at www.RobertEdwardAuctions.com.