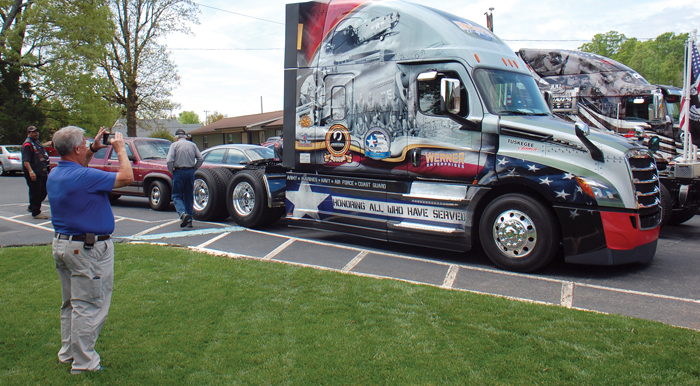 “I had to go back home and get my camera,” said Wayne Hinson, who was taking snapshots of the beautifully wrapped trucks whose themes were the 100th anniversary of the Native American Code Talkers, the 75th anniversary of the Tuskegee Airmen entering combat and a celebration of North Carolina’s military bases.

Powles Staton Funeral Home of Rockwell sponsored the third annual Veterans Appreciation Day. Military veterans were invited to enjoy a free lunch of hot dogs and hamburgers from the Hot Dog Shack trailer, along with other refreshments.

They also could sign up for a drawing for a highly valued gift card basket. And the Freightliner Ride of Pride trucks were a bonus. The trucks will take part in the annual Rolling Thunder event in Washington, D.C., over Memorial Day weekend.

Powles Staton officials said it was their biggest veterans crowd yet. They had to find extra tables and chairs and put them on the lawn, but one one was complaining.

“I think we’re going to have to build a bigger portico,” Will Staton said.

In conjunction with those tributes, Powles Staton accepts new unwrapped toys as donations for its Operation Toy Soldier program, which provides those gifts to N.C. military families at Christmas.

The funeral home also accepts worn U.S. flags, used during cremations as a way to honor veterans and properly retire the flags.

“Today we got our first 48-star flag,” said a thrilled Russ Roakes of the Powles Staton staff.

Through flag receptacles around the county, Roakes said he has collected about 5,000 used U.S. flags for the Retire Your Flag With Honor program.

Freightliner employee Mike Satterfield, a 1987-92 Marine Corps veteran, was one of the men sharing with the veterans some of the history behind the themed trucks.

High Performance Graphics of Hickory provides the colorfully designed wraps for the trucks, all of which Freightliner will present May 24 to the companies that specially ordered them.

The Code Talkers truck goes to Chief Express of Seagrove; the Tuskegee Airmen, to Werner Enterprises; and the N.C. military bases, to Cargo Transporters of Claremont.

“It’s a head-turner,” Satterfield said of the latter star-spangled truck. “They all are.”

The only people who aren’t looking at the military-themed Freightliners as they go down the road are people on their cellphones, Satterfield said.

Freightliner started producing the special Ride of Pride military trucks in 2002. A fourth truck is scheduled to be ready in June.

“For us, this is what it’s all about, honoring our veterans past, present and future,” Satterfield said.

Gary Basinger, who served in the Air Force and flew in and out of Vietnam as a crew chief on C-5As from 1968-72, spent considerable time viewing the trucks.

Some of his Air Force missions were grim, having to transport the bodies of U.S. soldiers to Dover Air Force Base in Delaware. Having a random day just to say thanks to veterans didn’t go unnoticed by Basinger.

“They appreciate it,” he said of his fellow brothers in arms. “They really do.”