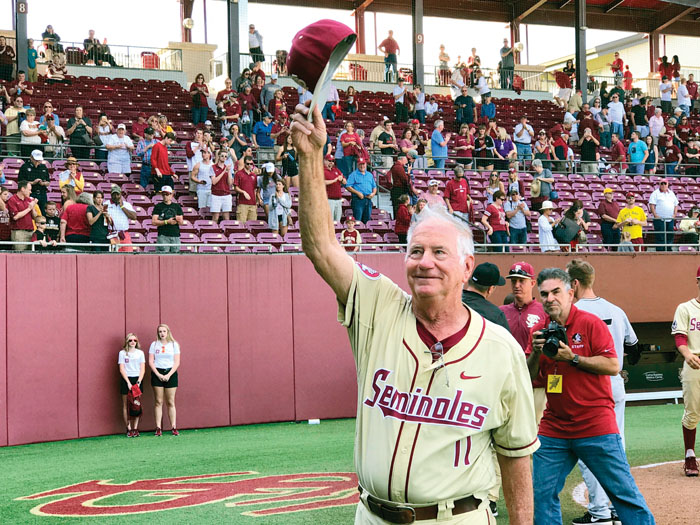 FILE - In this Feb. 19, 2017, file photo, Florida State coach Mike Martin salutes the crowd at Dick Howser Stadium in Tallahassee, Fla., after he got his 1,900th win when the Seminoles defeated VCU 11-3 in an NCAA college baseball game. Mike Martin has seen college baseball grow nationally in his 39 seasons as Florida State’s coach. His success leading the Seminoles though has remained a constant. Martin, who has 1,974 wins, needs three more to pass Augie Garrido for the most victories in NCAA baseball history. He could get the milestone this weekend when Florida State hosts Miami in a three-game series, April 27-29, 2018, in Tallahassee. (AP Photo/Joseph Reedy, File)

TALLAHASSEE, Fla. (AP) — Mike Martin has seen college baseball grow on and off the diamond during his 39 seasons roaming Florida State’s dugout.

And the Seminoles coach has won along the way — a lot.

Martin, who has 1,973 wins, needs three more to pass Augie Garrido for the most victories in NCAA baseball history. He could get the milestone this weekend when Florida State hosts Miami in a three-game series.  If it doesn’t happen this weekend, Florida State’s next series wouldn’t be until May 5, when the Seminoles open a three-game set at Clemson.

While Martin has fielded more calls from friends and former players as he nears the record, the 74-year old coach has tried to keep the focus on his team. The Seminoles (29-14) are just 7-6 this month.

“I can honestly say that getting the record means a lot to me, but at the present time it doesn’t mean as much as getting our team pointed in the right direction,” he said. “We have some young men that are struggling and they’re pressing. It’s my job as a coach to try to get them in a good mood.”

Martin moved into second place during the Atlantic Coast Conference tournament in 2016. But it wasn’t until Garrido resigned at Texas two years ago that Martin’s chase of the record truly began. While Garrido’s 1,975 victories came at five different schools, including San Francisco State, Cal Poly, Cal State Fullerton and Illinois, all of Martin’s has come at his alma mater, which is an NCAA record.

Martin said the last time he saw Garrido was at the College World Series last year. Garrido died on March 15 after suffering a stroke.

Mark Marquess, who retired last year after 41 seasons at Stanford, had a friendly rivalry with both coaches. Even though both had different personalities — Marquess said Garrido was more gregarious while Martin was more laid back — the thing they had in common was being authentic and successful.

“What I liked about both guys was what you see is what you get. They don’t put on any airs and those qualities are reflected in their players,” Marquess said. “I know they were my two idols and helped mentor young coaches.”

Martin graduated from Florida State in 1966 before returning as an assistant in 1975 for Woody Woodward (1975-78) and Dick Howser (1979). When Howser was hired to manage the New York Yankees in October of 1979, Martin was promoted to head coach.

Things were a little different when he Martin managed his first game on Feb. 24, 1980, — coincidentally against Miami:

— ESPN had been on the air less than six months.

— Getting a pitcher who could throw 90 miles per hour or above was like winning the lottery.

— College baseball was still mostly a niche sport, dominated by warm weather schools in the South and West.

Going into this weekend’s series, all three games will be televised and most of FSU’s pitchers can regularly throw over 90. Martin said the biggest change he has seen is the increased talent level throughout the nation.

“We’ve got seven guys that throw 90. We used to have one or two and think, “Yeah!” Now we got seven,” Martin said. “You got an arms race going. And that’s good, because people come to see the spectacle.”

What hasn’t changed is Florida State’s place as a national contender.

Martin’s .736 winning percentage is the highest among active coaches. The Seminoles have won 40 or more games and reached the NCAA Tournament 40 straight seasons. Both are the longest active streaks in the nation.

San Francisco Giants catcher Buster Posey, who is one of 49 players under Martin that have reached the majors, regularly keeps in touch with his former coach and says the run of consistency continues to surprise him.

“His enthusiasm and knowledge of the game is pretty incredible to think about,” Posey said. “It could be the middle of August and he is yelling and bringing that enthusiasm to practice.”

ESPN baseball analyst Eduardo Perez, who played for Martin from 1989-91 before a 13-year career in the majors, said Martin’s attention to teaching the fundamentals on and off the field remain as strong as ever.

“When I left Florida State I might not have a national championship but I knew I was ready to encounter anything at the professional level,” he said. “I was fundamentally sound and mentally prepared.”

Florida State has accomplished everything except winning a national championship. Martin’s teams have made 16 trips to the College World Series — including last year — but have only reached the finals twice (1986 and ‘99).

Even though Martin has made no secret of how much he wants the wins record, getting that elusive national title still remains the primary goal.