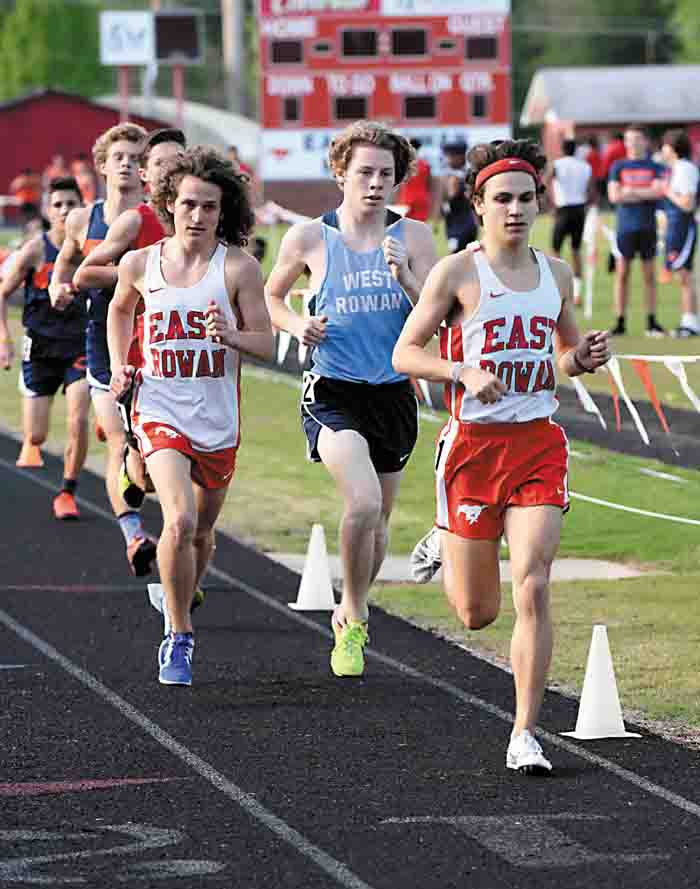 GRANITE QUARRY — Plan your work and work your plan.

“We always train as hard as we can to win this meet,” junior Jacob Downing said after host East captured six of its 18 events, totaled 166 team points and easily outscored runners-up Salisbury (105) and West Rowan (103).  “If we don’t win this meet, what’s all the work for? This is our passion. Yeah, it hurts sometimes, but it’s amazing to be a winner.”

“Sean didn’t get here by accident,” said fourth-year East coach John Fitz. “He trains hard all year, goes above and beyond the training regiment. If we can’t get out here, because of weather or whatever, he’ll find somewhere else to run.”

Incardona will be running for Lenoir-Rhyne’s cross-country and track teams in the coming months, but he’s already displaying an advanced runner’s maturity on the track.

“The biggest thing for me today was not so much time, but points for my team,” he said after edging West’s Thomas Waldo (4:49.13) in the 1600. “It goes back to the indoor track season, when I practiced intervals at this pace. Halfway through I knew I had the splits I wanted, so confidence was definitely a key. I just had to keep my mental toughness and keep my pace.”

“I wasn’t really surprised,” said Downing, who also placed in the 100 (third in x), the 200 (fifth in 23.77) and ran the second leg of East’s winning 4 x 400 relay. “You’ve got to strategize on the track. How much you stretch, how hard you go out, how much breath you take — those are all factors. You can always just go out there and run it, but if you strategize your times are going to be so much better.”

Fitz was certainly impressed. “He’s still got another year of this,” he said. “And he’s not even close to where he can be.”

“It feels phenomenal,” said Fitz, who carefully plotted East’s assault. “You always run track meets on paper before you run them for real. Last year, we were supposed to lose by 21 points to West Rowan and we won by 19. So somebody stepped up. This year, I had us winning by 20 or 22 — and we beat that.”

West’s Jalen Houston won the Sprinters MVP award after winning the 100 dash in 10.93 seconds and the 110 high hurdles in 15 seconds flat.

“I was worried about (Salisbury’s) Tyrone Johnson because he beat me in this race last year,” Houston said after nudging Johnson (11.43) in the 100. “I just wanted to get out and race fast, try to relax through the middle and finish hard to the line.”

His teammate, junior Jakari Gardner, penned the meet’s most uplifting story. A transfer from South Carolina, he won both the triple jump (43 feet, 1 1/2 inches) and long jump  (19-6) — and garnered the Field Events MVP award.

“I’m overwhelmed right now,” he said, flashing a 150-watt smile after outjumping East’s Sam Wall (42-8). “It’s only the second time I’ve ever done the triple jump. The first was last week. But I got a perfect start, put in my bounding like my coach taught me and knew where I had to be at every stage. It was just a perfect everything.”

West assistant coach Jan Dowling called Gardner “a natural,” and added: “He’s got God-given talent and great explosion. He feeds off of positive energy. If there’s a ball or running involved, you can bet he’ll be pretty good at it.”

Freshman teammate Christian Morgan was a surprise winner in the 300 hurdles, finishing in 42.76 seconds. “When I get on the track, I just let it all out,” he said. “I attacked every hurdle. When I heard footsteps behind me, it just motivated me to go faster.”

Carson senior Jacob Higgins disappointed himself but won the 800 in 2:01.24. “I was trying to break two minutes,” he said. “I’ve been trying to since I started running the 800 years ago.”

Higgins is headed to N.C. State in the fall to pursue an engineering degree. He collapsed after crossing the finish line, but credited friends Dylan Koontz, Nick Cox and Alex Wilson for inspiration. “If they weren’t here, I wouldn’t have had any motivation,” he said. “This was a PR, but next race I’ll break it.”

“My strategy was to hang with the seniority guys,” the freshman said after besting his PR by 36 seconds. “But on the straightaway before the fifth lap, I felt I should have been going faster. So I went outside and nobody came to chase me. I was running for third (place). I never expected to win this.”