Boston street name being changed over racist past 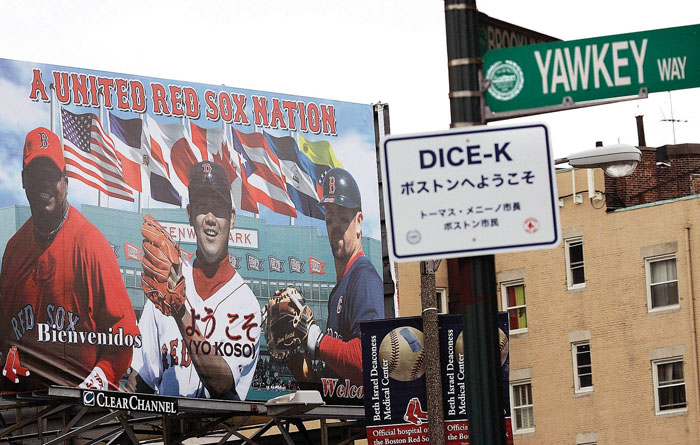 FILE - In this April 10, 2007 file photo, a Yawkey Way street sign hangs on a pole outside Fenway Park before a baseball game between the Boston Red Sox and Seattle Mariners in Boston. The City of Boston approved a plan Thursday, April 26, 2018, to change the name of Yawkey Way to Jersey Street, it's original name. The street had been named in honor of former Red Sox owner Tom Yawkey, who some have said was racist. (AP Photo/Chitose Suzuki, FIle)

BOSTON (AP) — Boston officials Thursday approved changing the name of Yawkey Way, the street outside Fenway Park, because of allegations former Red Sox owner Tom Yawkey was a racist who resisted signing black ballplayers in the 1940s and ‘50s.

The city’s Public Improvement Commission unanimously approved a proposal by current Red Sox ownership to call the stretch of road Jersey Street, which it was originally named before being changed in 1977 to honor Yawkey the year after he died.

“The spirit of Boston is being renewed,” said Walter Carrington, 87, a former member of the Massachusetts Commission Against Discrimination who investigated the Red Sox organization in 1959.

The vote drew immediate condemnation from the Yawkey Foundations, the charity named for Yawkey and his wife, Jean.

“As we have said throughout this process, the effort to expunge Tom Yawkey’s name has been based on a false narrative about his life and his historic 43-year ownership of the Red Sox,” the organization said.

“The drastic step of renaming the street, now officially sanctioned by the city of Boston (and contradicting the honor the city bestowed upon Tom Yawkey over 40 years ago), will unfortunately give lasting credence to that narrative and unfairly tarnish his name.”

The Red Sox filed a petition with the commission in February and said that restoring the Jersey Street name is intended to reinforce that Fenway Park is “inclusive and welcoming to all.”

Principal owner John Henry told the Boston Herald last year that “I am still haunted by what went on here a long time before we arrived.”

Under Yawkey, who owned the club from 1933-76, the Red Sox was the last team in the major leagues to cross the color barrier. Pumpsie Green became its first black player in 1959, 12 years after Jackie Robinson played for the Dodgers.

Prior to that, the team chose not to sign several prominent black players, including Robinson and Willie Mays.

The Yawkey Foundations acknowledged that in its statement, but said the good Yawkey and the foundation have done far outweighs the negative, including the more than $300 million the foundation has provided to organizations throughout the city.

The debate over Yawkey Way was part of the larger national debate over markers, memorials and statues that are now perceived as racist or incompatible with modern sensibilities. Dozens of monuments to the Confederacy have been removed in the past year.

The Public Improvement Commission noted that other businesses on the street had unanimously approved of the name change.

Democratic Mayor Marty Walsh did not say whether he agreed with the change, but noted that the change alone would not address the problem of racism.

“I know a lot of people are talking about ‘this is going to help us end racism,’?” Walsh said. “This is not the answer to that.”

It was not clear when the street signs would be changed.

The city renamed a stretch of the road David Ortiz Drive last summer in honor of the retired Red Sox designated hitter.