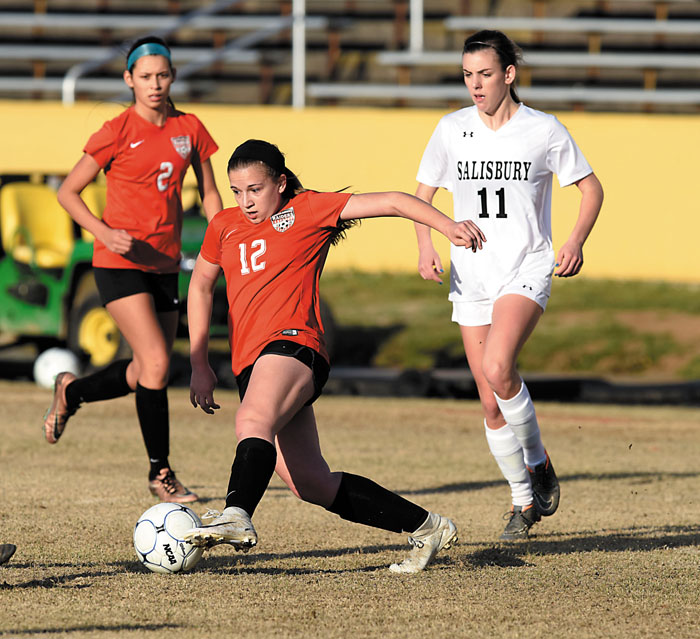 Wayne Hinshaw file photo/for the Salisbury Post ... South Rowan’s Katelyn Goodman (12) stops a pass for Salisbury’s Maria Capito (11), as the Raiders’ Leslie Sanchez (2) closes in, during their match in March. Goodman and Sanchez will play college soccer this fall.

South had posted a modest 7-11 overall record and had finished sixth in the South Piedmont Conference. The last thing on anyone’s mind was playoffs.

“That was my freshman year (2015),” Mauldin said. “Actually, we’d already packed the uniforms away. Our best senior, Leslie Franks, was going on vacation. Then the brackets came out, and we’re in the 3A playoffs.”

South was the No. 30 seed in the 3A West bracket and was headed to face No. 3 Weddington, one of the strongest teams in the state. That playoff game was a blur. It was over quickly via the mercy rule. It was 9-0 at halftime and time for the Raiders to head back home.

“Looking back, at least we can say we were in the playoffs,” Mauldin said  with a smile.

A lot has changed at South since 2015. Kyle Neal became South’s coach prior to the 2016 season. His first year, the Raiders took their lumps again in the SPC from programs such as Cox Mill and Hickory Ridge, but even as South struggled to a 5-15-3 overall mark and staggered home seventh in the SPC, there was a big-picture, long-range plan in place.

“Our team was mostly sophomores that year,” Neal said. “That was a really tough league and we didn’t win a lot, but we learned a lot.”

Nine of the sophomores from that 2016  team — Mauldin, Katelyn Goodman, Leslie Sanchez, Elisa Sanchez, goalkeeper Michelle Rivera, Holiday Harvey, Karigan Ford, Mary Jester and Raquel Landaverde — are key seniors for the Raiders two years later, so it shouldn’t be a shock that South has made serious strides.

“It really has been a story of growth for all of us,” Leslie Sanchez added. “We weren’t very good when we were sophomores, but now we are a good team.”

South’s 2016 squad scored 24 goals the entire season — basically one per game — with Mauldin getting seven and Goodman five. Mauldin made all-region and Mauldin and Goodman made all-county.

South’s 2017 team made a leap forward to 11-9-1. South scored 64 goals, with explosive freshman Madison Henry getting 28. Goodman and Mauldin are team players and they made a successful transition from being finishers to getting Henry the ball. Goodman had 14 assists, while Mauldin had eight. Goodman and Mauldin repeated on all-county and were joined by Rivera, Henry (who made all-region) and forward Rhiannon Kimmer.

And this time when South qualified for the 3A playoffs, the Raiders weren’t just happy to be there. As the 20th seed, South lost at No.10 Asheville, in the first round, 5-2.

“We were competitive with a really good program,” Neal said. “It was a step.”

A lot of positive things have happened for South and its huge senior class so far in 2018. South is 13-5 overall and is tied for second in its debut season in the 2A Central Carolina Conference with an 11-3 record. Henry, still only a sophomore, leads the state with 48 goals.  Mauldin has enjoyed a banner season with 10 goals and 17 assists. Goodman owns nine assists.

“We’re in a new league,”Goodman said. “And a lot of the teams we played didn’t know about Madison. At least, they didn’t know the first time we played them.”

Mauldin, Goodman and Leslie Sanchez all will have a chance to continue to compete in college soccer in the Division III ranks.

All three made their college choices based primarily on academics and career goals, but they also have impressed college coaches enough that they’ll also have spots on soccer teams next fall.

Mauldin, a vocal leader, a team captain for three years, a State Games performer in 2016, and an attacking midfielder,  is heading to Emory & Henry in Virginia. She chose Emory & Henry because of its stellar economics program.

Goodman, a defensive-minded midfielder who gets assists off her direct kicks and corner kicks, is headed to Piedmont International in Winston-Salem with her sights set on a business degree. Piedmont International is combining next year with High Point’s John Wesley University, a move that will make two small schools a medium-sized school.

“Goodman has been huge for us this year with her kicks,” Neal said. “We’ve gotten a lot of goals on set pieces off corners, and she’s made long kicks that Madison has been able to run on to. We just tell her to kick it to the scoreboard.”

Leslie Sanchez, one of South’s back four, has come back from a broken foot she suffered last season. She chose Pfeiffer University because of its proximity and because of its strong nursing program.

“They’re all great students, great girls and very good soccer players,” Neal said. “I give them a lot of credit for reaching out and making contact with the soccer programs at those schools, and they’ll all have a chance to make a difference for those programs.”

The Central Carolina Conference is a massive, 10-team league. Undefeated Salisbury and West Davidson, which has beaten South Rowan twice, are the perennial powers in the league, but the Raiders have won a lot of tough games against Lexington and league newcomers Central Davidson, North Davidson and Ledford.

“It’s been a real challenge,” Neal said. “Our first game of the season was a conference game, and we just jumped right into it. This is a good league, with seven teams that I would say are very competitive. If you want to play a non-conference game, there’s room for a few, but that’s going to make it a three-game week, and we’re not the deepest team. Our midfielders rarely get a break.”

South Rowan has come far enough that South players have been spotting opponents in the crowd, watching their games. That’s been cool. It’s a sign of respect. No one takes the Raiders for granted anymore.

When the playoffs come around on May 9, South should get a decent seed and should have a fighting chance to beat someone in the first round. It’s what the Raiders have been working for, for three years.

“For all of us, soccer has been a great experience,” Goodman said. “I’m very proud of what we’ve accomplished and how much we’ve grown together the last three years.”

South had a six-match winning streak early in the season and won five straight in the middle. There have been health and fatigue concerns lately, but Neal is confident this team can leave lasting memories. South has four regular season games left, including a Senior Night game with Salisbury.