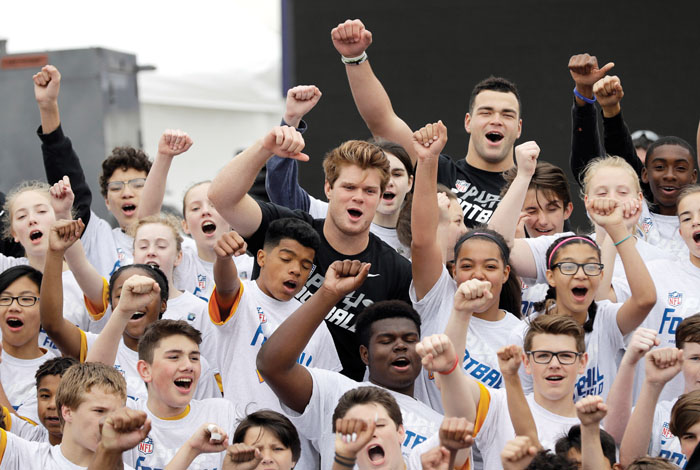 ARLINGTON, Texas (AP) — Anyone who thinks the draft pundits and even some team general managers have no clue what will happen in Thursday’s opening round of the draft should talk to the guys likely to get selected early.

You won’t get much clarity. You will get the same shrugs, the same “it’s not in my control” replies.

And you can get some perspective, too.

“It’s not where or when you get drafted,” said Wyoming’s Josh Allen, one of four quarterbacks expected to be chosen in the top half-dozen or so spots. “It’s what you do after it. I can see myself in seven different uniforms; I had seven visits.”

Said UCLA’s Josh Rosen: “My game is not where or when I go, it’s to go to the right team. If you don’t think I’m right for your team, don’t draft me. I want to go somewhere I think I’ll do well, and if that team feels I will do well, pick me.”

That team could be Cleveland at the very top. It could be the New York clubs, the Giants at No. 2 and the Jets at No. 3. Maybe Denver at No. 5, or a team desperate to get in the QB derby that trades its way up.

There is more mystery to this draft than most, and the prospects recognize it. After they tossed footballs Wednesday with youngsters and participated in some modified drills with the kids as part of the NFL’s Play Football Clinic, many of the players projected as top 10 picks assessed what might happen at AT&T Stadium.

Well, they actually mostly laughed and joked about having no clue what will occur.

“There’s a lot of uncertainty going into tomorrow,” said Southern California’s Sam Darnold, another of the quarter of highly coveted passers. “So you have to be prepared for whatever happens. I’m looking to see who was right and who was wrong (among so-called draft experts). That’s fun.”

The fun begins at 8 p.m. Eastern with the Browns, coming off a spotless season — as in zero victories — having the first and fourth choices. Not picking Allen, Rosen, Darnold or Oklahoma’s Baker Mayfield to start things off would be a huge shock.

Both teams that call New Jersey home come next. The Giants have a franchise quarterback in Eli Manning, but he’s 37. Do they go for a young arm, or look at the players deemed the best overall talents on each side of the ball? That would be Penn State running back Saquon Barkley and North Carolina State defensive end Bradley Chubb.

“I try to keep a level head and not think about it,” said Chubb, who then admitted it would be “huge” if he went fourth to Cleveland and was paired up front with last year’s top overall pick, Myles Garrett. “People think this will happen and that will happen and nobody knows what will happen.”

Perhaps. But it’s a pretty safe bet the Jets will go for a QB after trading up from sixth overall to get Indianapolis’ No. 3 spot.

“It’s all about opportunity,” GM Mike Maccagnan said. “We felt good about where we were originally picking and then we made the trade and moved ourselves to position ourselves, in our mind, to be in a position to have a good option and a good choice with that spot.”

Denver is up fifth and recently signed free agent Case Keenum, whose best pro season helped Minnesota make the NFC title game. Having Keenum aboard doesn’t rule out GM John Elway — the first pick in the renowned 1983 draft that had six first-round QBs, three making the Hall of Fame — going for a signal caller.

“We’ve stacked them, got them in order, how we think they fit, who fits us and who doesn’t,” Elway said of the current quarterback crop. “We’ve been through that process. We do that process with every position. Where they fit into our football and are they a fit for us. Even as we stack the board, we stack them talent-wise, but also if they are a fit for us.”

How it all fits together makes for an intriguing spectacle, has sparked a cottage industry and has become a traveling road show.

So how will it all get going Thursday night?

“I haven’t paid attention to a lot of drafts,” Rosen said. “It just seems nobody knows what’s going on.”

PHILADELPHIA (AP) — Eighteen starters in the last Super Bowl were selected in the fourth round or lower, including six players who didn’t get a call until the NFL draft was over.

While first-round picks receive most of the attention and players chosen the first two days of the draft get more money and better job security, success on Day 3 of the draft often separates the elite teams from the good ones.

The Eagles enter this week with only six picks in the draft and none on Day 2 so there’s a bigger emphasis for them to hit on some of their picks in the later rounds and find quality rookies in free agency.

It won’t be easy, however.

“You would think because we’re coming off a Super Bowl and we don’t have a second- or third-round pick that it would be a lot easier after the draft,” said Joe Douglas, the team’s executive vice president of player personnel. “But my experience coming off a Super Bowl, it’s sometimes harder to get guys to commit to your roster because agents and players have a perceived notion that it’s going to be that much tougher to make your team. It’s going to be a challenge for us, and we know it, and we’re going to attack it, and I think our guys are going to do a great job recruiting some of these guys who slip through the cracks like we did last year. But it is going to be a challenge because there’s going to be some guys who think there’s a tougher shot of making the team.”

One way to combat that is to offer more guaranteed money to undrafted rookies. It helped the Eagles snag Clement last year after he ran for 1,375 yards his senior season at Wisconsin.

The Jaguars, who lost the AFC championship game, got Pro Bowl linebacker Telvin Smith (fifth round, 2014) on Day 3 of the draft. They also relied on two rookie receivers late in the season: fourth-round pick Dede Westbrook and undrafted Keelan Cole.

“You’re looking for those types of nuggets,” said Tom Coughlin, Jacksonville’s top executive. “You’re talking about value. That’s what this is all about, so when you get a player in that circumstance and you’ve done the research on the guy, you know the guy solid and it happens to be that he’s there for you, then obviously you feel very good about that.”

Titans general manager Jon Robinson said his scouting department has focused the past couple of weeks on finding value in the late rounds and after the draft.

“Anytime you can get return on those guys in those later rounds with play on the field whether it be offensively, defensively, in the kicking game, I think that’s good,” Robinson said. “I think we’ve done a pretty good job the last couple years of finding some guys to carve out a niche, carve out a role on this football team and contribute. So we’re hoping we can kind of sift through those guys over the weekend and come away with a couple that can help us.”

Accumulating more picks, especially in the later rounds, certainly helps a team’s chances of adding a solid contributor. Minnesota, which lost the NFC title game, has eight draft picks, including five on Day 3.

“Sure, you’re going to have your misses. But, the more swings that you get at the plate, the better odds you have of hitting the ball,” said Vikings general manager Rick Spielman. “If you only get to bat twice, you’ve got maybe a 50-50 chance. If you get to bat 10 times, hopefully your 50-50 chance, your odds have increased pretty good. I think it’s taking as many swings as you can down in those later rounds.”

“When you can hit at that part of the draft, and/or free agency, it’s a really good thing,” Lynch said. “Shoot, we picked guys off of tryout camp last year. … Everyone focuses on the work up top with No. 9 but we really try to take a holistic look at this thing and pride ourselves on being real strong on the back end of the draft.”

METAIRIE, La. (AP) — New Orleans Saints general manager Mickey Loomis says the Saints plan to have an empty chair in the draft room at team headquarters in honor of their late owner.

His wife, Gayle, now controls both the Saints and the NBA’s New Orleans Pelicans, which Benson bought in 2012.

Loomis says Benson would have been excited about his sports businesses. Benson’s horse, Lone Sailor, is slated to run in the Kentucky Derby and the Pelicans are in the second round of the playoffs after sweeping Portland in the first round.

Loomis says the Saints miss Benson and will be thinking about him on draft night.