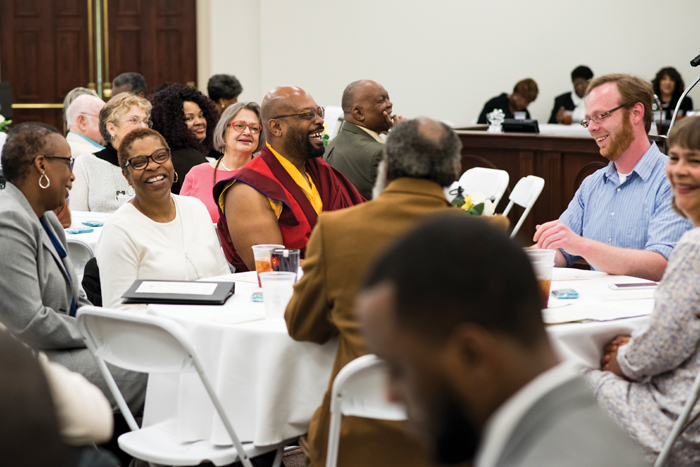 People laugh during at the Mayors Spirit Luncheon at City Hall on Wednesday. Rebecca Benson/Salisbury Post

SALISBURY — Mayor Al Heggins said the purpose of the Mayor’s Spirit Luncheon is to “provide an opportunity for our rich and diverse spiritual and religious practitioners and leaders to come together with local government.”

“It gives us all a chance to kind of check in with one another,” Heggins said from the podium Wednesday. “And to get the chance to meet those that we don’t have a chance to sit down and talk with and break bread with on a regular basis.”

Heggins said many people are guilty of “staying within” their own denomination or faith group.

“But we live in a very diverse city,” Heggins said. “So here is an opportunity to continue to break bread with other faith groups and other practitioners and beliefs.”

The theme of this year’s Mayor’s Spirit Luncheon was “Faith in Action: Speaking Truth to Power.”

Heggins said speaking truth to power “can show up in ways and at times you may never imagine.”

The main speaker was the Rev. Regina Dancy, CFO of Hood Theological Seminary and a leader of Women for Community Justice.

“What we have seen and witnessed here today is that, regardless of our spiritual and/or nonspiritual practices, I am confident that there is an element of instruction in each of one of us that encourages us to adhere to the Golden Rule: ‘Do unto others as you would have them do unto you,’” Dancy said.

She hopes the city can recognize the strength in its diversity.

“We will work together to make Salisbury, the state of North Carolina and America truly united in every sense of the word,” Dancy said.

Dancy talked about her work with the Poor People’s Campaign, which was originally proposed by the Rev. Martin Luther King Jr. just before he was assassinated in 1968. The idea has been taken up anew in recent months by the Revs. William J. Barber II and Liz Theoharis.

“We must begin to ask, why are there 40 million poor people in the nation overflowing with such unbelievable affluence?” Dancy said. “Why have we substituted the arrogant undertaking of policing the whole world for the high task of putting our own house in order?”

Dancy said these questions and others were brought up by King 50 years ago.

“And yet they are still very relevant today,” Dancy said.

The luncheon featured prayers and reflections from nine other people, including Bushi Damashii, who gave a Buddhist prayer; the Rev. Debra Ellison, who gave a Christian prayer; and the Rev. Fleming Otey, who gave a Native American prayer.

Each prayer was oriented around the idea of community and affirming the lives of others.

Betty Jo Hardy, a longtime member of Covenant Community Connection, said her heart was “overflowing” listening to the speakers at the luncheon.

“I often pose the question, ‘Are we able to create a culture of peace?’” Hardy said. “And you might say it’s impossible, but no.”

Hardy said a culture of peace can be created if individuals “practice justice with peace.”

“And today we are practicing,” Hardy said.