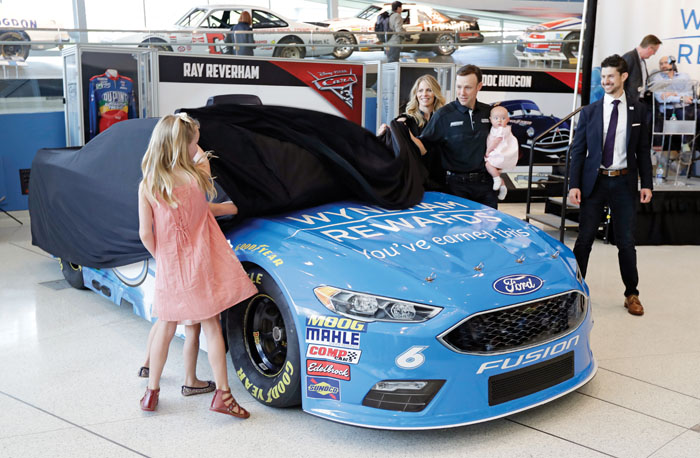 NASCAR driver Matt Kenseth, center, gets helps from his family as they unveil the car he will drive this season during a news conference in Charlotte, N.C., Wednesday, April 25, 2018. Kenseth will return to NASCAR this season in a reunion with Roush Fenway Racing, the team that gave him his Cup start in 1998. Kenseth will split the No. 6 Ford with Trevor Bayne, who has been the full-time driver of that car since 2015. (AP Photo/Chuck Burton)

CHARLOTTE (AP) — Roush Fenway Racing wants to be among NASCAR’s elite again and recognized it needed help for its ongoing rebuild.

The organization called on Matt Kenseth, one of its cornerstone former drivers, and asked him to come back.  When Kenseth took the call from team owner Jack Roush, he had just one question: What took the team owner so long to reach out?

“What took so long is there was a rawness from him leaving me,” Roush said Wednesday at the NASCAR Hall of Fame.

Kenseth launched his Cup career with Roush in 1998 and he won a Cup championship and two Daytona 500s driving for the once-storied team. But he moved in 2013 to Joe Gibbs Racing, where he won 15 of his 39 career Cup victories, and it took Roush some time to get over the betrayal.

In the time Kenseth was gone, Carl Edwards also moved to Gibbs and a stumbling sponsorship problem in NASCAR forced Roush to gradually downsize from five cars to the two Cup entries he’s fielding this year. Ricky Stenhouse Jr. won two races last year and made NASCAR’s playoffs, but the organization has struggled to build consistency and get Stenhouse and former Daytona 500 winner Trevor Bayne running equally.

“We see a potential for Matt being involved with the company and race team past his driving,” Roush said. “We certainly feel like he’s come home to us.  He’s a significant part of the history and legacy. It’s a chance to look at our cars and find out if there’s something glaring that Matt will see from his experience.”

Kenseth will split the No. 6 Ford with Bayne, with Kenseth’s first race coming next month at Kansas Speedway. Kenseth will also enter the All-Star race at Charlotte Motor Speedway, and the rest of his schedule is still being determined. Wyndham Hotels & Resorts joined the organization Wednesday and will likely be on the car when Kenseth drives.

Bayne, who has personal sponsorship from AdvoCare, was not thrilled with the split time.

“We wouldn’t want it any other way.  If we had a driver who just kind of acquiesced, that would be an inherent problem in itself.”

Bayne won the 2011 Daytona 500 in just his second career start. He has 16 top-10 finishes in 175 career Cup starts. He’s currently 26th in the Cup standings through nine races, and his highest finish this year was 12th at Texas. Bayne’s deal with Roush and AdvoCare, which is signed on for 15 races this season, runs through 2019.

Kenseth was available to return to his one-time home because he lost his ride last season when Gibbs had to let a veteran go to make room for Erik Jones amid a wave of younger NASCAR drivers hitting the circuit. He turned 46 in March but is still considered among the top talents in the Cup garage, but his salary made him too expensive for any of the open rides.

It put him on the sidelines for the start of this season, and after watching nine races on television and attending his daughters’ gymnastics meets, Kenseth felt the opportunity to return to Roush was the right move. He was brought to the organization in the late 1990s by Hall of Famer Mark Martin, who flew to Charlotte on Wednesday morning to be present when Kenseth was named a part-time driver of Martin’s famed No. 6.

“There wasn’t a crew chief that made Matt fast and made Matt win. He knew race cars,” Martin said. “He’s enough old school to be able to bring that to the table and yet enough new school to be able to adapt. I don’t know that I can describe to you what it means to me to look at that car and knowing that my favorite driver of all-time … is going to be working hard to improve the performance of Roush Racing.  I have a lot sweat equity and pride in this organization.”

Kenseth said if he simply wanted to race, he would have taken a deal to be in the season-opening Daytona 500.

“It feels like the right deal at the right time. It’s with Jack. It’s an interesting challenge for me and not just being a driver, I hope I can be much more to the organization and I’m hoping that there are a lot of different ways I can help,” he said.

Although Roush exaggerated how long he was upset by Kenseth’s departure, the team owner felt the duo had at least another championship to win together. Perhaps it can happen in this reunion, with Kenseth helping the organization move back to the top of the standings.

Stenhouse’s two victories last year were at Daytona and Talladega, and Roush Fenway has not won a non-restrictor-plate race since 2014.

“Jack has told me many, many times that Matt is the best at figuring out how to assess and diagnose cars,” Newmark said. “We had made improvements and for us to take the next step and it would be beneficial to bring Matt back into the fold. We do hope it jump-starts Trevor and he benefits from this, because our hope is he would have a long career ahead of him.”