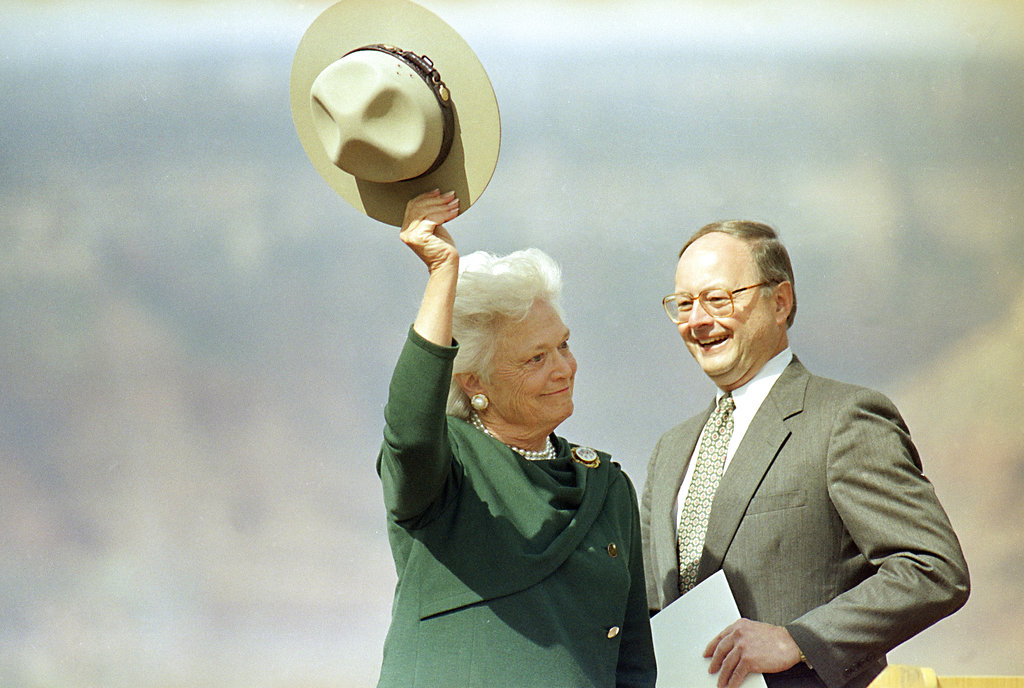 As first lady, Barbara Bush championed literacy, the “cause” for which she is best known. Her true cause, however, was the I-am-what-I-am attitude that quietly cleared a path for how women of a certain age in the public sphere could thrive on their own terms.

The moving tributes in the aftermath of her death aside, she once was seen as a campaign liability: She was too old-fashioned, too frumpy, too blunt and, perhaps most egregious of all, too old. Sixty-three when her husband became president, she remains the oldest woman ever to have assumed the role of first lady.

In 1988, I was covering the presidential campaign and writing a book called “Running Mates.” The book asked: What does it take to be a first lady? The role seemed anachronistic, even back then. I met with Bush several times over the course of the race; she invited me for a sit-down chat in the comfort of the family home in Kennebunkport, Maine, and later, as first lady, at the White House. Politics in this country is a family business, but being first lady is not for the faint of heart, as Melania Trump is learning.

It wasn’t easy for Barbara Bush, either — especially in 1988. That year, a new breed of political spouse emerged. Wives of the Democratic presidential contenders duked it out at a first-ever “first ladies forum” during the Iowa caucuses. Stylish, professional women, several of them lawyers like Elizabeth Dole — the wife of the Republican candidate Bob Dole — tried to redefine the role while avoiding missteps on the campaign trail.

A matron pitted against younger rivals, Barbara Bush had a special challenge: how to create a persona that fit with the times.

Initially, she was ambivalent about heading to the White House. During the campaign, news accounts described aides to her husband, George H.W. Bush, as privately saying that they would have preferred a more glamorous wife. They urged her to dye her shock of snowy white hair — her most striking feature.

“They’re laying an enormous load on me, if you want to know the truth,” she said then.

Her poll numbers were low. She stung herself with an remark about Geraldine Ferraro, who had been Walter Mondale’s running mate in 1984 and the first female vice presidential nominee. Bush had once called Ferraro the ��four-million dollar — I can’t say it but it rhymes with rich.”

Newspapers called Bush a dinosaur. “Should Barbara Bush get with it?” the Chicago Tribune asked, adding that she “looks a tad too frumpy — even for Washington.” That was part of the headline for a photo spread that pictured Bush’s face atop the bodies of Cher, Cybill Shepherd and Tina Turner. Ouch.

Bush fought back with humor. Reporters noticed that she’d get a laugh by feigning a story of how voters approached her after her husband’s events to say, “ ‘I enjoyed your son’s speech!’ ” But she was not immune to the slights. “She’s lucky I didn’t burst into sobbing tears,” Bush told The New York Times after a talk show host had asked, “Your husband is a man of the ’80s and you’re a woman of the ’40s. What do you say to that?”

She did make herself known. Like many political spouses, Bush kept her political opinions out of the public sphere, but behind the scenes, she displayed a steely determination. Her opinions carried weight, especially when it came to staff and campaign organization. After the election, her son George W. Bush recalled that when he worked as an operative on the campaign, “My mother was viewed as a very smart, intelligent, savvy person.”

Bush more recently let down her guard, allowing: “I don’t know how women could vote” for Donald Trump.

Hillary Clinton’s loss hit some women hard — especially those who’d broken gender barriers themselves only to hit a glass ceiling. Many sought from her validation that “a woman of a certain age” could continue to be a force.

“I just wanted to see an ‘old bag’ rule,” a friend confided to me on election night. Like Bush, many of those women are “old bags” now. There’s a lot of white hair beneath the dye jobs.

Back in 1988, Bush described herself as “a late bloomer.” Indeed, she came into her own and stepped forward at a time when many people, men and women, start to step back. She beat back her critics, wouldn’t let others push her around, and gained power over time. She showed that if “old bags” in the United States did not yet rule, they would not be counted out.

Ann Grimes, a former editor at The Washington Post, teaches at Stanford University and co-directs the Brown Institute for Media Innovation.

Letter: Alcohol is worse than tobacco