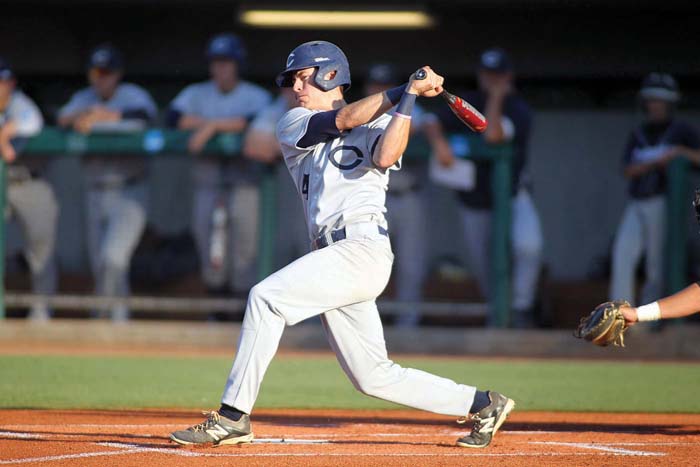 WILLIS GLASGOW FILE PHOTO/WGSPORTSPHOTOS.COM ... Catawba’s Luke Setzer (4), shown in the NCAA Division II Baseball Championship in Cary, in 2015. That was Setzer’s freshman year and now a senior. Setzer is hoping to end his amazing collegiate career on another high note.

“I’m taking 18 hours this semester, so I can finish in four years,” Setzer said. “I believe I’ve written 350 papers as a college student and I’ve got 11 due this week. And, oh, yeah, we’re also playing the conference tournament this weekend in Tennessee. But I’ll find a way to get it done.”

There’s no doubt that Setzer, one of the more conscientious 22-year-olds on the planet, will handle the classroom challenges and graduate on time. His major is administration of justice. His career goal is to become an agent for the FBI or SBI once his playing days are behind him.

On the baseball side of things, South Atlantic Conference regular season champion Catawba headed for the tournament in Kodak, Tenn, this morning with more pressure than usual. Catawba hasn’t won the SAC tournament since 2014, and if the Indians can’t win it this time they won’t make the regional. The last three years Catawba has been ousted from the tournament by Wingate, Tusculum or Carson-Newman but has still advanced to regional play because of an outstanding overall record. But this time, the Indians who got off to a brutal start, stand a modest 27-21. They are an ugly 8-13 in non-conference games.

The team batting average is .320, but the team ERA is 6.46. Both of those numbers are inflated by cozy Newman Park, where dead center field is 360 feet from home plate.

Homers are going to be tougher to launch at Smokies Stadium where it’s 400 feet to center, so pitching and defense should decide the SAC tournament. Catawba got strong hurling Saturday from lefties Michael Elwell, Connor Johnson and Hunter Shepherd and pulled out its sixth straight SAC regular season title at Wingate.

“I love this team,” Setzer said. “Our pitchers came through when we needed them against a really good-hitting team. We kept fighting as a team and we got a little bit of luck. We haven’t had a lot of luck this year.”

Lightly recruited coming out of East Rowan High — he signed very late with Catawba and Belmont Abbey was the only other interested school — Setzer has turned in a stunning career as a four-year starter in the Catawba outfield. He’s hit for the cycle. He’s smacked a grand slam. He’s produced a 24-game hitting streak. On Catawba’s all-time list, he’s third in runs scored, fourth in hits and tied for fourth with another East Rowan grad, David Trexler, with 45 homers. He’s tied for seventh in RBIs with Ryan Query and is in the all-time top 10 in doubles and triples.

As a junior, Setzer was incredible, batting .415 with 102 hits, including 18 homers. He was a first team All-American, the SAC Player of the Year and the SAC Male Athlete of the Year.

“Luke is a blue-collar guy, but he has a lot of ability and what he did last year was no fluke,” Catawba head coach Jim Gantt said. “He works his tail off and everything he got he deserved.”

It’s been harder as a senior. Every opponent is well aware of  Setzer. Everyone pitches around him or pitches him tough. Lots of  curveballs and sliders. Even in non-conference games, teams pitched to Setzer like it was the World Series. His batting average has dipped from .415 to .305, although the rest of his offensive numbers are solid. He still has 16 doubles, 14 homers, 51 RBIs and 55 runs scored. He was still first team All-SAC while winning a Gold Glove for his defense.

“It’s been a lot harder as a senior,” Setzer said. “I found that out right away in our games in Florida at the start of the season. Teams weren’t going to let me be that guy that beat them. I’ve battled myself a lot this year.  Baseball is a hard game and it can knock you down, but I’ve always gotten back up. I’ve tried to be a guy who just does his job and gets on base. I took three big walks in that Wingate series and didn’t try to do too much. And those young guys behind me (Jackson Raper, Joe Butts, Jacob Nester), they came through for us. You have to pitch to somebody in our lineup.”

Gantt understands the battle Setzer has been fighting as Catawba’s feared cleanup hitter. He watched Will Albertson go through exactly the same thing as a senior after his monstrous, mind-blowing junior year. Sometimes you have to maintain plate discipline, take the 3-and-1 breaking balls off the corner and trust the next guy.

“Luke is that ultimate team guy,” Gantt said. “Believe me he wants to get the big hit. Not for any selfish reasons, but because he wants to do it for the team. His batting average may be down some, but he’s been as important as anyone in our lineup. Those guys in front of him (Kyle Smith, SAC Player of the Year Chance Bowden, Heath Mitchem) and those guys behind him have benefited from the tremendous season that Luke had last year. Luke’s presence has created opportunities for everyone around him to have a great year.”

In early March after Catawba had lost two out of three to Lenoir-Rhyne at Newman Park, scoring only eight runs in the series, Gantt gathered senior mashers Setzer, Bowden and Smith for a chat. Setzer hadn’t  driven in a run in that series.

“That was a heart-to-heart with Coach,” Setzer said. “He sat us down and told us we’d been riding on the coat-tails of great players for a lot of years, but now it was our turn, it was our team, and we just weren’t getting it done. Since that talk I’ve been really focused on trying to be a leader for our young guys. Chance has had an amazing season, and we were able to win the league again.”

There’s a chance that Setzer’s law enforcement career will be put on hold by the MLB draft. The scouts still come around  to check on him. They understand he’s had fewer chances to do damage with the bat this season, but he’s strong and tough for a 6-foot, 180-pounder. He runs well and throws well.

But for now there’s Setzer’s final conference tournament to think about. The Indians haven’t won  the event during his career, not even in 2015 when they went to the World Series when he was a freshman.

And this time they have to win it.

“We want to win it because we want to keep playing,” Setzer said. “We want this to be a special season.”

Setzer’s legacy as one of Catawba’s all-time greats is secure. And the Indians will have another Setzer to replace him next season. Hayden Setzer, a 6-foot-3, 190-pound lefty from East Rowan, has signed with Catawba.  Luke couldn’t be more excited.

“There’s a winning culture here that Coach Gantt has built, there’s an Indian Way,” Luke said. “I’m proud Hayden will get to be part of that.”