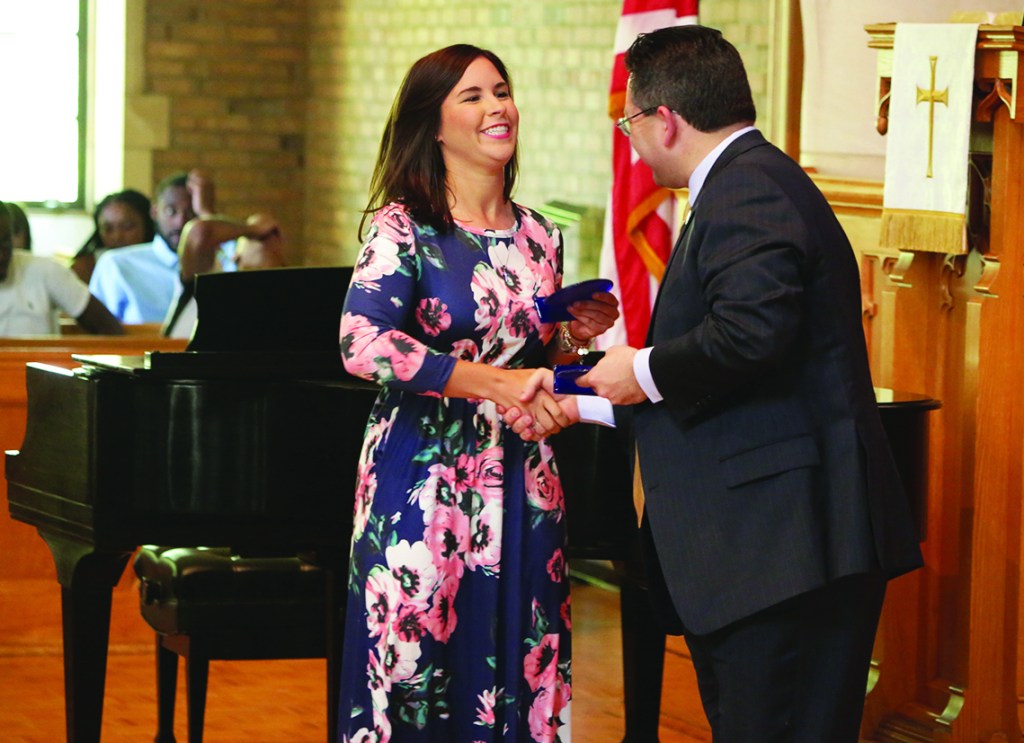 The outgoing Student Government Association (SGA) president, Gavin Wooten of Lexington was presented with a gavel, awarded to the retiring president at the end of the academic year. Wooten served as SGA president during ’17-’18 academic year. Other outgoing SGA Executive officers thanked for their service included Vice President Payton Coleman of Charlotte, Treasurer Molly Sue Harmon of Mint Hill, and Secretary Adna Music of Salisbury.

SGA officers who will serve during the 2018-2019 academic year were recognized, including President Payton Coleman of Charlotte and Secretary Adna Music of Salisbury. As one of her first acts as the incoming SGA President, Coleman assisted with the award presentations made during the convocation.

Service to the Community & Leadership Awards

Madalyn Liefert of Concord was the recipient of the Sara Cook Award for Student Involvement. This award was established by Student Affairs in recognition of the work of Board of Trustee Member Sara Cook and her role in alcohol education, policy and programs that have changed the campus culture of student life at Catawba.

Kiersten Nichols of Mocksville, the editor of “The Pioneer” student newspaper, received the Pioneer Award, for her hard work and leadership on the staff of this publication.

Two students, Kala Byrd of North Wilkesboro and Chelsea Hatfield of Salisbury shared the Frances Decker Wentz Award. The award is presented annually to an upper class student(s) who has demonstrated a real concern and aptitude for theory and practice of library science and service.

Dr. Phillip Burgess, associate chair of the Music Department and director of vocal-choral activities, was the recipient of the Kenneth Clapp Tri-Delta Award. Established by the Class of 2000 in recognition of the work of Dr. Ken Clapp, college senior vice president and chaplain, it is presented annually to a member of the faculty or staff who demonstrates dedication, devotion, and dependability.

The President’s Award for Community Service was presented to senior Victoria Layton of Concord. The award is given annually to a member of the campus community who has distinguished him or herself in significant service to the local Rowan-Salisbury community.

Austin Humphries of Advance was a co-recipient of the Sherrill & Smith Award in Business Administration. This award is given annually by the partners of Sherrill & Smith to the senior in the Ralph W. Ketner School of Business who achieves the best scholastic average during the year.

The Millard F. Wilson Award for Excellence in Business was one of two students presented to Chase Loudin of Salisbury.

Heather Duncan of Salisbury was a recipient of the Rebecca H. Frantz Essay Prize this year.

Heather Duncan of Salisbury was recipient of the Bethany and Aidan Sinnott Poetry Award.

Courtland Hunter of Concord was awarded the Martha H. Morehead Award for the outstanding single work – poem, short story, or graphic contribution to The Arrowhead during the year with the selection made by the English Department.

Samuel Austin Collins of Mooresville was a co-recipient of the Rice, Andrews, Young Award. It is given in honor of the former chairpersons of the Catawba Department of Modern Foreign Languages to the foreign language major(s) or minor(s) who has made the highest grades in his/her foreign language studies.

The recipient of the Mathematics Award was Kerry Aitken of Spencer. This award is presented annually by the mathematics department faculty to a student(s) who has demonstrated outstanding ability, scholarship and interest in the field of mathematics.

Alicia Olvey of Thomasville was a recipient of the Shirley L. Haworth Prospective Teacher Award. It is presented to a senior(s) with a 3.0 grade point average or better who majors or minors in education and who has demonstrated outstanding potential as a teacher based on observation in classroom setting by faculty and cooperating teachers.

Lauren Isenhour of Salisbury received the Student Education Association/Cynthia Osterhus Award. It is given to the student who has made an outstanding contribution to the student education association and who has shown potential to become an excellent teacher.

Elizabeth George of Salisbury received the Daniel E. Kirk Biology Award. It is presented to a senior(s) who has exhibited outstanding service and achievement in the Department of Biology.

Awards of Special Merit and Achievement

The Algernon Sydney Sullivan Award was given to Ethan Chirico of Salisbury and Mrs. Rose Ann Pannell, administrative assistant in the Music Department.  It is given in recognition of fine spiritual qualities practically applied to daily living and with the belief that these persons will uphold the spiritual standards of Catawba by their noble characteristics.

Catawba’s 2016-2017 Staff Member of the Year Award went to Sharon Newsome, administrative assistant to the Dean of Students. This award is presented annually and selection is made by a popular vote of the students.

Leslie Dent, a preceptor in the Athletic Training Education program, was honored as the recipient of the Louise Tucker Staff Council Award. The award is given to a staff member who demonstrates outstanding work ethic and performance in their area, with nominations made by members of the faculty and staff and the recipient selected by a vote of the Staff Council.

The President’s Award for Staff Excellence was presented to Ralph Michael, a Public Safety Officer. The award is given annually to a member of the college staff who has distinguished him or herself in achieving excellence in job performance and who has contributed to strengthening of community spirit on campus.

Dr. Buster Smith, chair and associate professor of sociology, was the recipient of the Swink Prize for Outstanding Classroom Teacher.

Dr. Steve Coggin, a professor of biology and director of the Center for International Studies on campus, was the recipient of the Trustee Award for Outstanding Contribution to the College. The award is given annually to the person or persons judged to have made an outstanding contribution to the institution.

The recipients of the Whitener Medals were announced at the awards convocation but will actually receive their awards during Catawba’s May 13 graduation exercise. They are Kristen Rocko of Johns Creek, Ga., and Alex Turner of Taylorsville. These awards are presented annually to the man and woman in the graduating class who combine in themselves, in the highest degree, the equalities of character, leadership and scholarship.