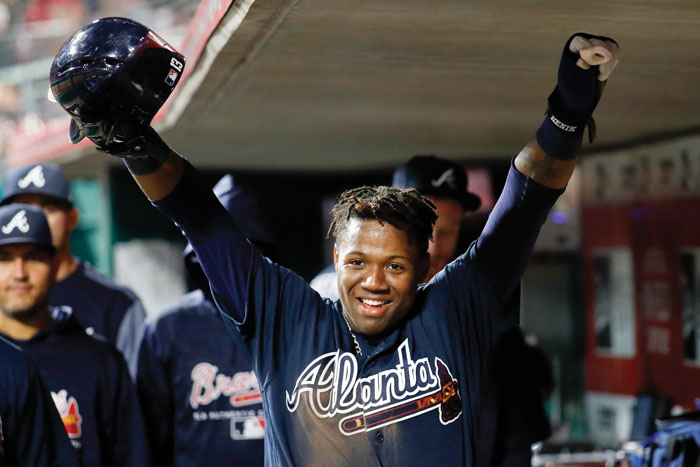 AP Photo/John Minchillo ... Atlanta Braves’ Ronald Acuna Jr. celebrates in the dugout after scoring in the eighth inning of Wednesday night’s baseball game against the Reds, in Cincinnati. The 20-year-old Acuna had just gotten his first career hit before scoring. The Braves won, 5-4.

The 20-year-old Acuna singled and scored the tying run in the eighth inning of his big league debut, and the Atlanta Braves went on to beat the Cincinnati Reds 5-4 Wednesday night.

Acuna became the youngest player in the majors when he was called up from Triple-A before the game. He went 1 for 5 and played left field.

“As soon as I hit the field, I felt at home,” Acuna said through a translator. “I felt comfortable.”

Atlanta manager Brian Snitker saw no signs of nerves from his prodigy.

“I thought he was really good,” Snitker said. “Nothing affected him. He wasn’t overwhelmed. He went out and played his game.”

Ozzie Albies, the second-youngest player in the bigs at 21, homered for Atlanta. He was hit by a pitch to begin the ninth and scored on the go-ahead run on Johan Camargo’s second double of the game, a sharp one-hopper that shortstop Cliff Pennington couldn’t backhand.

“If you put the ball in play, good things can happen,” Snitker said.

Camargo drove in two runs and Ender Inciarte had three hits for the Braves, who led 3-0 after four innings. Acuna scored on Kurt Suzuki’s two-out single in the eighth to make it 4-all.

Kevin Shackelford (0-1) took the loss in his first appearance of the season since coming off the disabled list. The Reds dropped to 5-19, matching the 1931 team for the worst 24-game start in club history.

Joey Votto’s two-run drive, his second homer in two nights, got the Reds on the board in the fifth.

Reds starter Brandon Finnegan, who opened the season on the disabled list with a strained left biceps, allowed two earned in five innings.

“We made it tough on Brandon Finnegan,” manager Jim Riggleman said. “We missed a couple opportunities and fell behind early but we scored four after missing a couple.  It came back to bite us.”

Braves starter Matt Wisler was roughed up for nine hit and four runs in five innings.

Adam Duvall was called out to end the fifth inning while trying to score the tying run from first on Scott Schebler’s double, but a video review requested by the Reds led to the call being overturned after a 2-minute, 10-second look.

A 33-second video review showed that Nick Markakis beat out what originally was ruled to be a double-play grounder with nobody out in the Atlanta ninth.

Albies’ fifth-inning home run was his seventh of the season. He hit six in 57 games last season.

NEW YORK (AP) — For anyone unable to see him out there: Didi Gregorius had another huge night.

Make that Tyler Austin, too.

Gregorius homered for the fourth straight game and added two RBIs to his major league-leading total, going 3 for 3 with two walks to send the New York Yankees past the Minnesota Twins 7-4 in a hazy fog Wednesday for their fifth consecutive victory.

“He’s playing great. He really is,” manager Aaron Boone said. “I thought a lot of guys did a lot of good things tonight to contribute to that win.”

Austin hit a three-run shot and made a sparkling defensive play at first base to stop a Twins rally. With a fine effort from the bullpen, New York handed Minnesota its sixth defeat in a row — the team’s longest skid since a seven-game slide in September 2016.

Gregorius had an RBI single in the first, a solo homer in the third off Lance Lynn (0-2) and a bunt single to beat the infield shift in the sixth. He leads the majors with 29 RBIs, and all nine of his home runs have come at Yankee Stadium.

“Try to stay consistent,” he added. “I do have a lot of home runs, but it’s not like I’m going out there trying to hit them. I’m not the power guy.”

PITTSBURGH (AP) — Jose Osuna, called up from the minor to serve as an extra player for the second game of a doubleheader, hit a three-run homer to lift the Pittsburgh Pirates to an 8-3 victory on Wednesday night and a split with the Detroit Tigers.

Major League Baseball rules allow teams to carry a 26th man in second games and the Pirates recalled the right-handed hitting Osuna from Triple-A Indianapolis to play right field against lefty Matthew Boyd. Osuna then opened the scoring with a shot to center field in the second inning.

In the first game, Nicholas Castellanos had four hits and a key home run, and the Tigers used 20 hits to outslug the Pirates 13-10. The teams combined for 34 hits, including four from Detroit slugger Miguel Cabrera and three from Jeimer Candelario, who scored five runs.

“We don’t care about Mookie, we care about the Bruins,” Hanley Ramirez joked in the locker room after Betts’ latest offensive outburst helped the Boston Red Sox snap their season-high three-game losing streak with a 4-3 over the Toronto Blue Jays on Wednesday night.

Betts homered twice and drove in three runs as the Red Sox improved to 6-1 in one-run games and got their 18th win of the season, tying the franchise record for victories before May 1.

SAN FRANCISCO (AP) — Washington manager Dave Martinez insisted Trea Turner and the Nationals would snap from their scoring slump soon, even as the losses piled up and the runs didn’t.

Turner got five hits, Matt Adams homered and drove in six runs, and the Nationals broke out of their offensive funk in a big way, routing the San Francisco Giants 15-2 Wednesday to end a four-game losing streak.

“That was fun,” Martinez said after his team dodged a three-game sweep. “The boys came out to play. They’ve been swinging the bats well. Today we just got hits, the timely hits. It was good day for all of them.”

The Nationals had totaled just eight runs during their skid. Andrew Stevenson had two doubles, two singles and four RBIs as Washington set season highs for runs and hits (18).

Albert Pujols connected off Verlander for his 619th career homer. Pujols has 2,994 hits.

Verlander (4-0) held the Angels hitless into the fifth inning before Zack Cozart singled with two outs. Verlander gave up two runs and four hits, striking out nine without a walk. Verlander won his 11th regular-season decision in a row, dating to mid-August last year, before the Detroit traded him to Houston. Ken Giles pitched a scoreless ninth for his second save.

76ers roll past Heat in Game 5