Salisbury slips by South Rowan in the rain, 3-1 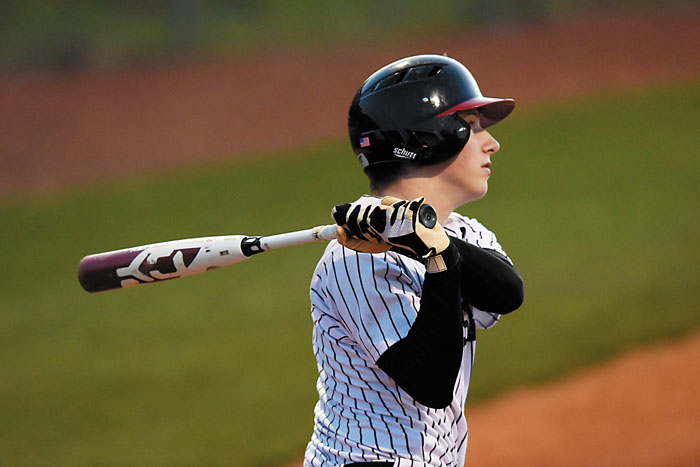 Despite a steady rain that made the ball difficult to grip and sure-footing obsolete, the Hornets produced just enough pitching, hitting and defense to slide past visiting South Rowan.

“We knew it was going to be iffy the whole night,” coach Mike Herndon said, sheltered in the Salisbury dugout after an abbreviated, 3-1 Central Carolina Conference victory. “That’s why we dumped the jayvee game and moved the varsity to a six o’clock start. We knew it could happen like this.”

It worked out well for Salisbury (14-8, 11-6), which prevailed over the Raiders and the conditions in five innings, ending a two-game skid. South (9-13, 7-10) threatened in the top of the sixth, putting two runners on base with two away when the umpires waved everyone off the field. Moments later, as the rain intensified and water puddled the infield, the game was called.

“I was having trouble gripping the ball,” said relief pitcher Griffin Myers, who spelled Salisbury starter Jack Fisher in the top of the sixth. “I would have liked to have finished the inning, but that’s how it goes.”

Fisher was credited with a complete-game two-hitter. He struck out three, walked two, induced seven groundouts and yielded only an unearned run that scored following his own fifth-inning throwing error and a wild pitch. The senior left-hander won his sixth game.

“He was Jack Fisher today,” said catcher Bo Rusher. “He came out here and threw five innings, gave up a couple a hits and gave us a chance. You can’t ask for much more.”

The Hornets jumped to a 2-0 lead against South right-hander Zach Powers in the last of the first. Myers beat out an infield hit to start the rally and Rusher followed with a grounder that glanced off second base and into shallow center field. With runners at the corners, Rusher stole second and Griffin scored the game’s first run when South catcher Jarrid Nelson’s throw sailed into the outfield.

“Their pitcher was just giving one look over to first and throwing home,” said Rusher. “I was watching him from the dugout before I came up. He’d look over once, count to two and go. He also had that big leg kick, which helps baserunners.”

Salisbury’s second run crossed when Joe Steinman served a two-out double to the gap in right-center. Both runs were unearned.

Powers — a 6-foot-7 basketball standout — also went the distance and surrendered five hits, but only two after the first inning. He worked out of jams in the second, third and fourth innings before allowing another unearned run in the Salisbury fifth. This time Rusher grounded a two-out single up the middle and swiped second base. With slugger Chandler Lippard at the plate, Powers whirled and seemingly picked off Rusher wandering several feet off the bag. But a short rundown ended in disaster, as shortstop Jaxon Miller’s throw to third skipped past Garrett Harrington, permitting Rusher to race home.

“The ball ricocheted off of Bo and came over here,” said Herndon, stationed in the third-base coach’s box. “And the catcher was backing the play up, but that left no one covering home. That was the second time in the game I yelled, ‘Hey, nobody’s covering. Run.'”

It made up for the run Salisbury allowed in the top of the fifth. Fisher pitched himself into a jam, allowing Nelson’s leadoff single to left and walking Harrington on a 3-2 pitch. A perfectly placed sac bunt by Powers put two runners in scoring position with one out before Sam Kincaid reached on an error to load the bases. Following a force-out at the plate, the tiring Fisher uncorked a run-scoring wild pitch.

“Mainly, I was trying to throw the fastball down the middle,” Fisher said. “It was tough, trying to grip it in the rain. Guess I was a little inefficient.”

Perhaps, but efficient enough. The game’s best defensive play was made by Salisbury right-fielder Blaine Shellhorn, who robbed South’s Bryson Bebber with a running catch in the top of the fourth. He sprinted to the foul line and made a reaching grab some 320 feet from home plate.

“It was his best catch of the year,” said Myers. “Now we’ve just got to finish this thing the way we’re supposed to.”

NOTES: The teams meet again tonight in Landis in the regular-season finale. The CCC tournament begins Monday. … Fisher was removed after throwing 69 pitches, meaning he can pitch again Monday if needed. A 70th pitch would have required a four-day rest. … Kincaid lined a third-inning single to left for South’s first hit, but was retired on an inning-ending double play initiated by shortstop Vance Honeycutt. … Rusher went 2-for-3 and raised his batting average to .453. Steinman’s RBI was his 16th.