‘Happy hour’ tax cut bill may be headed for a hangover 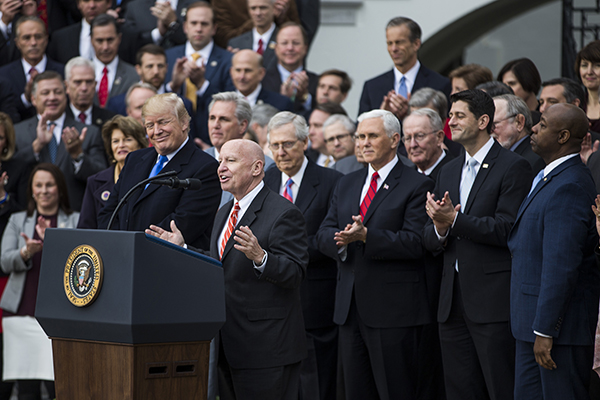 Rep. Kevin Brady, a Republican from Texas and chairman of the House Ways and Means Committee (center) speaks during a tax bill passage event with President Donald Trump (left) and Republican congressional members of the House and Senate on the South Lawn of the White House in Washington, on Dec. 20, 2017. Bloomberg photo by Zach Gibson.

Evidence is mounting that the $1.5 trillion tax-cut package enacted in December by congressional Republicans and President Donald Trump was a bad idea, not only for the long-run health of the economy but for the short-term political prospects of the GOP.

Then how about believing economists at the investment bank Morgan Stanley or the International Monetary Fund? In separate reports issued on Tax Day, they predicted that the benefits of the tax cut would largely blow themselves out in two years, after which an economic downturn is likely. And because of deficits created by the tax cuts, they said, Congress will have fewer options for nudging the economy out of recession with stimulus spending.

While the tax cuts have sparked a surge in stock prices and continued low unemployment, Morgan Stanley analysts said, the “feel good factor” from the tax cuts may be short-lived. “For investors, this means it is less ‘morning in America’ than ‘happy hour in America.'”

Worse, from the Republicans’ standpoint, are poll results showing that Americans have figured out that they were scammed. An NBC News/Wall Street Journal poll published before Tax Day found that just 27 percent of Americans think the tax-cut bill was a good idea, down from 30 percent in January.

Republicans were hoping that as Americans saw more money in their paychecks, the bill’s popularity would grow. Instead 53 percent of those polled weren’t sold on potential benefits, saying the overall effect would be negative because of higher deficits and because wealthier taxpayers and big corporations were hogging the benefits.

Their suspicions were on target. The market research firm TrimTabs reported that in the first quarter after the tax cuts took effect, corporations spent $305 billion in tax savings on cash mergers and buying back their own stock, moves that inflate stock prices. This benefits investors and executives whose compensation is tied to stock prices. Only $131 billion was dedicated to wage growth. At that rate, pay raises over the next five years won’t greatly exceed the slow wage growth of the last five years, CNBC reported.

In a speech in St. Charles in late November, Trump said, “The beating heart of our plan is a tax cut for working families. We’re going to make sure that you keep more of your hard-earned money.”

Most working families will eventually see more cash from the tax cuts. But they know better than their GOP leaders in Washington that happy hour eventually ends. And the hangover can be brutal.