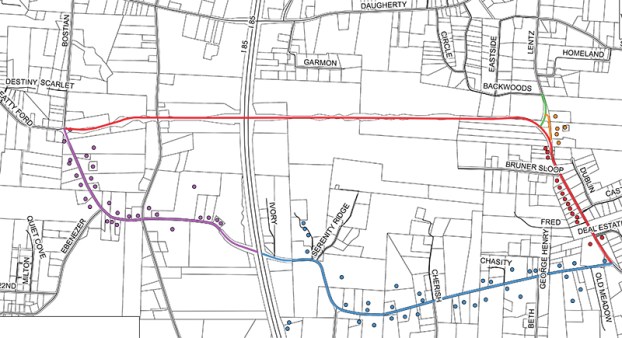 A new I-85 interchange will change Old Beatty Ford Road dramatically. This 2017 map of the affected area show a the red line indicates a street that will become Old Beatty Ford Road. The purple line represents a street that will become an extension of Bostian Road. Freewill Road is name being considered for the street shown in blue. The green line will remain Lentz Road. The small, orange line represents a street without a definite name yet. Each dot is an address that will change.

Only three or four southern Rowan landowners showed up Monday night to hear Duke Energy’s pitch for its Site Readiness Program, but the way property in this choice area develops could have big repercussions for all of Rowan County.

Consider Duke’s interest a sign of   things to come. The I-85 interchange slated for Old Beatty Ford Road will open up a huge area for development. Will that development be residential, commercial, industrial or all of the above? It’s too soon to tell, but an industrial site that attracted major investment could pay off for the county in increased tax base and jobs. If Duke can help identify and improve such a site in the target area, that sounds like a win-win.

Each year, Duke Energy names a handful of sites across its coverage area for the readiness program. Eight Rowan tracts have already been through the process, including the Trevey, Carlton, Sowers Farm and Rusher sites in the northern end of the county, the Brown and Coastal sites in Cleveland and the Platinum and Henderson Grove Church Road sites adjacent to the city of Salisbury. This is the first time southern sites have been considered.

This week’s site discussion dovetails with a presentation Bill Wagoner made on behalf of the Rowan County Chamber of Commerce to the local Mayors’ Roundtable recently. The southern Rowan area would benefit from planning or at least consensus-building about the best use for the land. How to do that is not entirely clear, but getting people to discuss the possibilities is a step in the right direction. Opportunities could range from hotels to shopping centers and housing developments. Landing an industry may require patience and the wherewithal to hold on.

At least with tracts identified by Duke, owners know they’re holding on to more than a pipe dream; they have a viable site.

Laurels to North Carolina’s semi-open primaries, which allow nearly all voters to cast ballots. Even if you’re an unaffiliated voter,... read more