Durant, Green lead Warriors past Spurs into second round 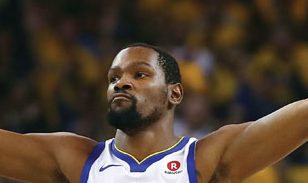 By JANIE McCAULEY, AP Sports Writer
OAKLAND, Calif. (AP) — Kevin Durant scored 25 points, Draymond Green led a smothering Golden State defense and the Warriors held off the late-charging San Antonio Spurs 99-91 Tuesday night to win Game 5 and advance to the second round of the Western Conference playoffs.
Klay Thompson had another stellar shooting performance with 24 points, and Green contributed all over with 17 points, a career-playoff high 19 rebounds and seven assists. Golden State looked dominant until the fourth quarter even without injured two-time MVP Stephen Curry — and he could be back soon from a left knee injury.
LaMarcus Aldridge converted a three-point play with 1:31 left that pulled the Spurs within 93-89, and then a pair of free throws at 57.2 to make it a two-point game. Green responded with a long jumper at the top of the key then two free throws with 9.1 seconds remaining.
The Warriors will face New Orleans in the West semifinals beginning this weekend at Oracle Arena, having smoothly eliminated the Spurs aside from a brief Game 4 blip Sunday at San Antonio. New Orleans, coached by former Golden State top assistant Alvin Gentry, swept Portland in the first round.
Durant didn’t have his usual efficient shooting night, going 8 for 19 and missing his initial six 3-point tries. That hardly mattered. After a rebound late in the first half, the reigning Finals MVP drove coast-to-coast for a huge two-handed slam that helped Golden State grab momentum.
Aldridge had 30 points and 12 rebounds, and Patty Mills added 18 points with four 3-pointers for cold-shooting San Antonio. Manu Ginobili had 10 points and seven assists in what might have been the 16th-year pro’s final game at age 40.
Thompson swished a turnaround fadeaway as the halftime buzzer sounded and scurried for the tunnel hands raised high in triumph as Curry celebrated alongside his Splash Brother.
Thompson became the third Warriors player ever to make 600 field goals in the postseason, and Golden State won its 12th straight playoff game at Oracle Arena.
Coach Steve Kerr challenged the Warriors to make “simpler passes” — or “keep hitting singles” as he put it in baseball terms — to avoid silly miscues after a sloppy showing in Sunday’s 103-90 loss that forced the series back to the Bay Area.
After Golden State committed 16 turnovers and managed only 19 assists in the defeat, the Warriors were far better taking care of the ball with just 10 turnovers while dishing out 25 assists.
They used a 13-3 burst in the second quarter to take a 35-26 lead and command.
Green followed up an 18-rebound outing Sunday with another brilliant night on the boards.
TALKS WITH POP
Spurs assistant Ettore Messina coached San Antonio for a third straight playoff game. He had been waiting for Gregg Popovich to reach out on anything basketball-related as the coach mourns the loss of his wife, Erin, last week following a long illness.
“He will forgive me, but whenever we have a chance to talk to him it’s fine. Whenever we don’t have it, because of the obvious reason, it’s still fine,” Messina said. “There are more important things than screens and transition defense for one time even though transition defense is very important, especially for a coach.”
CURRY STATUS
Kerr didn’t want to guess when Curry might be cleared. The two-time MVP is scheduled to be re-evaluated later this week as he works back from a sprained medial collateral ligament in his left knee that he injured March 23 the same night he returned from a six-game absence with his latest right ankle injury.
“We’ll see. We are locked in on tonight. Steph has been coming into the gym every day working and he’s doing his thing and we are doing ours,” Kerr said. “We are just hoping for the best. Not making any predictions.”
TIP-INS
Spurs: Danny Green was 0 for 5. … San Antonio is 2-8 all-time on Golden State’s home floor in the postseason. The Spurs were swept in the Western Conference Finals by the Warriors last year. … The Spurs shot 37.2 percent, going 7 for 30 from 3-point range.
Warriors: Thompson joined Rick Barry (699) and Curry (652) as the Warriors with 600 postseason field goals. … … Durant (3,189) passed Paul Pierce (3,180) for 20th and Kevin McHale (3,182) for 19th place on the career NBA postseason scoring list. … Golden State is 18-2 in postseason Game 5s at home. … Green notched his 38th postseason game with 10 or more rebounds.
___
More AP NBA: https://apnews.com/tag/NBAbasketball