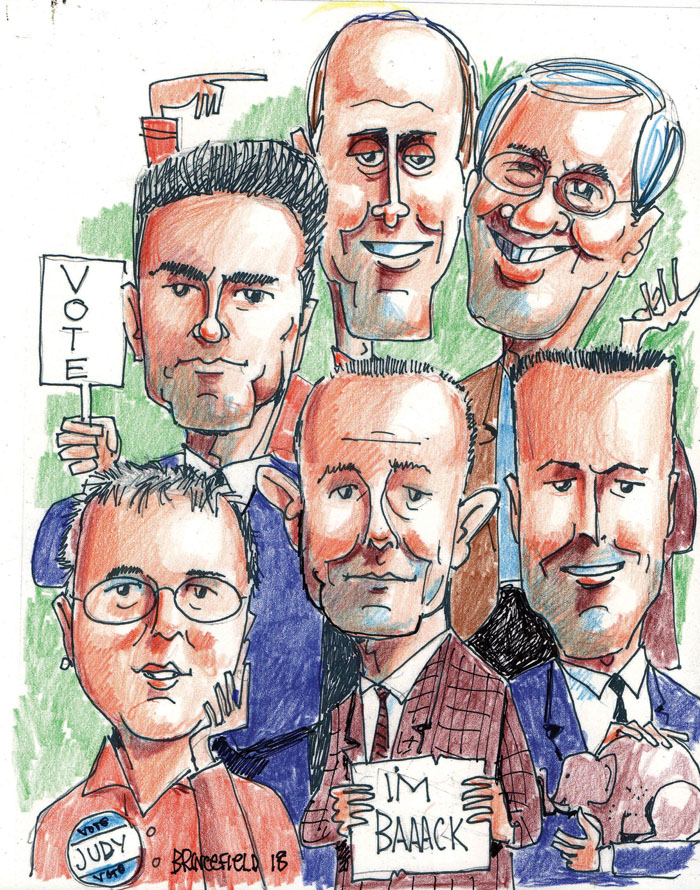 Illustration by Mark Brincefield Rowan County Board of Commissioners candidates.

The forum gave candidates an opportunity to address issues of concern for county residents, ranging from the old Salisbury Cinema and West End Plaza to airport expansion.

One was whether county leaders favor Salisbury over other municipalities and what principles should guide the board when making decisions that affect specific municipalities in the county.

The second concern was voiced by audience member Bill McCubbins. He said he wanted to know more about Easter Creek, the company behind speculative buildings in Granite Quarry.

What is the company, he asked, and why did it get free land from the county? He asked why the company was allowed to violate a contract that said the building would be completed by January.

On the concept of commissioners favoring Salisbury

Judy Klusman: “Every municipality that is in this county is part of Rowan. … When I think about representing all the people on the county commission, to me it doesn’t matter where they’re from. I think that’s really important to be able to look broadly at issues.”

Craig Pierce: “Every municipality in this county has its own board. They’re elected officials by those people that live in those municipalities. When they come to me with a problem, I will listen, but I’m not going to go to them and say, ‘Tell me what you need, because I’m going to give you some money.’”

Michael Julian: “I’ve visited seven of the 10 municipalities in the county already because they’re all important. … If they come to us and say, ‘We need help,’ it’s our job to do what we can as county commissioners to help them. But we can’t go to every one of them and say, ‘What do you need?’ because then you’re going to get bombarded.”

Greg Edds: “This is a continuing thing that I hear and actually it’s kind of a narrative that’s being pushed, and it’s kind of cynical: … ‘We don’t do anything unless it benefits Salisbury.’ That is the stuff of, I don’t know, unicorns. It doesn’t make sense. We have paid attention to all of the municipalities. “

Jim Greene: “It’s in Rowan County’s best interest to have a good, thriving municipality wherever it is. We do our best to help each of them. … Sometimes things come up that we are forced to do because Charlotte’s coming this way and we have to plan for it. … So far, we have spent less money in Salisbury than probably any other place.”

Pierce: “This is the only thing that I voted against that had an incentive package tied to it. … To me, to give these people land to build a building and they’re not guaranteeing any jobs, that violates the ordinance that’s in the state statute that says the only way you can convey property is if it’s tied to jobs.”

Julian: “The contract was not fulfilled because they were supposed to have all of this work done by Jan. 1. … If we’re going to provide incentives and provide land, then the people that we’re giving that to need to hold up their end of the bargain and bring the jobs and bring the tax revenue to the county.”

Edds: “These folks want to invest $30 million in our community. … There’s a clause in this contract that everyone agreed to that said if you run into some issues, we’ll forgive that. They ran into $400,000 worth of bad soil over four months. … Do you want to rip this away from a company that wants to invest in Rowan County?”

Greene: “The Easter Creek group came and they looked at the facility that we had down there, and we came to a legal contract with it. We called Raleigh. We talked with attorneys down there that were used to doing incentives, they said, ‘No, this is fine. … There’s nothing illegal about it.’ … There never has been anything secretive about this.”

Klusman: “What I learned about this family from Welcome, North Carolina, was that they were very, very successful business people and they wanted to reinvest in our state. Wouldn’t it be great if we had a hundred more Easter Creeks to bring more jobs and more economic development to our county and our state? If we don’t have the inventory and infrastructure, (businesses) … won’t come.”