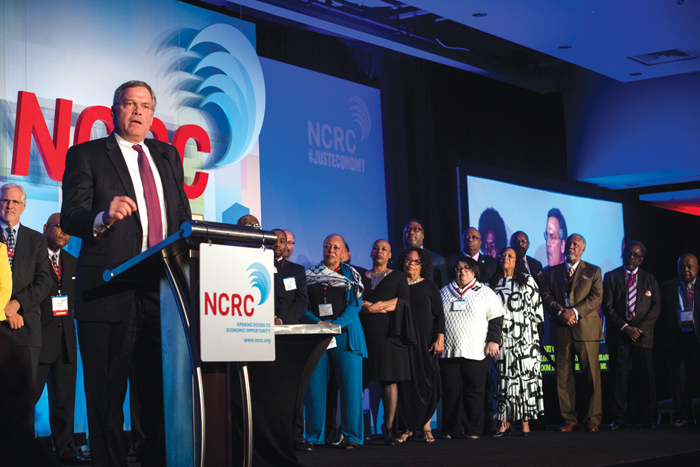 SALISBURY — Bryan Jordan remembers delivering the Salisbury Post with his brother, Jeff,  and his father, David, when Bryan and Jeff were barely teenagers.

“It is a great community to grow up in,” Jordan said. “My brother, sister (Lyn Jordan Beaver) and I all really enjoyed the time we had there.”

Jordan is now chairman and CEO of First Horizon National Corp., which owns both Capital Bank and First Tennessee Bank.

He announced earlier this month that First Tennessee — in partnership with the National Community Reinvestment Coalition — will commit $3.95 billion to community development across its eight-state footprint.

One of the states in its footprint is North Carolina, and Salisbury has several Capital Bank branches. Capital Bank was recently purchased by First Tennessee.

“(First Horizon) has a deep history of giving back both time and financial resources, and over the last couple of years we have developed a strong partnership with NCRC,” Jordan said. “And as we engaged in this process, we knew we wanted to do more for our community and in a way that made the biggest economic impact.”

The $3.95 billion investment will be available for five years, through 2022.

And $1.9 billion of the $3.95 billion will be allotted for lending to businesses in low- to moderate-income areas and businesses with less than $1 million in annual revenue.

Another $515 million will be allotted for home purchases and rehabilitation mortgage lending. According to a news release, that will translate to 967 new homes for people of color and 533 homes for low- to moderate-income people across the eight states.

Another $1.5 billion will go toward community development and projects involving multifamily lending and investments.

And $40 million will go toward grants and philanthropy that support things like workforce development, small business and financial literacy education.

Jordan said the decision on how to implement the program came after about 10 months of one-on-one and group discussions about how to best assist people in its coverage area.

“We constructed it with comprehensive discussions with community groups,” Jordan said. “It’s a very broad agreement.”

Adam Rust, who works for Reinvestment Partners in Durham, was involved with developing the agreement.

Rust also has a connection to Salisbury — his wife is Susie Post-Rust, a daughter of former Salisbury Post reporter Rose Post and sister of Mayor Pro Tem David Post.

Rust said that when First Tennessee Bank bought Capital Bank, Reinvestment Partners thought that might mean “a loss of input or community involvement.”

“So groups and leaders in North Carolina met with them to say, ‘When you’re buying this bank, you have to make sure you’re still committed to the community,’” Rust said.

During a negotiation meeting for the agreement, Rust said he had a “funny moment” before he knew that Jordan is from Salisbury.

“I knew that (Capital) had a branch in Rowan. So I said, ‘If you look at the example of Rowan, there’s a lot of need and capable nonprofits and community development. I know this because my wife is from Salisbury,’” Rust recalled.

Rust said Jordan looked across the room at him and said, “Salisbury?”

Rust and Jordan soon realized that Post-Rust was in Jordan’s graduating class at Salisbury High School.

“The whole room transformed from a zero-sum paradigm to, ‘Wow, what a small world we all live in,’” Rust said.

Rust said that for those who want to take advantage of the $3.95 billion investment, he doesn’t think the process will be “mysterious.”

“They should have programs available up front,” Rust said. “People should reach out to the bank or go to the local bank.”