76ers roll past Heat in Game 5 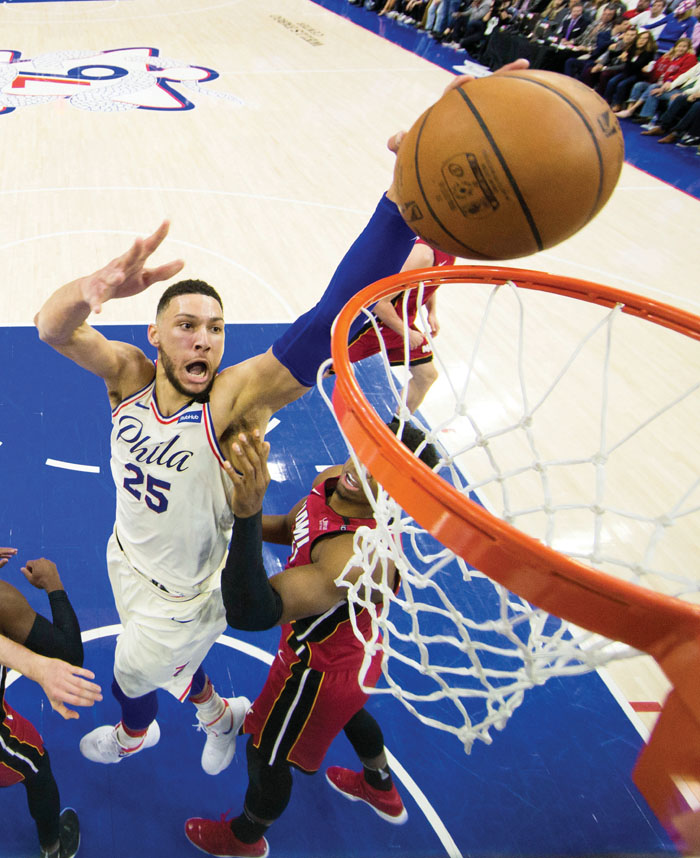 PHILADELPHIA (AP) — Joel Embiid hoisted diminutive comedian Kevin Hart not unlike the way a parent would toss up a toddler. Embiid then pulled him in for a hug as confetti rained on the court, team flags waved around them and the promise of a rowdy late-night celebration was on deck.

Hart grabbed the mic and yelled, “Let’s give it up for Joel Embiid!”

The 76ers are rolling in the postseason — and rappers, politicians, actors and athletes are dancing along in the ride.

Embiid and Ben Simmons shined again in front of rapper Meek Mill, and the dominant duo ushered the nightmares-into-dreams Process of the Philadelphia 76ers into the second round with a 104-91 win over the Miami Heat on Tuesday night.

The 76ers, winners of 10 games just two seasons ago, are in the second round of the Eastern Conference playoffs for the first time since 2012.

“I kind of promised the city this,” Embiid said.

The Sixers won the series 4-1 and turned the Wells Fargo Center into the wildest house party in the city. Embiid had 19 points and 12 rebounds, Simmons had 14 points and 10 boards, and the entire team was energized by Mill’s surprise appearance. Mill made a dramatic return hours after Pennsylvania’s highest court ordered him freed while he appeals decade-old gun and drug convictions.

He was taken from prison by helicopter to Philadelphia, where he rang the ceremonial bell at the start of Game 5.

“Welcome home Meek Mill,” was about all that was heard from the public address announcer as wild cheers drowned out the rest. Mill sat courtside next to Hart and Sixers co-owner Michael Rubin.

Before the game, Mill visited privately with the Sixers in their locker room.

“For him to come to this type of game … I was just happy,” Embiid said.

Hart talked trash, wandered onto the edge of the court to rile up fans and palled around with Mill as the young and gettin’ it Sixers proved they just might be the team to beat in the East.

They’ll have plenty of time to rest and recover — Embiid again played in a black mask to guard a face injury — with the other Eastern Conference playoff series expected to stretch into the weekend.

They await the winner of Milwaukee-Boston. The Celtics lead the series 3-2.

The 76ers were buzzing once Mill’s release made headline news in the city. Rubin had organized prison trips with Embiid, Simmons and Markelle Fultz, and the rapper’s songs played in the locker room and during warmups.

“Just having someone that looks out for us, all of us here, it would just mean a lot for him to be back in Philly, in the city of Philadelphia with the fans, especially with a game like that tonight,” Simmons said.

Mill breezed into the locker room about 45 minutes before tip and hugged some of the Sixers. Mill was met with a crush of media and celebrity fans as he tried to take his courtside seat. Eagles owner Jeffrey Lurie and retired boxing great Bernard Hopkins sat near Hart and Mill, and Democratic Gov. Tom Wolf joined them in the second half. The national champion Villanova Wildcats posed for pictures with Mill in the locker room.

What they saw was just the latest beatdown from a franchise whose maligned rebuild has morphed into the one of the trendiest terms in sports.

The Sixers outscored the Heat by 14 in the third quarter to snap a tie game and had fans belting “Trust the Process!”

Goran Dragic was whistled for a technical after slapping Simmons on the backside of his head, and that got the crowd howling early in the third. Simmons kept his cool — the rookie is rarely rattled — and made the Heat pay. JJ Redick sank the free throw off the technical, and Simmons kicked the ball out to Robert Covington on the possession for a 3 and a 54-48 lead. Redick followed with his third 3, and Philly was litty again.

Redick, who scored 27, sank the dagger late in the fourth that got the party started. Coach Brett Brown was showered with water and sports drinks in the locker room.

Heat: Josh Richardson played with a sprained left shoulder. He picked up three fouls in his first 2 minutes. … James Johnson was hit with personal and technical fouls late in the fourth that ended a 10-0 Miami run. … Justise Winslow led the Heat with 18 points.

Dwyane Wade is considering retirement. He congratulated Embiid after the game (“the NBA is in great hands with Joel”) and said he “couldn’t have asked for a better ending” this season than to return to the Heat. Wade did not announce a decision on his future.

“You’re going to make me emotional if we start to think about that or talk about that right now,” Heat coach Erik Spoelstra said.

BOSTON (AP) — Al Horford has been the Celtics’ quiet leader this postseason, and Marcus Smart might be the kindling Boston was missing in back-to-back losses in Milwaukee.

The duo was reunited for Game 5, and together, they helped put the Celtics on the verge of closing out their first-round series.

Horford had 22 points and 14 rebounds, Smart made an impact in his first game since mid-March and Boston beat the Bucks 92-87 on Tuesday night for a 3-2 lead.

Smart came off the bench and had nine points, five rebounds, four assists and three blocks in his first action since right thumb surgery. He played 25 minutes wearing a protective splint and had a key assist to Horford late from the bottom of a scrum beneath three Milwaukee players.

Terry Rozier added 16 points and five assists for Boston. The home team has won all five games in the first-round series, and Game 6 is Thursday in Milwaukee.

Khris Middleton led the Bucks with 23 points, Jabari Parker added 17 points and eight rebounds, and Giannis Antetokounmpo had a series-low 16 points with 10 rebounds and nine assists.

The Celtics led by 16 before Milwaukee rallied to make it 74-70 with 7:33 left. Middleton scored later and was fouled to get Milwaukee within 84-79, but he failed to complete the three-point play.

A few possessions later, Smart managed to squeeze out the pass to Horford with three Bucks draped over him, and Horford easily dropped in a layup to make it 86-79 with 28.1 seconds left.

Milwaukee got within 87-84 after a layup by Eric Bledsoe, but the Celtics hit enough free throws the rest of the way to secure the win.

The Bucks entered the game shooting an NBA playoff-best 54 percent from the field, but they hit just 37 percent for the game (32 of 87) — a series low.

Boston needed an energy boost after slow starts in Games 3 and 4, and Smart gave the Celtics exactly that.

He checked in for the first time late in the first quarter. Less than a minute later, he deflected a pass and won a scramble on the floor for the loose ball.

A few possessions later, he was helping protect the rim, getting his hand in to deny an alley-oop dunk attempt by Antetokounmpo.

He was also active on the offensive end, helping drive the ball into the interior of Milwaukee’s defense, like when he tossed an alley-oop to Horford late in the third quarter .

Boston made a change to a smaller lineup, shifting Horford to center in place of Aron Baynes and starting Semi Ojeleye at forward.

“It’s on me. I had open shots, but they wasn’t my shots,” Antetokounmpo said. “I think my teammates did a great job finding me, but coming the next game, Game 6, I’ve got to be more aggressive and make more plays.”

Bucks: F John Henson missed his third straight game with back soreness. … Scored 15 points in first quarter. It was low for a quarter in the series, excluding the Game 1 overtime period (eight points).

Celtics: Finished with 18 turnovers. … Outscored the Bucks 32-28 in the paint.

“It’s win or go home, so I mean you can’t leave nothing on the line. That’s pretty much how you play this whole playoffs — you leave it all out there. Tonight we had too many lapses where we just didn’t want it as bad as they did.” — Middleton

DROUGHT AND A RUN

The Celtics went without a field goal from Rozier’s 3-pointer with 9:14 left in the third until Jaylen Brown hit from beyond the arc with 4:26 to go in the period.

Rozier and Eric Bledsoe got tangled up with 9:33 left in the third quarter. Rozier bumped Bledsoe near the baseline. Bledsoe responded with a hard shove. They then got face-to-face and had to be separated.

Bledsoe was assessed a flagrant foul and Rozier was issued a technical foul.

It was the continuation of some off-court chiding between the pair.

Rozier called Bledsoe “Drew Bledsoe” when asked about him after Game 1. Bledsoe has since responded by saying “Who?” whenever he’s asked about Rozier.