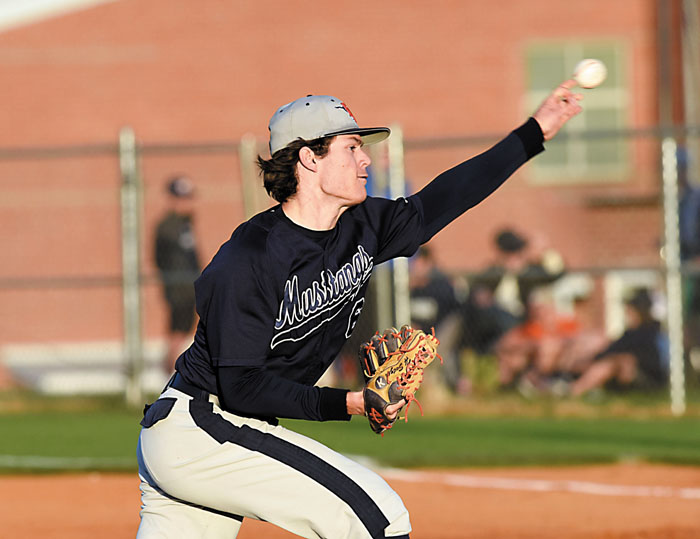 GRANITE QUARRY — With a spectacular senior season, darkhorse Hayden Setzer has tossed his East Rowan cap in the ring for all the postseason accolades — including Pitcher of the Year and Player of the Year.

Setzer is batting .397 with 11 extra-base hits and 27 runs scored as East’s dynamic leadoff hitter. The left-hander is also 5-1 on the mound with wins in each of his last five starts. His ERA stands at 1.36 — and dropping — and he’s struck out 48 while walking 14. His lone hiccup came early against Lake Norman, where he struggled with command and suffered his only loss. His last two starts, including a monster 1-0 win against North Piedmont Conference leader Carson and Owen White, the state’s 3A player of the year in 2017, have been shutouts.

Setzer looks the part of a hero. Facially, he looks like his brother, Luke, the senior Catawba outfielder. Physically, he looks like L.A. Dodgers third baseman Corey Seager. He’s muscled like a linebacker at 190 pounds and stands at least 6-foot-3. With his thick, dark hair combed back, Hayden looks like the actor Hollywood would cast to star in a movie about a high school baseball star.

Setzer had Division I offers, but he has chosen to play for Catawba College. His signing party at East was on Monday afternoon.

“We’re very lucky to get him,” Catawba coach Jim Gantt said. “He’s got a lot of tools. He’s got size, he can run, and he’s got a left arm that works great. He certainly passes the eye test.”

Setzer has a chance to be a two-way player for Catawba, although at some point, his focus may shift exclusively to the mound.

“They’re going to give me a chance to hit and pitch,” Setzer said. “Coach Gantt said I can do both until I prove that I can’t.”

“Catawba is local, and Coach Gantt has coached me in American Legion, so I know exactly what I’m getting into,” Setzer said. It’s a great program. I know I can develop there. The goal and the dream is to get drafted someday. That’s what I’ll be working for.”

Just two years ago, Setzer was still an average guy. He only had 12 varsity at-bats as an East sophomore. Even though he’d shown promise as a pitcher since his middle school days, he was 1-3 on the mound.

But the summer of 2016 between his sophomore and junior seasons, was when the Rowan County American Legion team played forever and finished as national runner-up. Setzer was still figuring things out at that point, he was still more potential than production, but he was part of that run. All those reps and practices and knowledge gained that summer accelerated his career.

“What changed for me between my sophomore year and junior year was confidence,” Setzer said. “I just steadily built confidence.”

He got stronger. His body filled out. He matured emotionally. He believed he could do it as a junior, and belief is a powerful thing. His junior season as a two-way player for East was outstanding. He batted .342 and went 7-2 on the mound with a 1.30 ERA. Of his seven mound wins, six came in conference games and one was in the 3A state playoffs. Even on a team with Chandler Blackwelder and John Owen, Setzer had blossomed into a standout. He was an easy choice for the All-Rowan County team.

Setzer expected to bat in the middle of East’s lineup as a senior, but Hightower had other plans.

“We’ve hit him leadoff, and I know that’s hurt his RBIs some (he has 14), but his on-base percentage, all the walks he draws, make him our best option as a leadoff guy,” Hightower said. “There’s a good chance he’s going to get on base and get us off to a good start. Against Carson, he leads off the game with a big double and scores the only run in a 1-0 game.”

Setzer hit a 2-and-0 fastball from White for that double and scored on a hit by Wayne Mize.

“Playing against someone as good as Owen, you get excited about the challenge,” Setzer said. “I got in a good count and I got a pitch to hit.”

Setzer’s OBP is a team-best .488 for the 15-5 Mustangs, and he’s generated so much power that his OPS (on-base percentage plus slugging percentage) is an outstanding 1.164. He has six doubles, two triples and three homers. He’s 7-for-8 on steal attempts and he’s a capable center fielder when he’s not on the mound.

At Catawba, Setzer will follow his brother, Luke, who has enjoyed a remarkable career with the Indians. Luke was South Atlantic Conference Player of the Year in 2017 , SAC Male Athlete of the Year for all sports and a first-team All-American.

Hayden always has looked up to Luke.

“Having a brother that good has helped me more than I can say,” Hayden said. “In the batting cage, with his advice on a lot of things, he’s been a big part of my growth.”

Luke is the person who is the least surprised by his tall sibling’s success.

“Hayden’s work ethic is off the charts,” Luke said. “Every year he makes great gains physically. That’s just going to continue at Catawba. Coach Gantt will get the best out of him.”

Hightower thinks Hayden’s best could mean another Catawba star from the Setzer family. And it could mean success past college.

“Hayden is very special,” Hightower said. “As good as he is right now, he’s only scratching the surface of his potential.”