“A great man and a great ambassador:” Sports community mourns the loss of umpire JT Bost 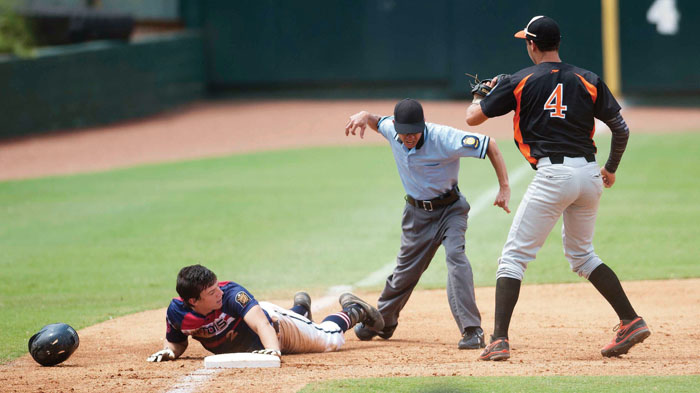 Umpire Brian Pitts was scheduled to work a Sunday baseball game more than an hour from his Mocksville home.

It was Thomas Nelson Community College versus Rockingham Community College in Wentworth, N.C., not exactly a headliner, but no ballgames can take place without umpires. Pitts’ scheduled umpiring partner was  Jonathan Thomas Bost, a diminutive, always-on-the-go 45-year-old known to the sporting world simply as “JT.”

Pitts always looked forward to working with Bost, who lived in China Grove.

Bost and Pitts had confirmed their mutual assignment through text messages on Saturday. First pitch for Rockingham-Thomas Nelson was set for noon. “See you at 11,” Bost texted.

By 11:30, Pitts was on the phone. A substitute for Bost was located. The show had to go on. But even as Pitts took the field at noon with his replacement partner, he was still expecting JT to make a breathless arrival.

“It wasn’t until after the game started that I started getting texts from all over the place from the umpiring fraternity,” Pitts said.

All the texts carried the same awful message. JT was gone. He had died from injuries sustained in an accident on Interstate 85 near Archdale late Saturday night. He’d apparently been returning home from an umpiring assignment when the crash occurred.

Fiery East Rowan baseball coach Brian Hightower was occasionally an adversary of Bost over the years, but they respected each other. At the end of the day, after the heat of battle cooled, they were always friends.

For a decade, Bost had booked the umpires for the smooth-running fall baseball league that included Hightower’s Mustangs and most of the other area schools.

When it was necessary, Bost booked himself to umpire. Pitts recalls Bost umpiring six consecutive fall league games on a Saturday. He didn’t mind. He loved it.

“JT was just a great dude,” Hightower said on Monday morning. “I’ve been getting calls from all over the place today, from people who are just torn up about his death. I’ve gotten calls from Charlotte. Everybody knew him. So many guys worked with him and everyone liked him. He was very professional in everything he did and he had a real passion for umpiring. This is a tremendous loss to all sports in the area, but especially to the baseball community.”

Bost, the father of six, loved teaching and loved sports.

In addition to baseball, Bost officiated basketball and football on a regular basis. He was a registered volleyball official, and he was a swimming official who had conducted major meets, including the Rowan County Championships.

Joe Pinyan, the Carson head football coach, has known Bost for a long time and in a lot of different circumstances. They were colleagues as teachers at Salisbury High when Bost taught science there and Pinyan coached football and taught P.E. Pinyan has umpired American Legion games with Bost as his partner, and he’s also been in an occasionally confrontational role when Bost was serving as a football official.

“We all miss some calls as umpires, but you can say this about JT, he always knew the rules, he was always in position, and he always gave his best,” Pinyan said. “As a football coach, I always thought JT was one of the guys you wanted to be working your game because he was approachable. If you didn’t like a call, he’d give you an explanation. He would do his best to work with you, and that’s not easy when you’re dealing with an irate football coach. I saw him handle tough situations very well. As a teacher, he was just a great friend for a lot of people. His plate was always full, but he always went out of his way to help in any way that he could.”

Bost was a sports fan, a sports nut.

“I saw him work a basketball game in the Sam Moir Christmas Classic at Catawba this year,” Pitts said. “That game ends, and then he’s sitting on press row just taking in the next game as a fan.”

Bost was tough, despite his small stature.

Umpiring in Stanly County in late March, Bost took a direct hit from a wayward pitch that broke his left wrist. He still finished the game.

“And the next day he showed up here like nothing had happened,” Hightower said.

Bost was perhaps most visible as an umpire for American Legion baseball. A lot of people knew him, and he heard more catcalls than most at Newman Park because his unique physique was recognizable.

But he stayed confident and he stayed demonstrative. “He did not offer at the pitch!” Bost would scream on a checked swing or a faked bunt.

He was also demonstrative on the football field.

“I always liked seeing him show up on a Friday at Davie County as the back judge,” Pitts said. “He’d let fans know what was going on. He could sell a call. If he didn’t think it wasn’t a legal catch by a receiver, he’d pound the ground three times and let everyone know it was no catch. I can still see him doing that.”

Bost will be missed by newspapers as well as by umpires and coaches. Bost was the volunteer media coordinator for Area III Legion baseball. He got all the other umpires to text him with their scores and he put it all together and then sent those scores to the papers. That’s how papers had up-to-date standings every day. That was a tireless, thankless role, but he relished it because he was helping promote a sport he loved. There were many times that Bost called the Post at midnight, wanting to make sure we’d gotten all the scores we needed and were aware of all the schedule changes.

If you lived in Salisbury and were wondering how that Eastern Randolph-High Point playoff series was going, well, you knew because of the efforts of JT Bost.

He thoroughly enjoyed the job of training and teaching the next generation of umpires and officials.

Pitts said Bost took this year off from teaching science to serve as a caregiver to both his parents. Still, he was working around the clock, booking officials, umpiring games, reporting scores.

He drove all over the place. He worked many Division II baseball games (South Atlantic Conference and Conference Carolinas) and made several trips to Due West, S.C. to umpire games at Erskine College, almost three hours from home.

Bost began umpiring in Rowan Little League as a youngster. His umpiring career peaked last week, on April 18, when he umpired his first Division I baseball game. He served as the third base umpire, part of a three-man crew with Josh Reep and Randy Vestal, when Furman took on Gardner-Webb in Boiling Springs.

Bost was excited about it. It’s incredibly sad that his first D-I game was also his last.