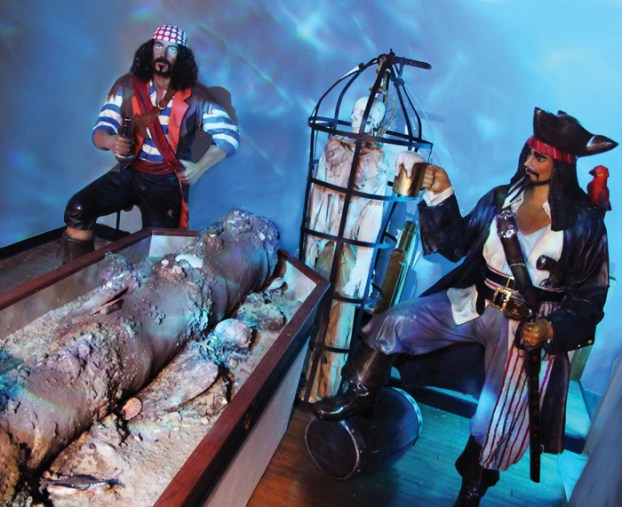 Traveling exhibit to showcase items from Blackbeard the Pirate’s Flagship, the Queen Anne’s Revenge at the NC Transportation Museum in January 2018.

Watch out for pirates this summer

Some of North Carolina’s ferries will be sporting pirate flags this summer.

No, the ferries will not be looting, pillaging and stripping the booty from Tar Heel shipping (although this might be a solution to raising state revenues without taxes).

Rather, the Cedar Island, Hatteras and two smaller ferries will raise a replica of Blackbeard’s pirate flag.

Blackbeard — alias Edward Teach or Thatch, or possibly Drummond — met a gory end 300 years ago, when Lt. Robert Maynard of the Royal Navy cornered him off Ocracoke Island. Some say Maynard chopped off the pirate’s head and hung it from his bowsprit.

The state Department of Natural and Cultural Resources bought the pirate flags for education and tourist-promotion purposes. They’re planning a fall Pirate Festival on Ocracoke.

How ironic: At a time when Confederate former heroes are literally being pulled from their pedestals, the state is going pirate crazy.

In fact, the real-life pirates had more in common with the Crips or the Bloods than with Errol Flynn or Capt. Jack Sparrow. They tended to waylay ordinary sailors and fishermen, stripping their vessels of sails, rope, food and rum. No wonder piracy was a hanging offense.

Still, little kids love pirates, and the excavation of the wreck of Blackbeard’s flagship, the Queen Anne’s Revenge, has been worth millions to North Carolina.

So, pirates it is. Except, Southeastern North Carolina doesn’t get to join in the game.

The bureaucrats at Cultural Resources have a flimsy excuse: They’re only flying the colors where Blackbeard had a historical association.

The Cape Fear region does, however, have a pirate of its own: Major Stede Bonnet, who was captured by Col. William Rhett of South Carolina on Sept. 27, 1718, near modern-day Southport.

To be honest, Bonnet was not much of a pirate. Blackbeard seems to have stolen his lunch and his ships and held him prisoner awhile. The pirate chronicles claim that the former Barbados planter was driven to piracy to escape a shrewish wife.

In fact, pirates didn’t kill as many people outright as advertised (Blackbeard apparently fudged his reputation to get folks to surrender faster), but many of their victims were left with no way to get home and were lost at sea.

But, still, old Stede’s our pirate. It’s Bonnet’s 300th anniversary, too. (The South Carolinians hanged him a couple of weeks before Christmas 1718.) Couldn’t the Southport-Fort Fisher ferries sport the Major’s old pirate flag? It seems only fair.

Learning the ‘free’ part of US speech

From an editorial in the Wilson Times, about free speech at UNC Chapel Hill: Sixty-four percent of students say the... read more