New projects will turn Beacon Hall into a teaching center 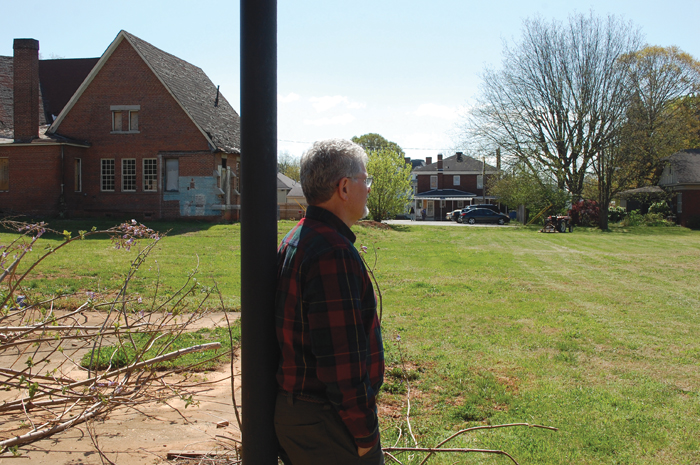 Jody Blackwell looks out over newly established Elm Street Farm. Beacon Hall is in the background on the left. (Jessica Coates/Salisbury Post)

SALISBURY — Jody Blackwell said the two big projects happening at Beacon Hall are different, but they still fit together.

“Whenever I was first thinking of this and teaching, I wanted to have the little kids playing music. And then they could go right out and play in the dirt in the garden,” Blackwell said.

Now, after forming a partnership with the Salisbury Symphony and buying land for Elm Street Farm, Blackwell is well on his way to fulfilling that vision.

Salisbury Symphony Executive Director James Harvey said the partnership with Beacon Hall would involve using the venue as a home for the After-School Strings program.

“Because Beacon Hall is such a centralized location — and I can see what Jody’s doing with this place — it will be an amazing venue for us to consolidate what we’re doing and…make a big impact with education. Instead of having it so dispersed and not running optimally,” Harvey said.

Harvey said that over the last few years the program has seen diminishing enrollment. He said it has been held at three different schools with three “great, dedicated teachers.”

“And our teachers love the idea. We’ve really brought them on board and did a little brainstorm session and they kept on saying, ‘We need to have one location where we can start doing more things,’” Harvey said.

Harvey said the symphony is “not cutting ties by any stretch of the imagination” with the Rowan-Salisbury School System.

“We are actually developing our relationship because we can have master classes with different schools so they can all come together,” Harvey said. “We can do a preschool division of music classes. So it really opens up opportunities.”

Blackwell said Beacon Hall would serve as a “consistent” part of the students’ lives.

“When that little kid walks through that door, everything is exactly the way he thought it should be,” Blackwell said. “Only thing he’s got to focus on is the music.”

Blackwell said he no longer sees Beacon Hall as a music venue where local or touring bands will play.

“That’s the part that changed. If we have someone that wants to come and play, come. We’re not in the business of going out there and trying to find musicians to come in here and play,” Blackwell said. “This is more of a teaching center. That’s what I want this to be. A place not just for music, but thinking.”

Blackwell and Harvey said they hope to have the After-School Strings program moved into Beacon Hall around mid-September.

Elm Street Farm, named for the road that runs alongside it, will occupy the same land that John Hanford’s greenhouses did half a century ago.

“Every bit of this was all greenhouses, and that’s where they processed the roses,” Blackwell said, pointing to a warehouse on the land he purchased.

Blackwell said that, instead of roses, he plans to raise leafy greens and root crops.

“And I want them to be fresh, constantly, all the time,” Blackwell said.

He said he’s dreamt of having a farm for his entire life.

“And it’s not just that. It’s just, I think I’ve been guided here. Too many things have happened. Too many good things,” Blackwell said.

In addition to having his farm — which he imagines will be commercial with a small community garden attached — Blackwell said he wants to teach classes in the old warehouse that will continue to get kids to use their hands.

“I want there to be a blacksmith shop here. I want kids to understand iron and how it formed together and what caused that,” Blackwell said. “It’s one of our simple things that we have forgotten about that we need to know about.”

Blackwell said the ideas for Elm Street Farm and Beacon Hall are still developing. But he said the possibilities are “endless.”

Beautiful weather brings hundreds out for Cruisin’ the Grove