Learning the ‘free’ part of US speech 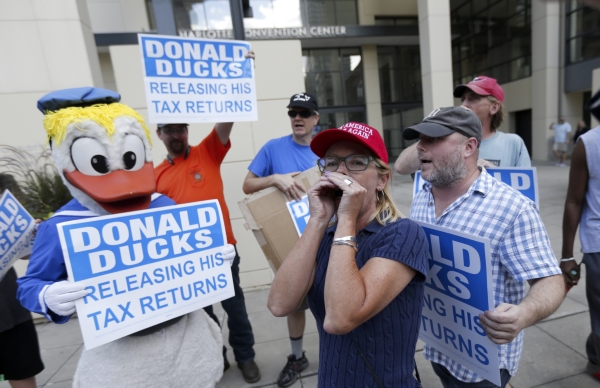 Kristen Peterson of Huntersville, a supporter of Republican presidential candidate Donald Trump, chants 'show us the emails,' as she walks amongst protesters chanting 'show us your taxes,' outside the Charlotte Convention Center in August 2016. AP Photo/Gerald Herbert

From an editorial in the Wilson Times, about free speech at UNC Chapel Hill:

Sixty-four percent of students say the First Amendment shouldn’t protect hate speech. While we join them in condemning racism and bigotry, we note that censorship isn’t the proper remedy. Misguided views can only be defeated when they’re debated, debunked and defanged. Americans confront prejudice rather than shrinking away from it. …

Nearly four in 10 students believe it’s sometimes OK to drown out speakers they find disagreeable, which it is not. The First Amendment protects peaceful protest, but there’s no such thing as a constitutional license for censorship by crowd.

It’s this precise misunderstanding that led some liberals to criticize North Carolina’s campus free speech law passed in 2017. The state statute requires universities to punish those who shout down speakers. Critics feared protesters’ rights could be violated. The case law is clear — demonstrators can picket to their hearts’ content and “fleeting boos” are fine, but yelling over a speaker to prevent him from being heard is a violation of free speech, not a legitimate exercise of it.

Ten percent of students say it’s sometimes acceptable to prevent someone from speaking by the use of violence or physical force. That grim statistic is reflected in the Antifa riots that caused the cancellation of conservative firebrand Milo Yiannopolous’ speech at the University of California-Berkeley in February 2017.

Students aren’t learning civics in high school and arrive on college campuses without a good grasp of the First Amendment and the importance of open debate in a free society. When they’re met by radical professors who conflate controversial speech with physical violence and spineless administrators who capitulate to demands for safe spaces and trigger warnings, universities can have a free speech crisis on their hands.

Fortunately, that isn’t the case at the University of North Carolina.