Beautiful weather brings hundreds out for Cruisin’ the Grove 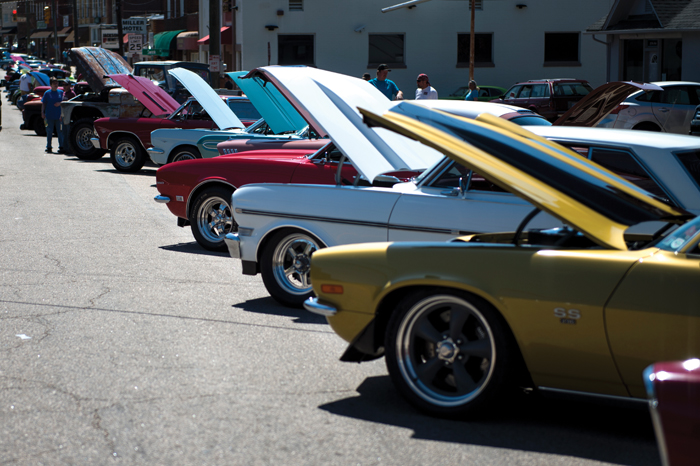 On North Main Street at the China Grove Cruise In on April 21, 2018. (Photo by Rebecca Benson)

CHINA GROVE — Bill Rabon said he’s attended almost every one of China Grove’s cruise-ins since they started in 2016.

But the weather was not bad Saturday afternoon. Mild temperatures and warm sunshine brought the event one of its biggest crowds ever, according to town event coordinator Patti Price.

“We’re thrilled,” Price said. “All of the parking lots are full, so I would say at least a couple hundred (cars are here.) And obviously the spectators are just as important. We love for them to come out and look at the cars.”

Price said the cruise-ins started around the time she joined the town as event coordinator two and a half years ago.

“They always had a car show at Farmer’s Day. So when they hired me, one of the things we wanted to try was to start doing a cruise-in,” Price said. “There were car enthusiasts in the town that had expressed an interest in having them not just at Farmer’s Day.”

Price said the cruise-ins, which she said usually draw crowds, have been great for downtown China Grove businesses.

“We are big advocates of supporting our businesses downtown,” Price said. “And we like to bring people into town and expose them to China Grove, where they can shop and dine and just kind of enjoy the day here.”

The cruise-ins happen four times a year on the third Saturday in April, June, August and October. She said the April and October cruise-ins have been particularly popular. 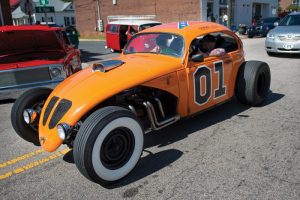 On North Main Street at the China Grove Cruise In on April 21, 2018. (Photo by Rebecca Benson)

“One of my favorite things to do is to walk around and talk to all these folks. And they go to car shows all over. Pilot Mountain has a big car show,” Price said. “They’re starting to become more popular I think, even in Rowan County.”

Jerry Ludwig is one car enthusiast who visits multiple car shows a year. He said he and his wife, Becky, have visited the Pilot Mountain cruise-in, as well as many other nearby cruise-ins.

“We really like this one here,” Jerry said of the China Grove cruise-in.

Jerry has had his blue 1923 T Bucket for about ten years. He said he used parts from Ford and Chevrolet to fix it up.

“These type of cars, you can build them however you want them,” Jerry said. “You can put whatever kind of engine and transmission you want to in them.”

He said the car-creation process makes meeting other car enthusiasts even more enjoyable.

“It’s just cool to get together with a lot of people that’s got the same interest,” Jerry said. “Because even for a person that has a car totally different than this, if they’ve worked on it, they’ve done the mechanics on it or painted it and they do their own thing with it, it’s just a lot of interest between all the different cars to keep everybody together.”

Rick Goodman says that building process is what he loves most about classic cars.

“It’s about creativity,” Goodman said. “When I look at stuff, I’m looking for ideas.”

Goodman outfitted his 1946 Studebaker with a steering wheel made of deer antlers. He said he built the car from scratch in about five months for less than $5,000.

Price said that, moving forward, she doesn’t foresee the event changing much.

“When we started down this path, I talk with a lot of the car enthusiasts and asked them what they wanted. This is kind of the format they want. So I don’t really want to make a lot of changes that aren’t necessary,” Price said. “It seems like a very popular event. Everybody loves it. I get nothing but positive feedback.”

Cruisin’ the Grove events are free and open to the public. The next one will take place June 16.