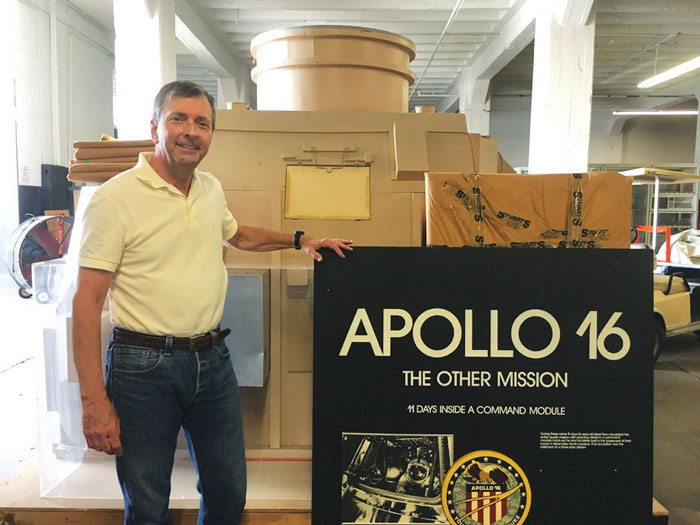 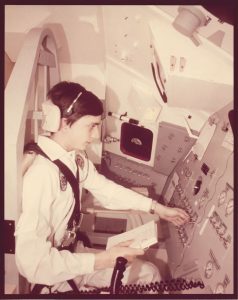 Brad’s presentation will be held at 6:30 pm on Thursday, April 26 in the Fellowship Center of Central United Methodist Church – 172 North 2nd Street in Albemarle.

Following the presentation attendees will have an opportunity to visit the Stanly County History Center at 157 North 2nd Street to see Brad’s Command Module and other memorabilia related to his Apollo mission simulation and items from his long career with NASA.

The event is free, but registration is encouraged. To register call the Stanly County History Center 704-986-3777 or go online to http://historicstanly.org Select the Event Registration tab and be sure to click SUBMIT to complete the online registration.

It was 46 years ago on April 16, 1972 that Apollo 16, the fifth lunar landing mission, launched to fly to the Moon with Commander John Young, Command Module Pilot Ken Mattingly, and Lunar Module Pilot Charlie Duke. It carried a lunar rover for expanded surface exploration and was the next to the last Apollo mission to the Moon. Young and Duke would land their Lunar Module, Orion, on the Moon and accomplish three highly successful walks before blasting off to rejoin Mattingly in the Command Module, Casper, for the trip back to Earth. An awesome and successful mission!

Apollo 16 had another, rather unique aspect that the news media picked up and advertised. A fourth astronaut, or rather junior astronaut, Brad Perry, stimulated the actual mission in real time.

On Sunday morning, April 16, 1972 Perry entered the Command Module mockup for the full Apollo 16 mission. He replicated the astronauts’ duties inside the CM on a real-time basis, to the best of his ability. The Apollo 16 mission, (and Perry’s simulation of it), were very successfully.

Following the actually splashdown, Perry emerged from his Command Module mockup on April 27, 1972 (11 days, 1 hour, and 51 minutes after launch).

Looking back on his almost life-long interest in space and NASA, Perry considers himself fortunate to have had parents that encouraged him to pursue his interest. Did he become an astronaut and fly in space, No, but did he have an amazing career that exceeded his imagination, most definitely Yes!

His NASA career started with the Apollo-Soyuz Test Project in 1975, spanned the Space Shuttle in the ’80s and the design of the International Space Station in the ’90s, and even included 11 years working on NASA’s robotic space missions of the 21st Century.

Please join Brad Perry on Thursday, April 26 at 6:30 p.m. at Central United Methodist Church – Fellowship Center in Albemarle to hear more about his Apollo 16 simulation and his long career with NASA.