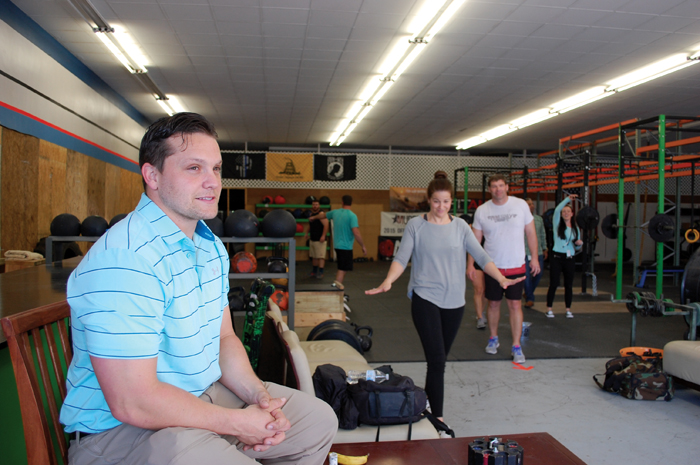 While one of the gym's Crossfit classes goes on in the background, Railway Crossfit owner Brandon Wilson talks about why he relocated his business to South Main Street. (Jessica Coates/Salisbury Post)

SALISBURY — Brandon Wilson said he and his brother have always made up their own workouts.

“We’ve never liked the simple, static stuff. So we were always getting innovative and trying new things,” Brandon said.

That desire for an innovative workout eventually led them to CrossFit, a fitness program developed by Greg Glassman that’s become an international movement.

“The reason it works for the majority of folks is they’re looking for something that’s fun in their workouts,” Brandon said. “A lot of people get bored with going to the gym every day and doing chest, doing back, doing this, doing that.”

Brandon said that, because CrossFit workouts can be changed and adjusted based on what a person wants from it, they are “dynamic.”

“We think it keeps them guessing and entertained so that their bodies are shocked and they see the results they want,” Brandon said.

Brandon has owned Railway CrossFit for almost four years, and the business began in the old General Tire building on East Innes Street.

“Our other building was about as grungy as it gets. We started quite literally in a box in a corner,” Brandon said. “We built a plywood section about 400 square feet. And the roof leaked, but we made it work.”

Brandon said that, as the number of Railway CrossFit customers grew, he had to expand their space six times to accommodate them.

“And, you know, our athletes, they liked the grungy feeling,” Brandon said. “And we provided a clean, safe environment for them to work out, so they didn’t seem to mind it.”

Brandon said they moved only when their building was bought in anticipation of the construction of the new Healthcare Management Consultants office at 201 East Innes St.

“There were some investors who wanted to go in a different direction with the building, and we didn’t fit into that plan,” Brandon said. “But we’re hoping with more visibility here, folks will know we’re here and take advantage of our program.”

Brandon said the new space is about 5,000 square feet, which he said has given him room to put more equipment.

He said he tries to get new equipment multiple times per year.

Brandon said the space has also given him and his trainers a chance to host more programs.

He said that, although he didn’t plan to move from their space on East Innes Street, he’s hoping the move to 314 South Main Street will be a positive one.

When he’s not at Railway CrossFit, Brandon works at Food Lion corporate. He and his wife, Michelle, are both CrossFit trainers at the gym.