Prep Basketball: Players of the Year 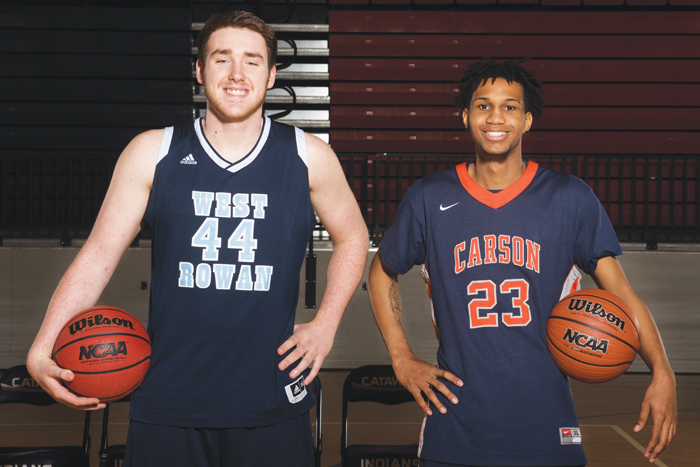 REBECCA BENSON/SALISBURY POST ... Caleb Mauldin, of West Rowan, left, and Jamarius Hairston, of Carson, share the honor of Rowan County boys basketball Player of the Year. Both Mauldin and Hairston are seniors. Mauldin scored 632 points and went over 2,000 for his career. Hairston had 595 this season and 1,659 career points.

SALISBURY  — You can’t have a much better season than the one 6-foot-4 senior Jamarius Hairston turned in for the Carson Cougars. He scored 595 points, averaging 20.5 points per game for a 26-3 team that made school history.

People noticed. There were accolades. Hairston was named first team all-district by the North Carolina Basketball Coaches Association. That means he was perceived as one of the top five players in a 12-county area stretching westward from Rowan, through the foothills, all the way to Boone.

He also was Christmas tournament MVP for leading Carson to its historic first championship.

So Hairston is an easy choice for Rowan County Player of the Year, right?

Mauldin, who has soft hands and nimble feet to go with his size, was a consistent force, somehow pouring in 632 points (23.4 points per game) for an average team.

“We didn’t have the sort of talent level we had my junior year,” Mauldin said. “But you do the best you can. You play as hard as you can and win every game that you can.”

Mauldin got his points even though he was the only Falcon opponents were concerned about. That was impressive. He led wins against South Iredell and North Rowan that didn’t seem feasible, at least, on paper.

But it was perhaps no less impressive that Hairston scored so many points while sharing shots with Jailen Williams and Owen White, two all-county first teamers.

“Jamarius was an efficient scorer,” Carson coach Brian Perry said. “He’s unselfish. He didn’t need a lot of shots. He’d just get a rebound, stick it back in and get fouled. We’d look at the stat sheet after a 25-point night and he’d be 7-for-10 on field goals and 8-for-9 on free throws, with a couple of 3s mixed in. He was a strong free-throw shooter, a great mid-range scorer, and he shot 40 percent this season from the 3-point line.  He can score in so many way. It’s made him tough to guard.”

Mauldin was a solo winner last season when he had a stellar supporting cast and West was the county’s top team. The Falcons had athletic guards Kortez Weeks and Paris Hillie. They also had  rebounder Austin Love, who handled a lot of the gritty work on the glass.

“Caleb was actually much better this year than he was last year,” West coach Mike Gurley said. “He improved every year, and no matter who we were playing, he got it done. He had to play so hard against Cox Mill that he was exhausted, but he battled for 21.”

Mauldin was one of the 10 North Carolina seniors chosen for the The Carolinas Classic All-Star Basketball Game held in Wilmington in late March and played on the victors. That event has become the basketball Shrine Bowl for the neighboring states.

“There was a lot more to it than just the game,” Mauldin said. “We had a chance to visit kids in the hospital and in the elementary schools, and it was a rewarding experience. As far as the game, it was an adjustment because everyone was tall and strong, but I did all right.”

The still uncommitted Mauldin scored 10 points in a game where the rosters consisted primarily of Division I signees.

“He’s smart and he figured out what he needed to do,” Gurley said. “In the second half, he started getting offensive boards and sticking it back in.  He’s just a great kid, he’s been wonderful to coach, and he’s always given us a shining beacon to play the game around. We’ll miss him. We’ve kind of gotten used to that automatic 20 and 10.”

Mauldin’s 23.4 points per game is the fourth-highest single season total in West history, topped only by Scooter Sherrill’s sophomore, junior and senior seasons.

Hairston totaled 80 points in Carson’s four wins against West. He had 13 games this season in the 20s and four games in the 30s. He scored in double figures 26 times.

Hairston was under-recruited for a long time, but he finally committed to Lander University and signed with the D-II Bearcats on Thursday.

“Lander wasn’t really looking for a wing guy, but they came to watch me play against Statesville and West Rowan,” Hairston said. “There’s some pressure when you know coaches are there to see you, but I had good games, and Lander really got intrigued with me. Eventually we sat down and talked and they offered a scholarship.”

Hairston made himself highly recruitable with classroom work that has matched his accomplishments on the hardwood.

He is known as “The Walking Bucket.” Perry called him “The Walking GPA” at his signing party and wasn’t joking. Hairston has a 4.3 weighted GPA.

“My mother is a school principal, so I can’t be slack,” Hairston said. “Classroom success was always expected of me. I may not have loved every minute of it, but I’ve always worked as hard at school as I have at basketball.”

Hairston hopes for a post-basketball career in computer technology.

He’s always been smart enough to keep growing and developing as a basketball player.

“I’ve played a lot in the post at lot at Carson, but at the next level I’ll be a guard, so I’ve really had to work on my outside shooting and ball-handling,” Hairston said. “That work helped us have that championship season that we’ve always dreamed about.”

Perry and Withers are Rowan County basketball Coaches of…