Perry and Withers are Rowan County basketball Coaches of the Year 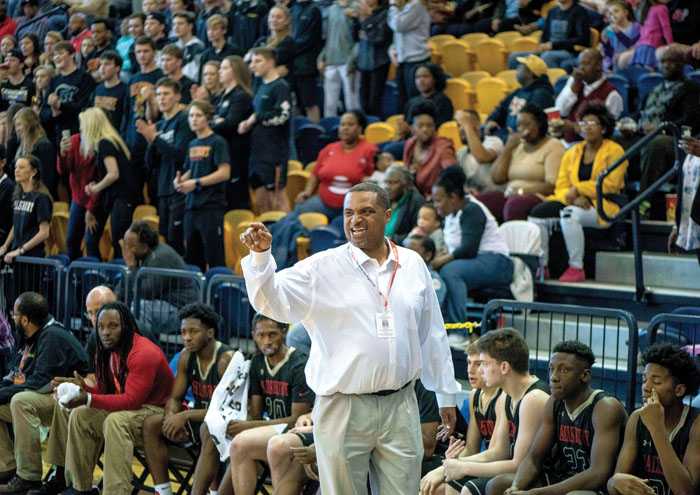 SALISBURY  — For Carson, this was the season everyone had been waiting for.

“Expectations were definitely high,” Carson coach Brian Perry said. “But we still exceeded all of them.”

For Salisbury, this was the season no one saw coming.

“This was not the most talented team I’ve coached,” Salisbury coach Bryan Withers said. “But guys bought in. Guys sacrificed individual stats for team wins.”

Both teams were champions. Both were great. Not good. Not very good. Great.

The Cougars (26-3) and Hornets (27-4) were dominant. Both teams went undefeated in their home gyms. Both were still undefeated when they went head-to-head in the Christmas tournament championship game.

The numbers tell a lot of the story.

The average game for Carson was a 74-59 victory. The Cougars outscored opponents for the season by 440 points. This was the highest-scoring team in Carson history, but it also could get stops when the going got tough. While everyone noticed the 3-pointers and the dunks, this also was one of the best defensive teams in Carson history.

The average game for Salisbury was a 72-56 victory. The Hornets outscored opponents by 498 points. This was the highest-scoring Salisbury team since the 1993-94 season, but it also was the hardest Salisbury team to score against since the 2011-12 season. Even though the Hornets forced a hectic pace with a huge number of possessions, they were still getting stops most of the time. There always was a method to the madness. No matter how frantic and uncomfortable it got, Salisbury was still able to get organized defensively.

In the final NCPreps.com media basketball polls, Salisbury was ranked third in 2A, while Carson was ranked sixth in 3A. Those rankings seem about right. Salisbury wasn’t far from winning the 2A title. The Hornets had eventual state champ Forest Hills in serious trouble in Greensboro in the regional final. Carson was awfully good, probably a bit better than Salisbury, but monster Cox Mill was in 3A, so the Cougars bowed out a round earlier than the Hornets — in a regional semifinal road game at Cox Mill.

When it came to picking a coach of the year for the county, Perry had to be part of it. The former East Rowan standout and West Rowan assistant was there for Carson’s first open gym in 2006 and he guided the Cougars through lots of lean times and occasional good times to get to the level the Cougars achieved this season. This was Carson’s finest season. It came with a conference championship, a conference tournament championship and the Cougars’ first-ever Christmas tournament championship (67-65 over Salisbury).

This is the first county coaching award for Withers, who was Rowan County Player of the Year when he starred for the Hornets in 1987. Perry was honored as county coach of the year two years ago when this year’s outstanding senior class was starting to make its mark as sophomores.

Carson had an exceptional and experienced starting five — four seniors and one junior, three first team all-county players, plus two honorable mentions. There were a lot of nights when the starters scored every point for the Cougars.

“We had a great senior class, guys who could really score,” Perry said. “Jamarius Hairston scored more than 1,600. Jailen Williams scored 1,000. Owen White certainly could’ve scored 1,000, but we sat him down early in a lot of games when we had big leads. Cameron Prugh had health issues in his career, but when he was healthy he was like an 800-point guy.”

While the bench didn’t score much, that group, led by senior Cole Sifford, was instrumental in the Cougars’ success.

“Every guy on our team was a champion in his role,” Perry said. “Those bench guys, whether they played a lot or not, always were invested in our wins and losses. They were always excited. They always brought energy. Without those guys, we don’t do what we did. We ran through our conference (NPC) with  an 11-1 record, and that was a pretty good league. We won three playoff games. We beat Charlotte Catholic in a playoff game where a lot of people believed we were the underdogs.  We made it to the Final Four in the West.  Just very proud of the season we had.”

Withers had a single star, senior Trell Baker, the blur who plays point guard. Around Baker, Withers crafted an unusual squad. There were steady guys who could get the game started for the Hornets, but the serious heat was coming off the bench. Salisbury didn’t lose anything when it went to the bench. Most of the time, it gained.

“The second group,” as Withers liked to call his reserves included wing scorer Zay Kesler, post scorer Lonnie Rogers and fierce, high-pressure defenders Cameron Gill and Jahbreel Russell. That group often put the Hornets in the lead. Then, when the starters returned to face worn-down opponents in the second quarter, the Hornets pulled away.

“It’s not like we didn’t have flaws, but when you play as hard as we did, you can cover up those flaws,” Withers said. “The key to everything was effort, just bringing great effort. Our second group wasn’t worried about not starting, they were just thinking about playing with energy and effort. You look at the best team in college basketball (Villanova), and it’s not one guy and it’s not two guys, it’s a whole lot of guys. That’s what we had — a lot of different guys contributing. We were hard to scout, hard to prepare for, because aside from Trell, there was no way to know who would be scoring.”

Nine Hornets scored in double figures at least once. Elijah Moss could get crazy-hot on 3-pointers. He had a 24-point night. Starter Bill Fisher had a 25-point outing, but in the Hornets’ last two games, it was Rogers providing the post scoring. Gill and Russell could get 10 points off steals. A silky glider in the lane, Kesler had an 18-point night in the playoffs. Hard-driving Oshaun Robinson scored 19 in an overtime win against Thomasville. And so it went. It was the ultimate collective effort.

Give Withers credit for fostering a unique team vibe. Salisbury had just one of the county’s top 10 scorers, yet won 27 games. Salisbury was in all 31 games. The largest margin of defeat was five points.

“Never have I had a group that played harder or played more for each other,” Withers said.