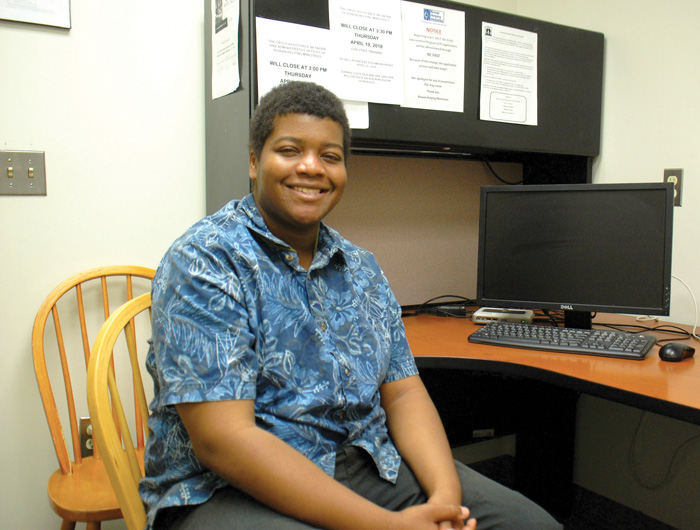 Michael Eaborn, who was living in the Eagle's Nest transitional housing in April, meets periodically in this consultation room, or one like it, with his RHM life coach Carolyn Barker. Mark Wineka/Salisbury Post.

SALISBURY — About every three weeks, Michael Eaborn and his life coach, Carolyn Barker, meet for about an hour and talk, mostly to see how things are going for Michael.

Eaborn, 20, has a steady job at Taco Bell — at least 30 hours a week. He lives in an apartment off North Long Street that’s part of Rowan Helping Ministries’ Eagle’s Nest transitional housing.

He eats with the overnight shelter guests at RHM, and he and Barker get together for their sessions in one of the small RHM consultation rooms across the street.

Barker, a retired English teacher, sees much potential in Eaborn, especially in his writing. She asked Eaborn, who previously was prone to write fictional stories filled with super heroes, to try writing a short memoir for her.

He started his personal story in this way: “My name is Michael Eaborn. I’m far from the average young adult.”

Truer words might never have been written. At age 5, Michael, who is black, was adopted by white parents. It was a big family. He says he had six sisters, four brothers, two dogs and two cats.

He credits his parents with being positive role models who taught him all people were equal regardless of race, age and sexual orientation. His parents also encouraged him to do well in school. According to his memoir, Michael became an honor student who received two school awards: “best in mathematics” and a medallion of achievement.

But Eaborn, who was living in the Triangle area, says he also was an easy target of bullying as he dealt with numerous challenges such as autism spectrum disorder and depression.

“In school, I was a kid that would fade into the background,” he says. He knew he was intelligent — school  tests confirmed as much — but he had difficulty socializing.

“I was constantly bullied all three years of middle school and into high school,” Eaborn wrote in his memoir for Barker. “As a way to cope, I would write fiction stories. This was an alternative to fighting, while being creative in a positive way.”

Eaborn says his characters shared traits similar to teachers and kids he knew. He made himself the main character with superpowers such as flying and heat vision. Eaborn wrote hundreds of pages and developed as many as 30 characters.

His writing obsession sometimes frustrated his mother and further alienated him from his peers, who often asked what kind of project he was working on.

“This distracted me from all the bullying up until the 10th grade.” Eaborn says. “Things became difficult in the 10th grade. …Writing couldn’t ignore the pain.”

Eaborn stopped writing and in February 2013 voluntarily checked into to a psychiatric hospital out of fear he would  hurt himself. He was diagnosed with depression and discharged after 18 days.

But he had fallen behind in school. Michael failed two classes: English and civic economics. He attended summer school to pass English and was able to retake the civic economics class. Michael graduated from Millbrook High School in Raleigh in 2015.

Afterward, his mother and father moved to Salisbury to be with a sister, and Michael stayed in Raleigh at a friend’s house until the friend’s mother told him he had to leave.

Eaborn says he’s lost his housing in Raleigh “due to poor decision-making.” He had been given a month to find somewhere else to live, which led him to Salisbury to be closer to his parents. He has been trying to make it on his own here and acknowledges he is trying to learn “the ins and outs of adult life.”

Before his job at Taco Bell, Eaborn was working at Salisbury Kmart store before it closed.

Michael sees his mother at least once a week. His father is dealing with the onset of Alzheimer’s disease, and Eaborn often stays with him when his mother can’t be present.

Barker, who was not a fan of Eaborn’s fiction, read Michael’s memoir and saw something in its flow and style and how it empowered him.

“I thought somebody needs to see this,” she said. “… He really has deep thoughts.”

Plus, Barker knows from having been his life coach since last October that Eaborn is a highly functioning individual, even with the challenge of autism.

“Having autism is not all that bad for me,” Michael adds.

In one of their sessions, Barker asked Eaborn to write down some of the character traits he wanted to work on. Around his name in the center of a piece of paper, he wrote the words “dependability,” “accountability,” “responsibility,” “compassion,” “perseverance,” “respect” and “integrity.”

At their sessions, Barker offers him advice and suggests things for him to read. “I always come at things from a Christian viewpoint and focus on some of the principles that apply,” she says. “I become personally involved with my clients.”

Eaborn first wants to be self-sufficient and not have to depend on Rowan Helping Ministries’ assistance. It would be nice to further his education, he acknowledges, but right now he can’t afford not to work.

Barker aims at giving Eaborn confidence in himself. She believes he has a solid future in store, maybe even as as writer.

“I think I see it as a gift,” Barker says of Eaborn’s potential, “and I want to open some doorways for him.”