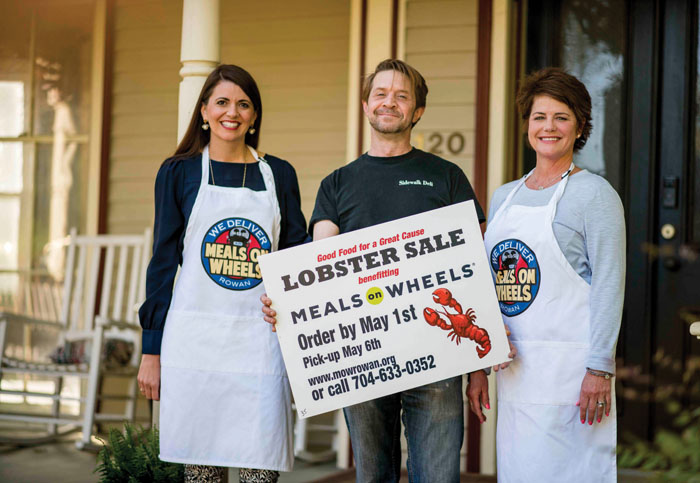 JON C. LAKEY / SALISBURY POST Fresh and steamed lobster is available for order as a fundraiser for Meals on Wheels of Rowan. Co-Chairs of the Lobster Task group Lauren Whaley (left) and Samantha Dagenhart (right) is flank by Rick Anderson, owner of Sidewalk Deli, that will be preparing the Lobster Salad for the fundraiser. Friday, April 20, 2018, in , N.C.

Want to spend a fun and casual spring evening with friends — at a location of your choice — with delicious food you don’t even have to cook? Did we mention it’s all for a good cause? Look no further than the Lobster Sale!

Sponsored by Meals on Wheels, this inaugural event includes live or steamed lobsters with optional trimmings (corn on the cob, coleslaw, drawn butter, lemon, and cracking tools and bibs). There’s also lobster salad for those of us not brave enough to tackle a whole lobster.

Lobsters are $20 each (one-pound size), and lobster salad is $35 a pound. Pick-up is Sunday, May 6, from 3 to 5 p.m. at Peeler Hall at St. John’s Lutheran Church. (Enter on Jackson Street and follow the signs around to the upper driveway.)

All orders are due by May 1.

The idea for the fundraiser came about from Lauren Whaley, who’s co-chairing the project with Samantha Dagenhart and Connie Basinger. Whaley and her husband, Charles, have moved back to her hometown from Raleigh. Each year, a local Rotary Club there hosts a successful lobster sale twice a year. Her husband is a member of the Meals on Wheels board of directors.

Whaley calls the sale a “fresh, new idea” for a fundraiser.

“What a wonderful way to generate publicity and awareness for Meals on Wheels,” says Whaley, who serves as president of the Carolinas Credit Union Foundation in High Point.

Philanthropy is Whaley’s vocation and avocation, and Meals on Wheels is a cause dear to her heart. Her grandmother, Barbara Vogt  — Whaley calls her Bootsie — has used Meals on Wheels for many years.

“I’m a full-time mom and I have a career, and my mother has had some health issues,” Whaley explains. “Meals on Wheels is able to bring my grandmother healthy, nutritious meals every weekday. We are fortunate to have an organization as caring as Meals on Wheels in this community.”

Dagenhart is also Whaley’s aunt, and she’s a longtime Meals on Wheels volunteer.

“Samantha has been delivering Meals on Wheels for at least a decade,” Whaley notes. “Her daughter Olivia often accompanied her. Our participants have seen Olivia grow up.”

Meals on Wheels serves 55,000 meals a year throughout Rowan County with a budget of $639,000, according to Cindy Fink, its executive director. On any given weekday, the organization serves 220 meals over 27 routes with about 60 volunteers — it has 1,000 volunteers altogether. Its budget comes from private donations, grants, participants, and special events. The organization receives a small amount of money from a Community Development Block Grant. Fink is constantly in fundraising mode — writing grants, working with major donors, and requesting allocations from municipal officials.

Fink, who’s been in her current role since March 2017, is looking for events to bring further visibility to Meals on Wheels. The longtime barbecue fundraiser in March is always a big hit, but Fink is looking for a marquee event for the organization.

A Valentine’s Day “non-event” — no ball gown required — raised a significant amount its first time out. Fink was thrilled.

Whaley, who’s been a part of many fundraising events, says the cost of putting on an event can be expensive. That’s why Meals on Wheels chose to have a pick-up for the Lobster Sale. Whaley had a contact for lobsters in Raleigh, which she shared with The Shuckin’ Shack. Owners Larry and Jill Roth and their son, Danny, the general manager, loved the idea, and immediately agreed to receive the lobsters and steam them.

Basinger came up with the idea of lobster salad. It’s being made by Rick Anderson, owner of Sidewalk Deli.

“It is a classic lobster salad,” Anderson explains. “I went through three Southern Living Cookbooks, plus cookbooks from St. Luke’s Episcopal and First Presbyterian. Lauren bought some lobster, and we made four different batches. We taste tested, and found one we really liked best.”

Anderson will combine lobster with mayonnaise, sour cream, celery, Old Bay seasoning, a pinch of salt, Vidalia onion, and fresh lemon juice. It would be perfect on sub rolls, crackers or on a bed of lettuce.

Because the salad will be made to order, Anderson says, there will be no waste whatsoever. “Whatever people order, we will make.” (Same with the sale — no extra lobsters.)

Anderson is donating all the ingredients for the salad except the lobster. Each year, Sidewalk Deli also donates a percentage of sales each Thursday in March during its “March Madness” program.

“It’s been a banner year for donations,” Anderson notes.

He adds, “When I get involved with something, I want to make it successful. Right now, we have more orders for lobster salad than lobsters. Folks know that whatever we make at Sidewalk Deli is good.”

“It is delicious,” Whaley says of the lobster salad. “It is outstanding.”

Whaley and her husband plan to get a group of friends together to enjoy lobster the evening of May 6. It’s a busy weekend, she notes, with the Campbell Golf Classic, Cinco de Mayo and the Kentucky Derby.

“But we will definitely host a lobster dinner, too,” she says.