‘Great American Read’ will challenge and engage you 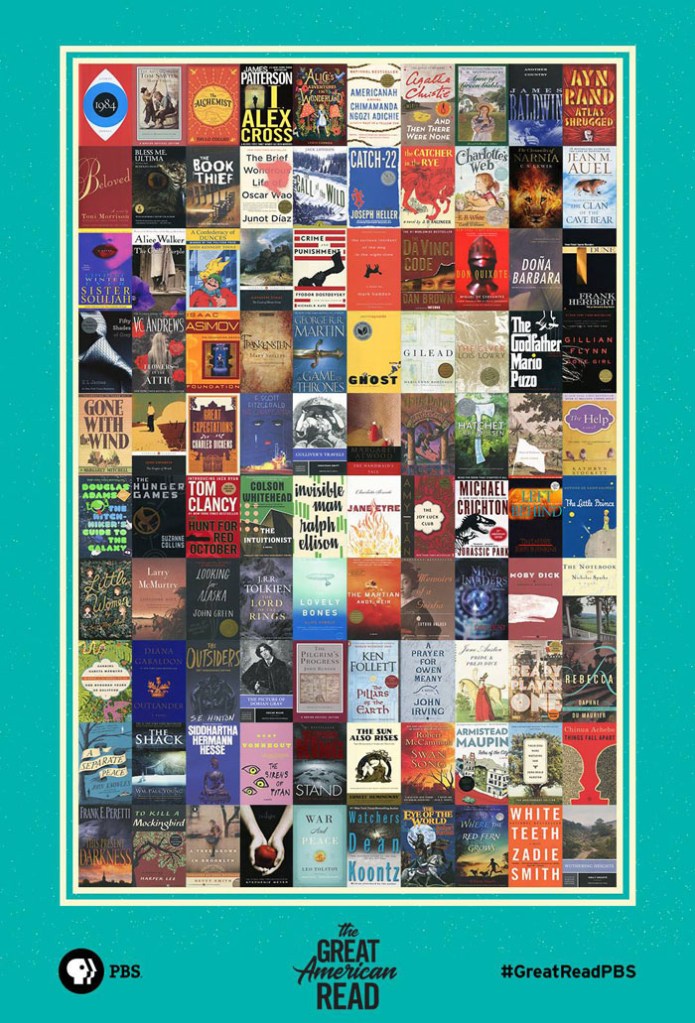 Heads up, book junkies: Here’s a new challenge for you and a chance to learn about America’s reading tastes.

“The Great American Read” is an eight-part public television series that explores and celebrates the power of reading, told through the prism of America’s 100 best-loved novels (as chosen in a national survey).

It investigates how and why writers create their fictional worlds, how we as readers are affected by these stories, and what these 100 different books have to say about our diverse nation and our shared human experience.

The series, set to premiere May 22 on area PBS stations,  features documentary segments, testimonials from celebrities, authors, notable Americans and book lovers across the country.

It is comprised of a two-hour launch episode in which the list of 100 books is revealed, five one-hour theme episodes that examine concepts common to groups of books on the list, and a finale, in which the results are announced of a nationwide vote to choose America’s best-loved book.

Voting will open online and on social media with the launch of the two-hour premiere episode and continue throughout the summer, leading up to the finale in October 2018.

Over the summer, viewers can vote online and through hashtag voting via Facebook and Twitter. In the fall, viewers will also be able to cast their votes by using SMS and toll-free voting.

“A Confederacy of Dunces” by John Kennedy Toole

“A Prayer for Owen Meany” by John Irving

“A Separate Peace” by John Knowles

“A Tree Grows in Brooklyn” by Betty Smith

“The Adventures of Tom Sawyer” by Mark Twain

“The Alchemist” by Paulo Coelho

“And Then There Were None” by Agatha Christie

“Another County” by James Baldwin

“Bless Me, Ultima” by Rudolfo Anaya

“The Book Thief” by Markus Zusak

“The Brief Wondrous Life of Oscar Wao” by Junot Diaz

“Call of the Wild” by Jack London

“The Catcher in the Rye” by J.D. Salinger

“The Chronicles of Narnia” series by C.S. Lewis

“The Clan of the Cave Bear” by Jean M. Auel

“The Coldest Winter Ever” by Sister Souljah

“The Color Purple” by Alice Walker

“The Count of Monte Cristo” by Alexandre Dumas

“Crime and Punishment” by Fyodor Dostoevsky

“Flowers in the Attic” by V.C. Andrews

“The Giver” by Lois Lowry

“The Godfather” by Mario Puzo

“Gone with the Wind” by Margaret Mitchell

“The Grapes of Wrath” by John Steinbeck

“The Handmaid’s Tale” by Margaret Atwood

“Heart of Darkness” by Joseph Conrad

“The Help” by Kathryn Stockett

“The Hitchhiker’s Guide to the Galaxy” by Douglas Adams

“The Hunt for Red October” by Tom Clancy

“The Intuitionist” by Colson Whitehead

“Left Behind” series by Tim LaHaye/Jerry B. Jenkins

“Little Women” by Louisa May Alcott

“Looking for Alaska” by John Green

“The Lord of the Rings” series by J.R.R. Tolkein

“The Lovely Bones” by Alice Sebold

“The Martian” by Andy Weir

“Memoirs of a Geisha” by Arthur Golden

“The Notebook” by Nicholas Sparks

“One Hundred Years of Solitude” by Gabriel Garcia Marquez

“The Outsiders” by S.E. Hinton

“The Picture of Dorian Gray” by Oscar Wilde

“The Pilgrim’s Progress” by John Bunyan

“The Pillars of the Earth” by Ken Follett

“Pride and Prejudice” by Jane Austen

“Ready Player One” by Ernest Cline

“The Shack” by Willam P. Young

“The Sirens of Titan” by Kurt Vonnegut

“The Stand” by Stephen King

“Tales of the City” series by Armistead Maupin

“Their Eyes Were Watching God” by Zora Neale Hurston

“To Kill a Mockingbird” by Harper Lee

“War and Peace” by Leo Tolstoy

“The Watchers” by Dean Koontz

“The Wheel of Time” series by Robert Jordan

“Where the Red Fern Grows” by Wilson Rawls

To read more about the series, take a quiz about the books and more, visit http://www.pbs.org/the-great-american-read/home/