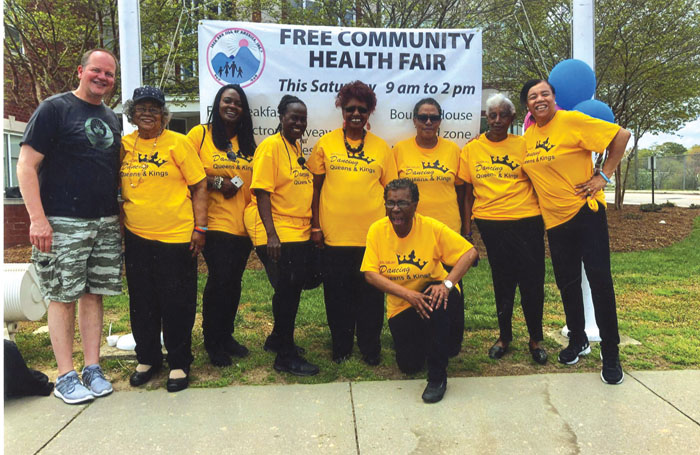 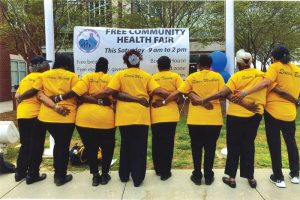 The dancing queens sported special T-shirts with their names on the back.

Some of the female dancers received free mammograms and counseling. Some participants won electronic prizes from a raffle. One of the Queens won a Fitbit. Samples of health products were provided to each participant. Special Yoga and Zumba demonstrations were provided with active participation by the audience.

The Dancing Queens and Kings provided entertainment by dancing three line dances, Love Slide, Roll It Roll It and If I Back it Up. Participants joined in to learn other dances demonstrated by the dance group. Other dances well received by the audience included Shake Your Tailfeather, the Cupid Shuffle and Wifey.

“Rowan County’s recent annual county rankings on health outcomes released by the Johnson Foundation and the University of Wisconsin which was strongly highlighted in Healthy Rowan Meetings, was the catalyst for the establishment of the linedance group,” said member Mae Carroll.

“The dance group’s mission is to help combat obesity and chronic illness in a population of seniors by performing linedancing exercises,” which are held on Tuesdays and Thursdays, 10 a.m.-noon at Hall’s Gym in Salisbury. The group is composed of predominantly seniors, 30 females and one male, aged 55 and up, with a focus on exercise, nutrition and anti-stress strategies.

The Dancing Queens and Kings Dance group was invited to attend the Health Fair by Felicia Stanback.