City-hosted Hackathon hacks challenge of getting kids interested in coding 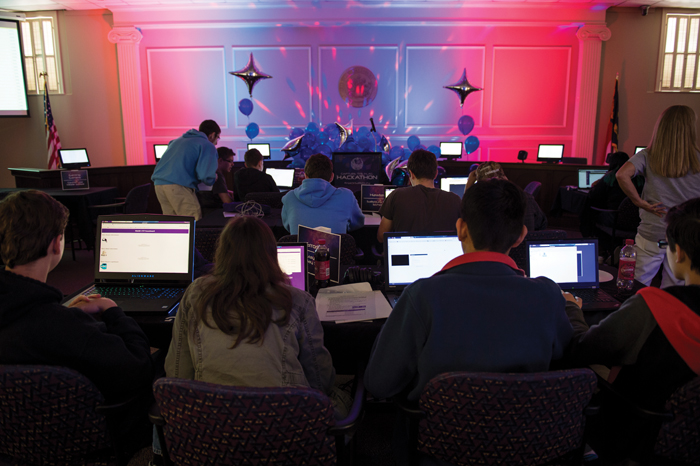 Hackers participate during the Hackathon at City Hall on April 21, 2018. (Photo by Rebecca Benson)

SALISBURY — The City Hall chamber was covered in red and green disco lights. Twenty-two students were typing frantically on their computers.

The City of Salisbury participated in its first Hackathon Saturday morning at City Hall.

The Hackathon — an event meant to motivate kids to learn coding skills — was led by the Mid-Atlantic Gigabit Innovation Collaboratory, or MAGIC, which is based in Westminster, Maryland.

Salisbury participants watched a live stream video of the MAGIC Hackathon as it was happening in Maryland and signed into a program engineered by MAGIC so they could compete with the approximately 140 other participants nationwide.

Mayor Pro Tem David Post said he got the idea to participate in the Hackathon from a colleague he’d met at a broadband conference.

“One of the people I’ve kept in contact with was a fellow named Robert Wack, who’s on the City Council in Westminster, Maryland. And he said to me about a year ago…, ‘Would you guys like to participate in a Hackathon?’” Post recalled. “And I said, ‘Yeah, that’d be kind of cool.’”

From there, Post said he “basically handed the ball to the Fibrant team.”

Fern Blair, the city’s web and marketing services coordinator, played a big role in designing and fine-tuning the experience.

Blair learned to code in high school and said it has “more fronts than you can think of.”

“There’s more types of jobs and you can do a bunch of different things. It doesn’t have to be some genius in a sweater hacking in the dark,” Blair said.

Blair, who was also a coach to the participants at Saturday’s Hackathon, said her goal in designing the atmosphere for the event was to “get kids excited.”

“Because coding is about patience. It’s about perseverance. When you get into trouble and you don’t understand how something works and you can’t get it to work, you have to be able to just keep coming back at it and just chipping away at a problem,” Blair said. “And there’s so many great rewards at the end, but you have to get there.”

The Hackathon participants ranged in age from 13 to 22 years old.

Two of them, West Rowan High School students Matt and Noah Arntsen, said they had participated in a Hackathon themselves at their house last year.

“But this is a much more innovative and I think fun way to do it, to be honest,” Matt said.

Matt said there are two types of hackers — white hat and black hat.

“Black hat is the bad-guy-movie kind of hacking where you can go in, you steal information and you sell it for money,” Matt said. “White hat hacking is where you are hired by a company to do that very thing but to show where the company’s weaknesses are.”

Matt said the goal of the Hackathon was to teach participants how to be white hat hackers.

Livingstone College sophomore Immanuel Terrell said the fact that coding can help people is why he enjoys it.

Terrell said he had never participated in a Hackathon before. But his partner, Livingstone senior Isaiah Claggett, had.

“And I like the creation aspect, being able to make things from next to nothing. Playing God a little bit,” Claggett said.

Fibrant Interim Director Evans Ballard said he was excited that Fibrant was involved in the Hackathon.

“I think it’s a great opportunity for young people who have an interest to have a venue. And the fact that we, on our initial outing, have had this kind of turnout tells you all you need to know,” Ballard said. “It’s very exciting. I hope they’ll do it again in the future.”

Ballard said it was “purely coincidental” that the Hackathon, which took place nationally, was hosted during the North Carolina primary in which voters will decide whether the city should lease Fibrant to Hotwire Communications.

“That being said, you could say that it’s fortuitous for the community that it’s occurring at the same time because it raises the awareness of voters,” Ballard said.

For more information on MAGIC, visit their website. http://www.magicinc.org/