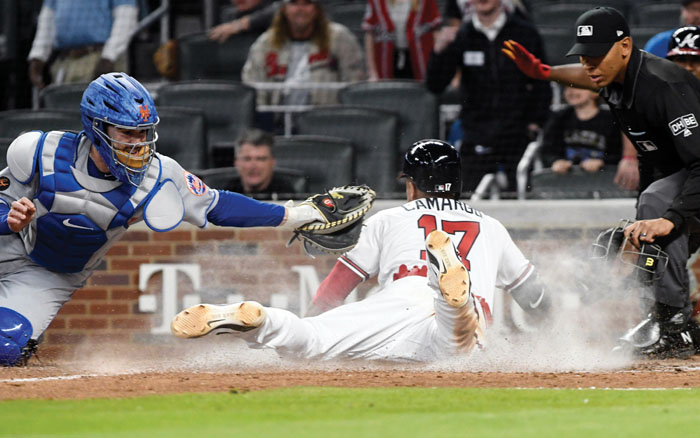 ATLANTA (AP) — A pair of perfectly placed ground balls helped the Atlanta Braves pull off an unexpected win over the New York Mets.

It a took a rare game-tying triple in the ninth inning by Johan Camargo and a better walk-off bunt by Ender Inciarte off New York closer Jeurys Famila, who entered the game unscored upon and tied for the major league lead with eight saves.

A crowd of 41,396 that was the largest of the season at SunTrust Stadium saw starters Jacob deGrom and Julio Teheran each pitch seven scoreless innings.

After they left, the bullpens wilted.

Familia (1-1) issued a leadoff walk to Dansby Swanson and Camargo followed with a grounder right of second base that rocketed past diving second baseman Asdrubal Cabrera and snaked between outfielders Michael Conforto and Jay Bruce to right-center field the wall. That tied the game.

Camargo held when pinch-hitter Kurt Suzuki singled off the glove of Mets third baseman Todd Frazier, and after Familia struck out pinch hitter Charlie Culberson, Inciarte went to plate planning to swing away.

Mets first baseman Adrian Gonzalez was at medium depth, and after Inciarte punched the ball at him with too much speed for Familia to field, the throw to the plate was too late to get the sliding Camargo.

Freddie Freeman hit a two-run double off Jerry Blevins in the bottom of the eighth.

Jesse Biddle (1-0) went one inning for the win in his debut.

“This is a good win for our club, to beat this team like that,” said Atlanta manager Brian Snitker. “It’s got to give our club confidence.

Already struggling on the field — and especially on the mound — the White Sox were dealt another blow Saturday when they learned that reliever Danny Farquhar suffered a brain hemorrhage while collapsing in the dugout Friday night.

MILWAUKEE (AP) — Jesus Aguilar homered on the 13th pitch leading off the bottom of the ninth inning, and Milwaukee rallied for its fifth consecutive win.

NEW YORK (AP) — Aaron Judge hit an early homer off respected Twitter rival Marcus Stroman, then scored on a disputed play during a seven-run burst in the sixth inning that sent New York over Toronto.

Judge put the Yankees up 2-0 with his sixth homer, a two-run drive in the third. It came after Stroman and Judge exchanged tweets at the end of last season during which the Toronto ace said their “future battles will be legendary.”

The Tigers have won five of six. Detroit broke a 3-all tie with three runs in the fifth on a day when both starting pitchers were in almost constant trouble.

Warwick Saupold pitched 2 1/3 perfect innings for his first career save.

Abraham Almonte had three hits for Kansas City, which has lost 10 of 11.