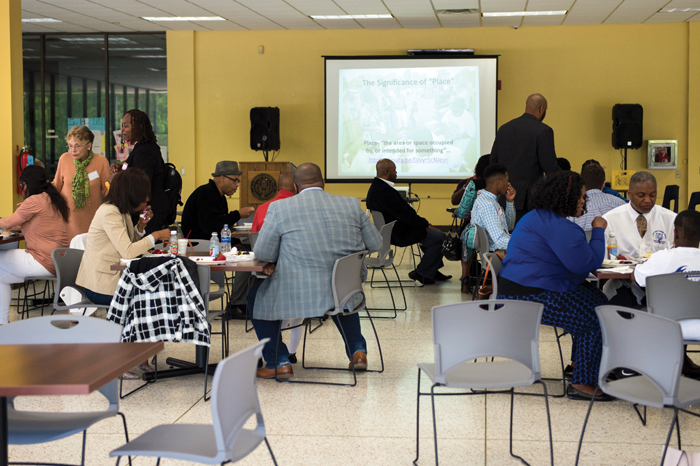 Guests of the Black Leadership Breakfast eat breakfast at RCCC on April 21, 2018. (Photo by Rebecca Benson)

SALISBURY — Kenneth Muhammad El said that, in the last few months, he has felt a shift in Salisbury.

“I felt a shift that the community was missing our presence, our voice, black voice,” Muhammad El said. “And the other thing is I don’t think over the years we’ve done enough to be aggressive and put strategies on the table. So what’s happening is the larger community is left to kind of figure out, ‘OK, where do we go from here?’”

Muhammad El created the Black Leadership Breakfasts in response to those concerns.

“Because there are a lot of things happening, but it’s not collective and it’s not seen as leadership,” Muhammad El said.

Each breakfast, of which there have been three so far, has a different theme. Saturday’s theme was out-of-the-box education.

Muhammad El said that theme was chosen in part because this breakfast was the first hosted at Rowan Cabarrus Community College. The first two were hosted at Firewater Restaurant.

Whitney Peckman, who has helped Muhammad El organize each of the breakfasts, said they only tell speakers the breakfast’s theme and not what to talk about.

“So they’re welcome to interpret that theme in any way they would like to. We try to keep it as open-ended as possible,” Peckman said.

The 17 speakers at Saturday’s breakfast — held at 9 a.m. in the Rowan Cabarrus Community College student center — included Shawn Eckles, who is producing a documentary on the late Civil Rights leader Amelia Boynton Robinson.

Another speaker, Shaun Andrews, built an app he called the “Pandora for self-help and motivational counseling.”

“A user logs in. We ask them a few questions about what’s going on with them. And then we have specialized content specific to what you’re dealing with,” Andrews said.

Andrews said the app — InspireInYou — took him about five years to build. He is a self-taught coder and has dealt with depression himself.

“I wasn’t raised to talk about problems or show weakness. So it was very daunting. And the only therapy that I got was going online and looking at resources,” Andrews said. “And I said, ‘Why isn’t there something that can learn what I’m going through and have information specific to me?’ There wasn’t anything like that, so I created it.”

Ann Morris, the vice president of corporate and continuing education for Rowan-Cabarrus Community College, said she is hoping the Black Leadership Breakfasts will show more people the opportunities the college has to offer.

“And it’s been kind of cool because we’ve had a lot of people saying, ‘Oh wow, this is such a beautiful campus. I’ve never been here before,’” Morris said.

Morris said the college offers a number of free programs, including free counseling for entrepreneurs at the college’s Small Business Center and free seminars on topics like marketing and financing.

Muhammad El said education is “really bringing out what’s in.”

“And technology has the ability to draw out from an individual what’s already in there. We just have to create the room for them,” Muhammad El said.

The next Black Leadership Breakfast will be in May. The theme will be business development.