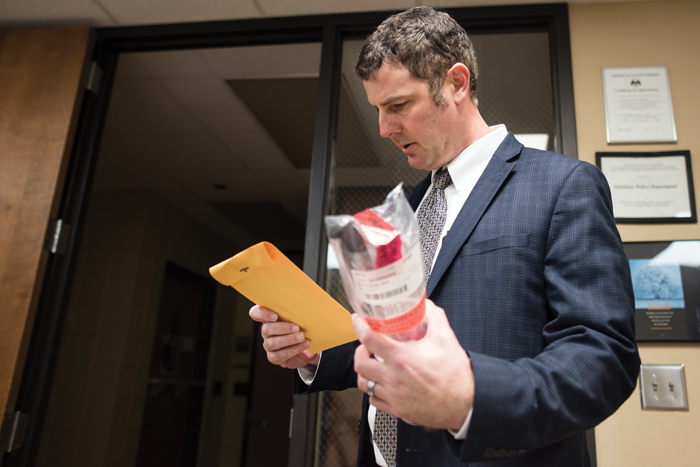 SALISBURY — Salisbury Police detectives are looking into who killed a 75-year-old Salisbury man after he was found dead in his East Franklin Street home. Who wanted Eugene Milton Chunn dead? Was robbery the motive?

Those questions and more are what investigators hope to answer, much of which they plan to answer within the first 48 hours.

Chunn, born and raised in Gary, Indiana, had moved back to North Carolina where many of his family still reside after his father fell ill. He was retired from the steel mill.

A day later, detectives continue to follow up on leads, said Sgt. Travis Shulenburger, who heads the crimes against persons division, which is made up of three other detectives.

Police detectives receive a phone call when patrol officers or other emergency responders discover an altercation or incident is more than just “routine.”

The initial phone call is received from a patrol supervisor to Detective Travis Shulenburger or Lt. Greg Beam and is additionally followed by a call to the on-call detectives — some of whom talk to victims, witnesses or may accompany a potential witness or victim to the hospital.

Regardless of who is on call, they all report first to the crime scene, Shulenburger said.

Sometimes if detectives are spread thin the call may extend to the State Bureau of Investigations, who may help “work” a crime scene.

While at the crime scene investigators interview anyone they can and collect any evidence at the scene that could help with the investigation.

“We collect surveillance video from the area,” he said.

One detective, Brent Hall, has expertise in digital forensics, which extends to any images or recordings obtained.

The collection of evidence at a crime scene can take two hours, 18 hours or more. Collecting and processing evidence can also require assistance from other agencies including the Rowan County Sheriff’s Office, SBI, FBI, the Bureau of Alcohol, Tobacco, Firearms and Explosives and other agencies.

After interviews, evidence collection and the scene is processed, detectives then meet for a briefing to discuss what transpired and their ideas on solving the case as well as divide up a task list.

“Everything we collect goes into a file,” Shulenburger explained.

A detailed record of a homicide investigation is way more than just a memory aid. The case file, which can include hundreds to thousands of pages, is a step-by-step record of the investigation. The file contains witness statements, recorded interviews, crime scene photos, phone records, and forensic and autopsy reports.

The files also include tips from witnesses, particularly those that come from Salisbury-Rowan Crime Stoppers. The organization receives anonymous tips via a toll-free number, social media accounts and online tip line. Those tips are forwarded to the appropriate law enforcement agency and investigator.

The information contained in case files also makes up a case summary that is then presented to the district attorney’s office when a case goes to trial. The summary contains notes, statements, search warrants and body camera footage from every officer at the scene.

New information is added via supplemental reports and summaries.

When a suspect is developed, detectives may use a search or arrest warrant, which gives them permission to enter and search a property or make an arrest. A warrant is authorized after a detective believes he has enough probable cause to make an arrest.

“We don’t stop at probable cause,” Shulenburger said.

Detectives also rely on other evidence and statements discovered throughout the investigation to necessitate a warrant.

Suspects — and in some cases, witnesses — have interviews with detectives inside an interview room at the police department. An interview can take anywhere from five minutes to three hours.

Once an arrest is made, the suspect is “booked,” meaning the agency gathers the person’s fingerprints, photo, or “mug shot,” and in some cases, obtains a DNA sample via a cheek swab. Detectives then escort suspects to the Rowan County Magistrate’s Office where they are read the charges, given a bond and first appearance court date.

Some arrests come easier than others, the detective admitted, while others don’t come to a resolution for years.

Shulenburger recalled the 2013 arrest of Tony Lamont Luther, who actually turned himself in to the Rowan County Magistrate’s Office after he admitted to stabbing his on-again, off-again girlfriend, Tasha Nicole West, in the heart at his Calhoun Street apartment. In 2015, Luther was sentenced to life in prison.

The arrest doesn’t always come easy and can lead to the most often asked question for investigators.

“Why haven’t you made an arrest?” Shulenburger said.

He has heard that question a lot following the December 2016 murder of 7-year-old A’yanna Allen. The elementary school student was killed after someone repeatedly fired into her grandmother’s Harrel Street home. That case remains active.

“We feel like that case is going to be solved,” he said.

Shulenburger said people think when they’ve told investigators who they believe the killer is then an arrest is imminent.

“A lot of times the evidence just isn’t there to make a case,” he said.

He said they understand the frustration of family members and the community.

Shulenburger said one of the biggest elements that can aid a case is getting input from citizens who may have seen something or heard something.

“We have to work very close with citizens to get information and get witnesses to cooperate,” he said.

One of the oldest “cold cases” that police investigators are looking into is the murder of 15-year-old Reesa Dawn Trexler, who was killed June 15, 1984, at the home of her grandparents. Over the course of 34 years, the case changed hands with various investigators and has most recently landed on the desk of Shulenburger.

He said he doesn’t consider the decades-old case cold by any means.

“It is very much an active case,” he said.

The veteran law enforcement officer has begun a review of the case to include talking with friends of Reesa Trexler, family members and others.

He said it’s always more beneficial if the investigator working on the case was also involved with investigating at the crime scene.

City-hosted Hackathon hacks challenge of getting kids interested in…