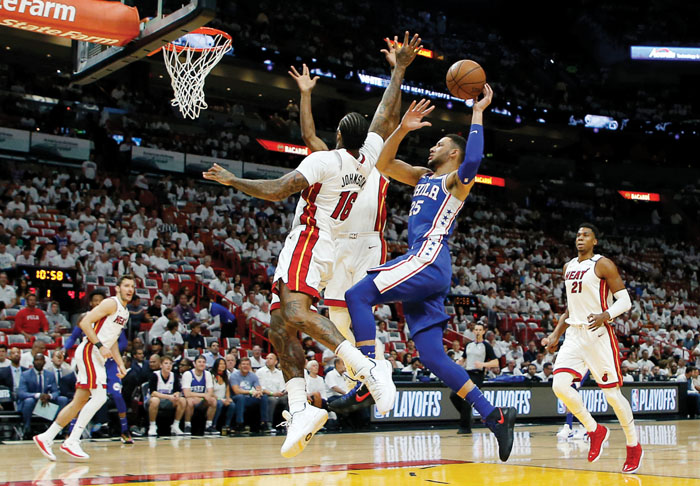 MIAMI (AP) — Ben Simmons had the first playoff triple-double by a rookie in nearly 40 years, JJ Redick scored 24 points and the Philadelphia 76ers outlasted the Miami Heat 106-102 on Saturday to move within a victory of the second round.
The 76ers lead the Eastern Conference series 3-1 and can close out the Heat when play resumes in Philadelphia on Tuesday night.
Simmons became the first rookie since Magic Johnson in 1980 to post a playoff triple-double — 17 points, 13 rebounds, 10 assists. Joel Embiid finished with 14 points and 12 rebounds for Philadelphia.
Dwyane Wade led all scorers with 25 points off the bench for the Heat, who led by 12 points in the second half before letting a game they almost certainly had to have slip away. Wade carried the comeback effort, with the Heat down six and less than 2 minutes left. His three-point play cut the margin in half and his next two field goals got Miami within one each time. The Heat got no closer.
PELICANS 131, TRAIL BLAZERS 123
NEW ORLEANS (AP) — Anthony Davis scored 33 of his franchise playoff-record 47 points in the second half, and the Pelicans completed a first-round playoff sweep of the Portland Trail Blazers.
Jrue Holiday capped his 41-point performance with an 18-foot pull-up jumper that gave the Pelicans a six-point lead with 40 seconds left.
Rajon Rondo added 16 assists, and Davis also had 11 rebounds and three blocks for New Orleans, which is moving on to the second round of the playoffs for only the second time since the NBA returned to the city 16 seasons ago.
C.J. McCollum scored 38 for the Trail Blazers, which responded to a blowout loss in Game 3 by keeping Game 4 close until the final minute. Al-Farouq Aminu scored 27, Damian Lillard added 19 points and Jusuf Nurkic had 18 points and 11 rebounds before fouling out.
TIMBERWOLVES 121, ROCKETS 105
MINNEAPOLIS (AP) — Jimmy Butler hit four 3-pointers among his 28 points and Karl-Anthony Towns snapped back from a bad start to the series with 18 points and 16 rebounds, leading the Minnesota Timberwolves past the Houston Rockets for their first postseason victory in 14 years.
Jeff Teague scored 23 points and Andrew Wiggins pitched in 20 points with another four 3-pointers, helping the Timberwolves match the fire-away Rockets from behind the arc and cruise down the stretch behind a 50 percent shooting performance.
Derrick Rose added 17 points off the bench for the Wolves, who will try to even the series with a win in Game 4 on Monday night.
James Harden led the way for Houston with 29 points, but Chris Paul fouled out with 17 points and the Rockets went just 15 for 41 from 3-point range.
JAZZ 115, THUNDER 102
SALT LAKE CITY (AP) — Ricky Rubio had 26 points, 11 rebounds and 10 assists for Utah’s first playoff triple-double in 17 years, and Donovan Mitchell added 22 points to lead the Jazz past the Oklahoma City Thunder for a 2-1 lead in their first-round series.
Joe Ingles, who had 21 points, made two 3-pointers around two free throws to spark a 13-0 surge that ended on Mitchell’s 3 to put Utah up by 20 points in the fourth quarter.
Rubio’s triple-double was the first by a Jazz player in the postseason since John Stockton in the 2001 playoffs against Dallas.
Paul George scored 23 points and Carmelo Anthony, Russell Westbrook and Raymond Felton each had 14 for the Thunder. Westbrook also had 11 rebounds and nine assists, just missing his ninth playoff triple-double but also had eight turnovers and shot 5 for 17.
___
More AP NBA: http://apnews.com/tag/NBAbasketball