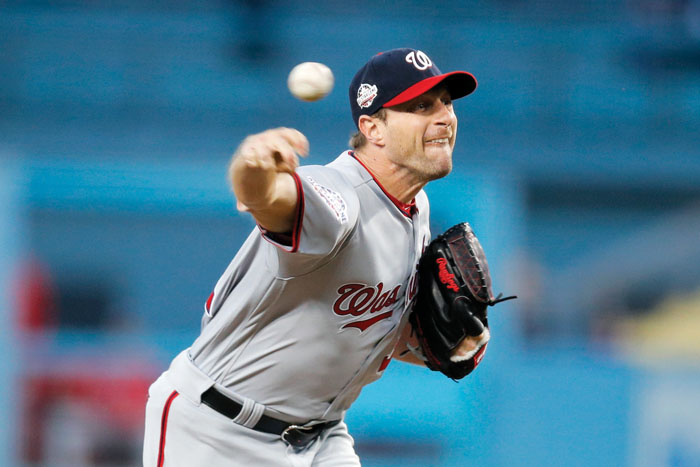 By BETH HARRIS, AP Sports Writer
LOS ANGELES (AP) — Max Scherzer scattered four hits over six innings against Clayton Kershaw in the 13th all-time meeting of three-time Cy Young Award winners and the Washington Nationals beat the Los Angeles Dodgers 5-2 on Friday night.
Scherzer (4-1) struck out nine and walked a season-high three in the first such matchup since 2006.
Kershaw (1-3) gave up four runs and nine hits in seven innings while striking out a season-low four against no walks.
Washington improved to 7-3 on the road and ended the Dodgers’ four-game winning streak.
Sean Doolittle pitched the ninth for his fourth save.
The Nationals wasted no time in getting to Kershaw.
Trea Turner doubled on his first pitch — a 91 mph fastball — to open the game. After Howie Kendrick flied out, Bryce Harper banged an 87-mph, first-pitch slider into right field for an RBI single. He took second on Kershaw’s wild pitch. Ryan Zimmerman followed with an RBI double to center for a 2-0 lead.
Kershaw retired 11 in a row after his messy start in front of 50,211 on an unseasonable 62-degree evening.
Scherzer also gave up a hit to start the game, a triple by Chris Taylor. After hitting Corey Seager in the right leg, he retired the next three batters, striking out two.
The Nats bailed out Scherzer in the third. After striking out Kershaw, he walked Taylor and hit Seager for the second time before the defense turned Yasmani Grandal’s grounder into an inning-ending double play.
Washington added a run in the fifth on Michael Taylor’s bunt single to Kershaw that beat the shift. Kershaw first looked helpless as he searched for someone to throw to and then annoyed when no one covered first.
Kershaw gave up three singles to center in the sixth. Taylor’s RBI came with two outs and had Kershaw ducking to avoid being hit as the Nats extended their lead to 4-0.
Washington made it 5-2 in the eighth after Pedro Baez gave up his third bases-loaded walk of the season to Wilmer Difo with two outs. Baez exited to boos.
Yasiel Puig snapped the Dodgers’ 0-for-6 with runners in scoring position streak with a two-out, two-strike RBI single in the sixth that made it 4-1.
Los Angeles trailed 4-2 in the seventh on Yasmani Grandal’s single off Sammy Solis. The Dodgers had the potential tying runs on and go-ahead run at the plate when pinch-hitter Matt Kemp grounded into a fielder’s choice to second that ended the threat.
TRAINER’S ROOM
Nationals: OF Adam Eaton (left ankle bone bruise) hit in the batting cage and ran and is close to returning. … 3B Anthony Rendon (day-to-day with toe injury) took ground balls and hit on the field. He is likely to play this weekend.
Dodgers: INF Justin Turner (left wrist fracture) took ground balls and hit off a tee for the first time. He says his soreness is dissipating, although no date has been set for a rehab appearance. … INF Logan Forsythe (right shoulder inflammation) took swings in the cage, but still has fatigue in his shoulder. … LHP Rich Hill was supposed to start Friday, but is on the DL with a cracked nail on his middle left finger.
UP NEXT
RHP Stephen Strasburg (2-1, 3.08 ERA) starts for the Nats against LHP Hyun-Jin Ryu (2-0, 2.87) on Saturday. The Nats won both matchups against Ryu last season, 4-2 in LA and 7-1 in Washington. Ryu didn’t factor in the road loss.
___
More AP baseball: https://apnews.com/tag/MLBbaseball