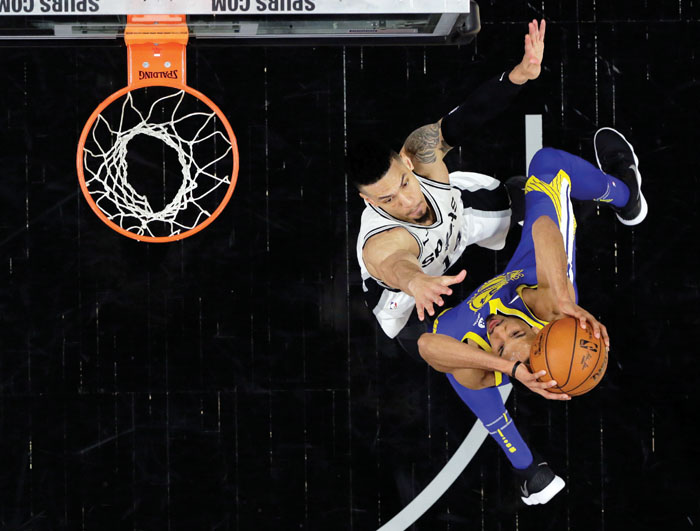 By The Associated Press
SAN ANTONIO (AP) — Kevin Durant had 26 points, nine rebounds and six assists, and the Golden State Warriors beat San Antonio 110-97 on Thursday night for a 3-0 series lead over the Spurs, who were still reeling from the death of Gregg Popovich’s wife, Erin.

Golden State can close the first-round series with a win Sunday afternoon in San Antonio in Game 4.
The Spurs were playing a day after the death of Erin Popovich, who passed away after battling an undisclosed long-term illness. Erin and Gregg Popovich were married four decades and had two children and two grandchildren.

San Antonio did not air a video tribute or hold a moment of silence for Erin in an apparent attempt to make the game as routine as possible for its players, but that was impossible.
Coach Popovich was not in his customary position roaming the sidelines, choosing instead to be with his family. San Antonio assistant Ettore Messina coached the team in Popovich’s place.

76ERS 128, HEAT 108
MIAMI (AP) — A masked Joel Embiid scored 23 points in his postseason debut, Marco Belinelli and Dario Saric each added 21 and Philadelphia beat Miami to take a 2-1 lead in their Eastern Conference first-round series.
Ben Simmons finished with 19 points, 12 rebounds and seven assists for the 76ers, who won for the 18th time in their last 19 games and reclaimed home-court advantage. Embiid went on a personal 7-0 run in the fourth quarter to help Philadelphia extend its lead to 14, and send many in the crowd to the exits.
Goran Dragic scored 23 points for Miami, which got 19 from Justise Winslow and 14 from Josh Richardson.
Game 4 is Saturday afternoon.

PELICANS 119, TRAIL BLAZERS 102
NEW ORLEANS (AP) — Nikola Mirotic scored a career playoff-best 30 points to go with eight rebounds, three steals and a block, and New Orleans beat Portland to take a 3-0 lead in their first-round playoff series.
Anthony Davis had 28 points, 11 rebounds, three steals and two blocks for New Orleans, which can advance past the first round of the playoffs for the first time since 2008 with one more victory.
The 6-foot-10 Mirotic, acquired in a midseason trade after DeMarcus Cousins’ season-ending Achilles tear, made 12 of 15 shots, scoring on everything from quick-release 3-pointers to cutting dunks and fast-break layups.
Damian Lillard scored 20 for Portland, but also missed nine of 14 shots. CJ McCollum scored 22 and Al-Farouq Aminu added 21, but Portland trailed by double digits for most of the first half and all of the second.
Game 4 is Saturday.