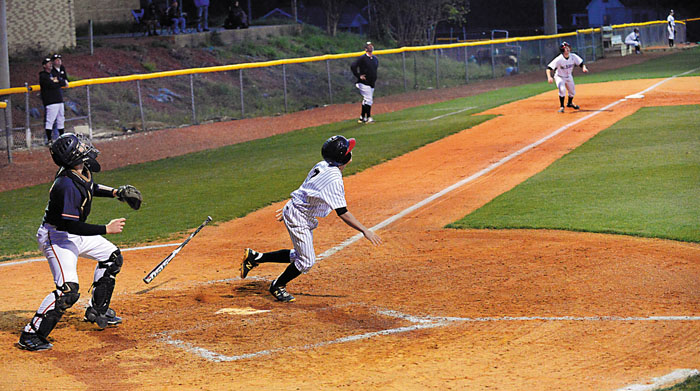 Wayne Hinshaw/for the Salisbury Post ... Salisbury’s Parker Lippard lifts a fly ball with bases loaded during last night’s game against North Davidson. The play turned into a fielder’s choice that plated a run for the Hornets, tying the game at the time, 2-2.

SALISBURY — Anyone wondering how close Salisbury’s baseball team is to contending got their answer Friday night.

The Hornets are within earshot after going bumper-to-bumper with North Davidson — the state’s top-ranked 2A squad — before dropping a 4-2 Central Carolina Conference decision.

“We obviously proved that we deserve to be on the field with them,” losing pitcher Joe Steinman said. “We competed. Every time we play these good teams, it’s like we have nothing to lose. And that makes us play better than we normally would.”

Host Salisbury (13-8, 10-6) absorbed its third loss in its last four games and slipped four games behind the conference-leading Knights (17-2, 16-0). The Hornets descended to fourth place in the league standings with a week to go. Yet they confirmed they belong at the big-kids table and were decidedly encouraged by their performance in back-to-back losses to North Davidson this week.

“Our guys have feel they’ve got a chance every time they come to the ballpark,” said SHS coach Mike Herndon. “And we do. (North Davidson) thinks they can win every game. They know how to win. We’re getting to that point.”

Steinman gave them a fighting chance last night. The senior right-hander spent six innings dissecting the plate with deliveries that crossed at the knees and below. He enticed nine groundouts, allowed six hits and just two earned runs.

“They’re a quality ball club. We knew that coming in,” said North coach Matt Griffin. “We were gonna have to play really well to have a chance to beat them. Fortunate for us, we did that twice. But there’s no question they’re a tough team to face.”

North capitalized on the first of two Salisbury errors to go ahead 2-0 in the top of the first inning. No. 2 hitter Carson Simpson lined a one-out single into left field and scored the game’s first run when Jacob Laflesh’s bouncer was misplayed. Maddox Johnson’s fielder’s choice produced the second run.

“We didn’t play clean tonight,” Herndon said. “And you’ve got to play clean, especially when you go against a good team. It’s 21 outs — not 24 or 25. You can’t give anything away.”

Salisbury rallied to tie the score against winning pitcher Brandon Warlick in the bottom of the fourth. Singles by catcher Bo Rusher, first-baseman Chandler Lippard and outfielder Jack Fisher loaded the bases with one out before teammate Blaine Shellhorn was struck in the helmet with a 2-2 curveball. Then sophomore Parker Lippard lifted a shallow fly ball that grazed off the glove of center-fielder Nick Tiller, who recovered quickly and forced Shellhorn at second base for the second out. The inning ended moments later when Lippard missed a sign and was thrown out attempting to steal second.

North scored the go-ahead run in the top of the fifth following a dramatic, 12-pitch stare-down between Steinman and Simpson, the Knights’ senior shortstop. With a runner on third and two away, Steinman fed Simpson a sequence of low, outside fastballs.

“But every one of them, he would tick off,” Steinman said. “I was trying to get another ground ball. But he kept fighting me.”

Simpson — a right-handed hitter — slapped foul balls down the right-field line, into the backstop, over the screen protecting the nearby tennis courts and finally smashed one off his left ankle. He walked off the pain, returned to the batter’s box and stroked Steinman’s next pitch into left for a run-scoring base hit.

“I just fought off a bunch of pitcher’s pitches until I got one I could drive,” he said. “It was a fastball, belt-high, down the middle. I was right on time.”

Another defensive miscue helped North fortify its lead in the sixth. With two out, Mason Everhart reached on an infield error and circled the bases when Nathan Burton laced a single to the gap in right-center. Burton was retired when Rusher’s peg from the plate nailed him trying to reach second.

There was more adventure in the top of the seventh. With Rusher on in relief, Simpson crushed a ball to deep left field. Fisher turned one way, then the other before snagging the line drive and falling down. “I don’t know how he caught that,” Steinman said after throwing 80 pitches. “Pure skill, I guess.”

NOTES: North Davidson won the 2016 4A state championship. … SHS third-baseman Griffin Myers had five assists, including a diving, highlight-reel snag of Nick Tiller’s smash in the second inning. He quickly recovered and threw the batter out at first. … Salisbury was limited to five singles. Chandler Lippard went 2-for-3 and raised his batting average to .484. … North plays two games against second-place Ledford with the CCC regular-season title at stake next week. The Hornets visit North Rowan on Monday and close their conference season with a pair against South Rowan on Tuesday and Friday.