Early voting off to a slow start in Rowan County 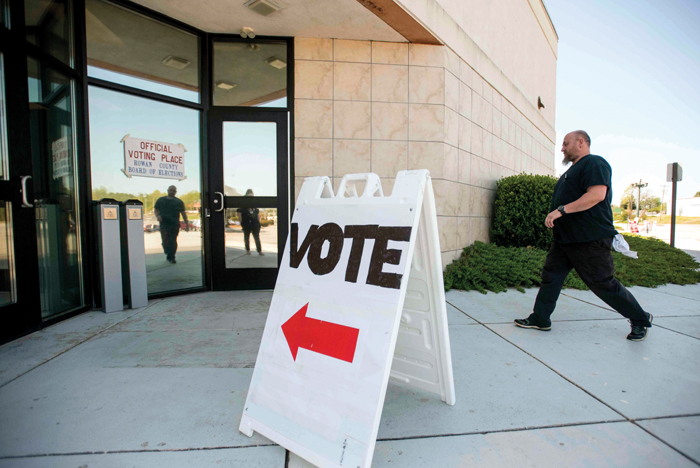 Larry Sanders, from Salisbury, arrives at the Board of Elections at West End Plaza to cast his ballot in April. File photo

SALISBURY — Early voting kicked off Thursday with a predictably small turnout at the Rowan County Board of Elections.

The early voting polls opened in 2014 at Rowan Public Library’s main branch. Then, 387 voters turned out the first day.

Poll workers said Thursday they think the smaller turnout was because of a lack of primary races.

“Since this is not a presidential election, I don’t think it will bring many people out,” said Richard Dillon. “… There’s not any big issues for people. Voters aren’t fired up.”

Two nonpartisan seats are up for election on the Kannapolis City Board of Education.

“There’s no top-ballot race this year to get people excited,” Poston said. “No senatorial races, no presidential races. I had two races to vote for.”

“This is probably more of a normal primary, off year,” said Evans.

Poston was one of three people out electioneering just before noon Thursday. He was joined by Julian and incumbent Commissioner Greg Edds.

Despite the meek turnout, Poston, Julian and Edds stressed the importance of local government. Postan said this will be an “important election cycle.”

“It really doesn’t matter who you come out and vote for. The point is that you need to get out and vote,” he said. “It’s your constitutional right but it’s also your duty as a citizen.”

Julian said the importance of local government is a message he has been sharing at home for many years.

“I’ve preached to both my daughters for years: If you want to make a difference in your local community, get involved in local politics,” said Julian.

Voting will continue Friday at the Board of Elections Office in West End Plaza, 1935 Jake Alexander Blvd. W.

All sites will be open from 8 a.m. to 6 p.m. Monday through Friday.

All locations will be closed on Sundays.