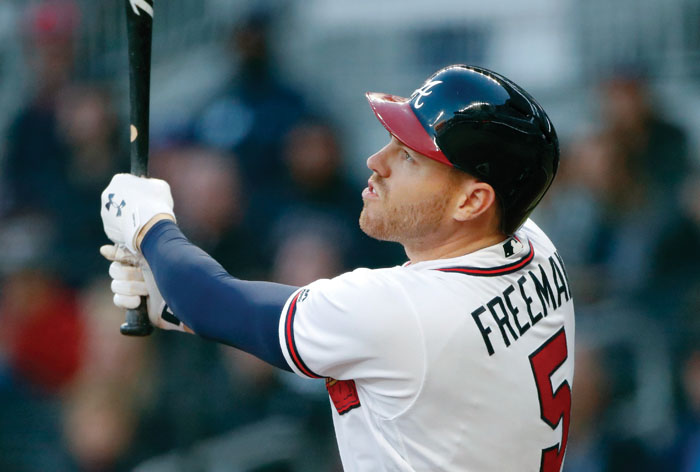 Atlanta Braves' Freddie Freeman drives in a run with a sacrifice fly in the first inning of a baseball game against the New York Mets on Thursday, April 19, 2018, in Atlanta. (AP Photo/John Bazemore)

ATLANTA (AP) — Matt Wisler pitched like he was making a bid to stay in Atlanta for longer than just a fill-in start.

Matt Harvey pitched like he is in danger of losing his spot in the New York Mets’ rotation.

Preston Tucker drove in a career-high five runs, Wisler allowed two hits in seven innings after being called up from the minors, and the Braves beat Harvey and the Mets 12-4 on Thursday night.

Wisler (1-0) was recalled from Triple-A Gwinnett after Anibal Sanchez, the scheduled starter, strained his hamstring and was placed on the disabled list. Wisler impressed by allowing only one run on two hits with no walks.

“That’s the best I’ve seen him since I’ve been around him,” Braves manager Brian Snitker said. “On the attack, pitching to get guys out. I really liked what I saw.”

Wisler made his first major league start since June 10, 2017, also against the Mets.

“I honestly felt kind of like my debut,” Wisler said. “It’s been a long time since I started up here.”

“We haven’t made that determination yet,” Callaway said. “We’ll see moving forward. I’m not sure what we’re going to do.”

Harvey wasn’t receptive to a question about possibly moving to the bullpen.

Harvey at least took pressure off the Mets’ bullpen by making it through six innings. He retired 11 of the last 12 batters he faced and ended a streak of 12 consecutive starts, including his last nine starts of 2017, in which he failed to last longer than five innings.

“That last three innings I think I was able to break through that mental block I was feeling every time I went out there,” he said. “I know that the results aren’t there. I feel bad that it took me so long to figure it out.”

Kurt Suzuki had three hits and drove in three runs, including a two-run homer off Harvey in the first inning.

Todd Frazier opened the fifth with a homer over the 400-foot marker in center field for the Mets’ only run off Wisler. Adrian Gonzalez led off the eighth with a homer off Lucas Sims.

The Mets, who scored nine runs in the eighth inning on Wednesday night to beat Washington 11-5, scored three in the eighth. Sims’ bases-loaded walk to pinch-hitter Brandon Nimmo forced in a run.

Wisler retired the first 11 batters before Asdrubal Cabrera singled in the fourth.

Johan Camargo, a defensive replacement at third base, made a diving catch in front of the Mets’ dugout of Jose Reyes’ short popup.

Mets: LHP Jason Vargas (broken right hand) is expected to make a minor league rehab start this weekend and could be recalled as soon as the following weekend. That has sparked speculation about how the Mets will make room for Vargas in the rotation. “It just so happens a starter is coming back and somebody is going to the pen,” Callaway said.

Braves: Snitker said Sanchez already is showing improvement. Initial concerns were that Sanchez might miss several weeks, but now the Braves hope the right-hander’s time on the DL may be shorter.

Tucker doubled in two runs in the third and added a three-run double off Jerry Blevins in the seventh. His previous career high was three RBIs.

The big night moved Tucker into a tie with Washington’s Bryce Harper for the NL lead with 18 RBIs.

The Mets opened a 10-game trip with their first loss away from home this season. New York’s 6-0 start in road games was the best in franchise history.

Freddie Freeman, who suffered no structural damage to his left wrist when he was hit by a pitch from Phillies left-hander Hoby Milner on Wednesday night, had two hits.

Mets: RHP Noah Syndergaard (2-0, 2.95) will try for his first career win against the Braves when the series continues on Friday night. Syndergaard is 0-1 with a 3.92 ERA in four career starts against Atlanta.

Morton (3-0) retired 15 straight at one stretch and didn’t allow a runner to reach second base.

Marco Gonzales (1-2) allowed three runs — all unearned because of a throwing error by third baseman Kyle Seager — and four hits in 4 2/3 innings.

CHICAGO (AP) — Jon Lester (2-0) was dominant through six innings of two-hit ball in his 100th start as Cub, and Jason Heyward hit a two-run homer.

Kris Bryant and Kyle Schwarber each had two RBIs as Chicago took a 6-1 lead after two innings. Every Cubs starter had a hit, including three by Anthony Rizzo and two each by Heyward, Schwarber and Javier Baez.

Brandon Morrow pitched a perfect ninth to complete a five-hitter and remain perfect in three save chances.

Jordan Zimmermann (1-0) gave up four runs and seven hits in 5 1/3 innings, allowing two home runs to Manny Machado and one to Chris Davis.

NEW YORK (AP) — Aaron Judge hit his fifth home run for a 4-2 lead in seventhm and David Robertson pitched out of an eighth-inning jam.

CC Sabathia allowed two unearned runs over 4 1/3 innings in his first start since straining his right hip on April 6. Chad Green (1-0) retired five straight batters, Dellin Betances pitched a perfect seventh and Robertson delivered a lead to Aroldis Chapman, who struck out the side on 12 pitches for his third save, twice topping 100 mph.

Giancarlo Stanton had an infield single to snap an 0-for-15 skid. He was 1 for 3 with a walk and is 4 for 38 with 20 strikeouts at Yankee Stadium this season.

Neil Walker sparked New York’s two-run second inning by snapping an 0-for-16 skid with a double off the right-field wall. He scored on a single by Ronald Torreyes.

PHILADELPHIA (AP) — Jake Arrieta (2-0) struck out 10 and tossed one-hit ball over seven innings. Yacksel Rios allowed a hit in the eighth and Victor Arano finished the two-hitter with a perfect ninth.

Rhys Hoskins homered and Cesar Hernandez had a three-run single.

MILWAUKEE (AP) — Lorenzo Cain homered, doubled twice and scored four times, and pinch-hitter Ryan Braun launched a three-run homer that gave him 1,000 RBIs. The Brewers erased a 3-2 deficit with three runs in the fifth inning and added seven in the sixth.

Slumping Lewis Brinson, acquired from Milwaukee in the offseason trade for Christian Yelich, celebrated his return to Miller Park with his first two homers of the season for Miami.

Brad Boxberger got Belt to pop out with two on in the ninth inning for his fifth straight save to open the season, a night after allowing the go-ahead homer to Belt in the 10th.

A.J. Pollock hit a solo homer off Ty Blach (1-3) and Ketel Marte also had a solo shot to help the Diamondbacks take two of three from the Giants. Arizona had never opened a season with more than two straight series wins.