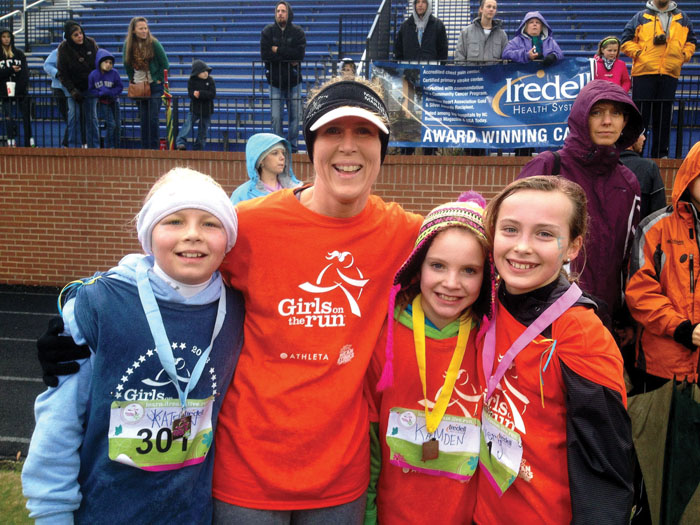 Girls on the Run coach Jennifer Griggs with runners Katelyn Griggs, Camden Johnson, and Avery Carmen after race at Catawba College in fall of 2012. Submitted photo

GRANITE QUARRY — When guidance counselors Jennifer Griggs and Audra Perry began coaching the Girls on the Run program at Erwin Middle School seven years ago, Griggs told her friend, a longtime runner, “You will not see me doing anything but walking.”

Since then, the two have logged hundreds of miles together, even running half-marathons.

The first girls who participated in the program are about to graduate from high school.

“When we started Girls on the Run, the sixth-graders could not participate in sports,” Griggs says. “We felt like it would be a good program for that transitional year.”

Girls on the Run programs were already in place at the elementary school level, but Erwin was the first middle school to take it on.

“Running is just the physical piece of it, and the girls run a 5K at the end of the program,” Griggs says. “The lessons are built so well and are so empowering. They’re getting a lot of skills and tools they can use.”

Every fall at Erwin — other programs take place in the spring — as many as 15 girls can participate in Girls on the Run. Financial assistance is available.

“One year, we had a student who walked to a hot spot to sign up,” Perry notes.

Some years, the program fills in five minutes. Other years, Perry and Griggs have to visit each sixth-grade classroom to encourage girls to sign up.

The club meets once a week after school and once during the week in exploratory classes.

Throughout Rowan and Iredell counties, some 100 coaches volunteer each year for the program, says Kristine Bienstock, program manager for Girls on the Run of the Greater Piedmont. This school year in Rowan County, 17 elementary and middle schools are participating, along with teams from the Hurley and South Rowan YMCAs.

“Each of our coaches volunteers 40 hours of their time every season,” Bienstock says. “That’s a lot of hours. We do have some coaches who are celebrating their 10-year anniversary with the program. They have been coaching season after season.”

Each session ends with a community service project. With 30 to 35 teams in two counties, that’s a lot of projects, Bienstock says. “The girls take a lot of pride in what they do for their communities.”

Running has produced an immeasurable bond between Griggs and Perry, they say.

“It keeps you going,” Griggs says.

They’ve had unforgettable experiences in the program. One of their students had Down’s syndrome and was nonverbal.

“Our girls just took to her and encouraged her,” Perry says. “She finished the 5K race. She was the last one. That was the year my daughter participated, and we ran back and ran the last mile with her. It was just beautiful.”

Another student was from Latin America and did not speak English. She was struggling, and Griggs and Perry thought she’d enjoy the program.

“She understood running,” Perry says. “She ran beautifully, and she connected with the other girls, even without language.”

Now, Griggs says, “she just embraces us when she sees us.”

“There’s definitely a reward in it,” Perry says.

Not that it’s necessarily easy to do at the end of the school day.

“Some days we are drained, and we have to go out there and be positive and encouraging,” Griggs says. “Some girls are receptive, and some are resistant. But after every single session, we’re so thrilled we did it.”

During the 5K races, every girl must have an adult running buddy, Griggs says. “So we get to experience real-life moments of encouraging them along the way.”

The women have developed a three-mile loop through a nearby neighborhood. A lap equals one mile, and the girls can start seeing improved times almost immediately.

“It’s brought a lot of joy to us,” Griggs says of Girls on the Run.