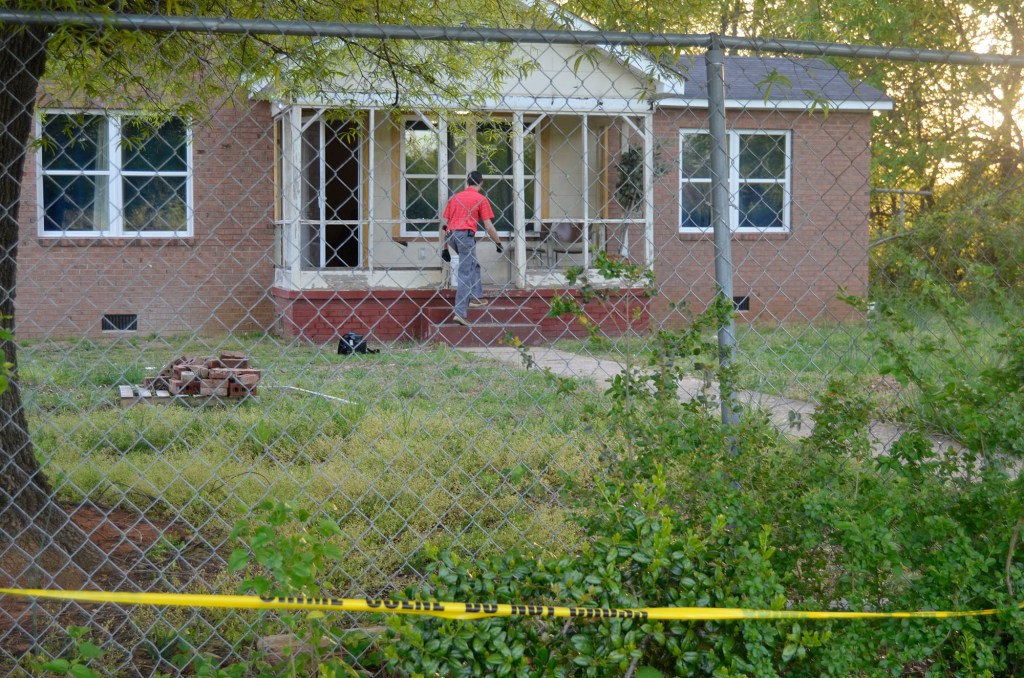 Shavonne Walker/Salisbury Post Investigators working at the scene of an early morning murder in April on East Franklin Street.

SALISBURY — A 75-year-old man was found dead in his East Franklin Street home early Thursday, and police are investigating the death as a homicide.

The Salisbury Police Department said emergency responders were called to the home on an initial report that Eugene Milton Chunn had suffered cardiac arrest.

Officials say at 1:18 a.m., police officers and crews from the Salisbury Fire Department and Rowan County EMS responded to 816 E. Franklin St. They entered the home and found Chunn dead.

Police say there were obvious signs of trauma to the victim’s body. The death is being investigated by the Police Department’s criminal investigations division. Investigators were at the home until just after 7 a.m. Thursday gathering evidence.

Family members say Chunn, who was a retired mill worker, had lived alone, but one of his sons, Juan Chunn, had been staying at the home for a few weeks.

Eugene Chunn, who was known by family and friends as Gene, tried to help anyone who needed help, especially his children, said a niece.

She said Chunn had seven children, one of whom is deceased. His family was from the Rowan County area but moved to Gary, Indiana, where Chunn worked. After he retired and his father’s health worsened, he returned to Rowan County.

“He had jokes all of the time,” the niece said. “He didn’t try to harm anyone. His kids came first.”

Chunn moved back into his home about six weeks ago after repairs following a January 2017 fire that was intentionally set.

Chunn’s niece said he was missing money a week ago.

Neighbor Altovise Walker said she often saw Eugene Chunn driving his Chrysler 300 and saw his son Juan driving him around for errands.

Walker said the last time she saw Eugene was Wednesday when he and his son were in the car.

“It hurts me to my heart,” Walker said of Chunn’s death.

She recalled a day when she and her family were grilling in the yard. Juan Chunn asked if she could cook something for his father if he bought it. Walker said she grilled him a steak and ribs.

Kaco Clodfelter said Chunn was like a father figure to him. His uncle is married to Chunn’s daughter.

Clodfelter sometimes did odd jobs for Chunn, including washing his car.

“My heart goes out to the family and friends and the people that’s close to him,” Clodfelter said.

He said he was shocked to hear of the murder and that it is sad to know Chunn wasn’t safe in his own home.

“He was just a good person,” Clodfelter said.

This is the first homicide in the city of Salisbury this year.

Anyone with information about the case is asked to contact the Salisbury Police Department at 704-638-5333 or Salisbury-Rowan CrimeStoppers at 866-639-5245.